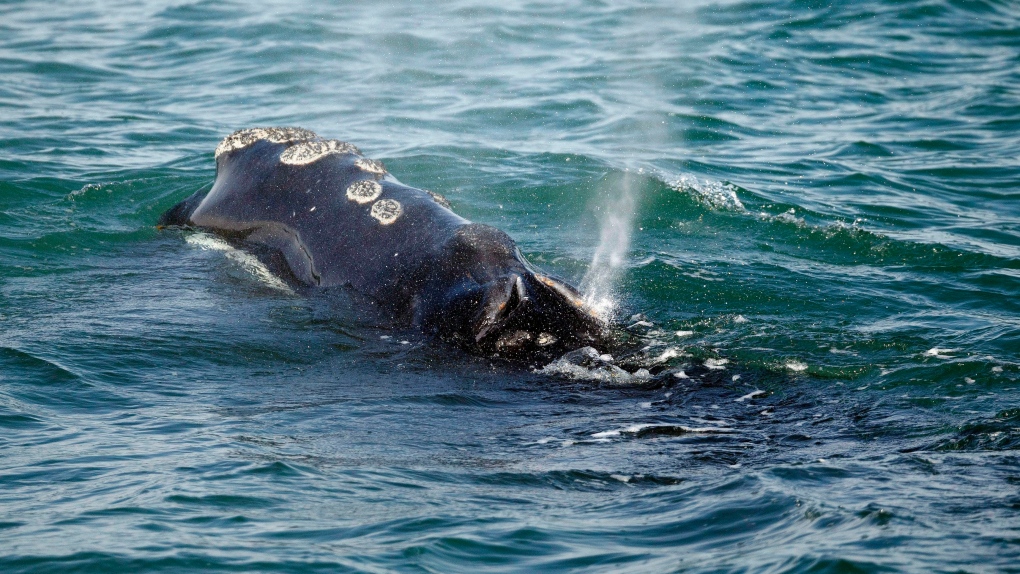 A Canada-U.S. spat over who is responsible for the recent death of a critically endangered right whale has prompted a senior Canadian official to suggest there's got to be a better way of settling such disputes.

HALIFAX -- A Canada-U.S. spat over who is responsible for the recent death of a critically endangered right whale has prompted a senior Canadian official to suggest there's got to be a better way of settling such disputes.

Adam Burns, a director general with the federal Fisheries Department, said government officials on both sides of the border should end the practice of issuing duelling reports and instead create an independent, international panel of experts to make collaborative determinations.

"We don't see any benefit to the whales in having this debate," Burns said in an interview this week.

"We should get back to the important collaboration of protecting North Atlantic right whales as opposed to disagreements over gear that's already entangled a whale. We should be focused on making sure that doesn't happen again, as opposed to worrying about pointing fingers."

The whale was identified as “Snow Cone”, a 15 year-old female, that was previously seen entangled in the U.S. The CWRT was able to remove some of the rope attached to the animal. We will continue to track the #RightWhale over the coming weeks.

Last month, Canadian officials challenged American allegations that fishing gear from Canada was to blame for the entanglement of a North Atlantic right whale found dead off South Carolina on Feb. 27.

At the time, the Fisheries Department said it had determined the gear, pulled from the body of a whale known as Cottontail, likely came from an American inshore fishing boat. But U.S. officials argued the gear was probably used by Canadian snow crab fishers.

A draft American report described in detail how the floating rope pulled from the whale had distinctive knots and mending twine. Those who drafted the report, however, admitted they were not experts on Canadian gear, saying they recognized their "knowledge of Canadian fisheries is limited."

Burns said the federal Fisheries Department plans to release a scientific evaluation of the gear in question, which will confirm the rope probably wasn't made in Canada and that its orange markings are not consistent with Canadian gear. He acknowledged that the gear markings are also inconsistent with those used in U.S. fisheries.

More importantly, Cottontail was not seen in Canadian waters in 2020, despite an extensive monitoring program, said Burns, the department's director general of fisheries resource management. "We've reviewed thousands and thousands of photos and hundreds of hours of video and have not seen Cottontail in any of them," he said.

The origin of the gear is important because a determination that Canada is at fault could trigger a provision in the U.S. Marine Mammal Protection Act enabling the U.S. administration to impose a ban on Canadian seafood imports -- a move that could cripple the industry.

Regardless of the evidence, Burns stressed the more important issue is finding answers without ratcheting up international tensions. And that's why an independent panel should do the job, he said.

Kim Elmslie, campaign director with the conservation group Oceana Canada, said any panel would have to include representatives from the fishing industry. "These are the people who are going to be most familiar with rope and gear," Elmslie said in an interview Wednesday from Ottawa. "It would be great to tap into their expertise."

Moira Brown, senior scientist with the New Brunswick-based Canadian Whale Institute, said the markings on the gear don't provide definitive proof of where it came from. "It's never about trying to attribute blame," said Brown, who has been studying whales for 35 years.

"We are trying to learn as much about this as possible so that governments on both sides of the border can tailor measures to reduce the risk of entanglements. And we're looking for coexistence with the fishery. No one is trying to put them out of business."

The Fisheries Department announced late Wednesday that its officers had helped the Campobello Whale Rescue Team respond to a North Atlantic right whale dragging rope from its mouth near Miscou Island, N.B. The whale, a 15-year-old female identified as Snow Cone, had previously been seen entangled off Cape Cod, Mass., in March, the department said in a statement.

The rescue team on Tuesday was able to remove some of the rope, and the whale appeared to be in good condition. The rope has been turned over to the Fisheries Department, which said its origin is unknown.

There are fewer than 400 right whales left in the North Atlantic. Despite their dwindling numbers, 17 newborn calves have been spotted so far this season, the highest number of births since 2016.

In the past week, six whales have been spotted in the Gulf of St. Lawrence -- three east of New Brunswick's Acadian Peninsula and another three northeast of Iles-de-la-Madeleine. And a seventh whale was spotted southeast of Halifax.

Elmslie said it's important to note the Canadian government and the fishing industry have implemented a series of tough measures to reduce entanglements and ship strikes, the leading causes of death for right whales.

"In Canada, you have so much goodwill and so many people from different sectors trying to find a solution to this problem," she said.

Elmslie said the whales started on a path toward extinction in 2017 when their changing migration patterns led to a dramatic spike in ship strikes and entanglements in the Gulf of St. Lawrence.