For the birds: Halifax delays plan to cut 80,000 trees in Point Pleasant Park 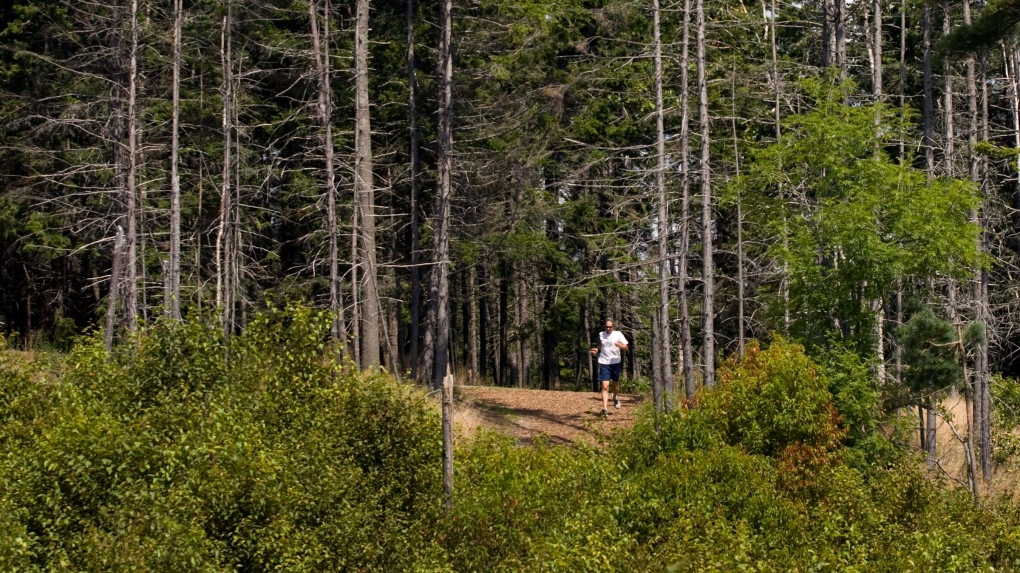 A runner heads through Point Pleasant Park in Halifax on Friday, August 13, 2010. (THE CANADIAN PRESS/Andrew Vaughan)

HALIFAX -- A plan to cut down 80,000 trees inside Halifax's most popular seaside park has been put on hold until the fall to protect the nests of many species of birds, including a well-known but secretive pair of pileated woodpeckers.

Earlier this week, city officials said the cutting at Point Pleasant Park, which is aimed at restoring the health of the park's Acadian forest, would be carried out in June and July.

However, spokesman Brendan Elliott confirmed Friday no trees would be felled until September because an earlier cull would have violated federal regulations pertaining to migratory birds.

"We don't want to disturb those nests -- and the regulations stipulate that we can't," Elliott said in an interview.

Though a tender for bids had been issued to forestry contractors, city staff spotted the regulatory hurdle as part of their due diligence, Elliott said.

"(Contractors) wouldn't have been able to do the work even if we awarded the contract," he said. "So we had to adjust it to September for them to be in compliance."

Elliott confirmed he received one phone call and an email from members of the local birding community who expressed their concern.

"It certainly wasn't on the radar of Halifax when they made the decision," he said. "But I think that they would have figured it out long before somebody made the point of sending them a message."

The 75-hectare park in the city's south end juts into Halifax harbour, where it offers a haven for ducks, seabirds and a large variety of other species including nuthatches, chickadees, sparrows, blue jays, flycatchers, warblers and a small falcon known as a merlin.

The park is also home to a pair of large pileated woodpeckers, which are known for their distinctive red crests and raucous, whinnying calls.

"Those two birds seem to have quite a following," said Currie, who noted the shy birds are tough to spot despite their crow-like size. "There's a lot of people who go into the park just to have a look at them."

Currie said the sound of chainsaws and falling trees in June and July could have spooked the big birds.

"It would probably be something they wouldn't tolerate," he said.

The park lost more than 70,000 trees when hurricane Juan roared up the harbour in September 2003, its peak gusts screeching across the harbour at more than 180 kilometres an hour.

The decision to thin the existing forest is part of a long-term plan developed after the storm flattened large patches of the park.

In the fall, selected trees will be cut down in a 10-hectare area to create room for larger, healthier trees. Of the 100,000 trees in that section, the plan is to leave 20,000 standing by the end of October.

The plan is to cut another 10 hectares each year over the next two years, though the exact number of trees to be cut hasn't been determined. The felled trees will be left to decompose, providing nutrients for the soil.