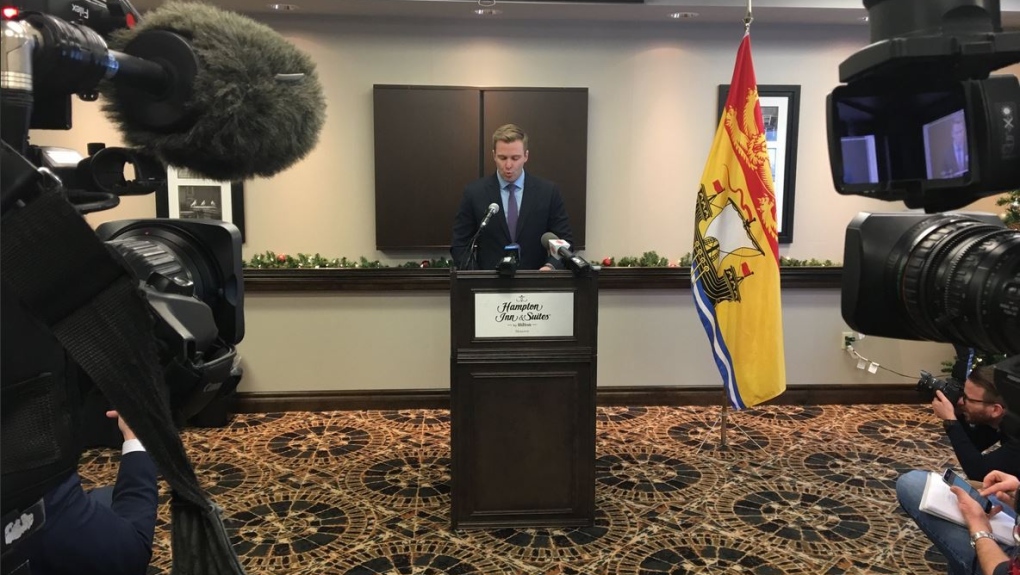 New Brunswick Liberal leader Brian Gallant says he will not run in the next election for premier or MLA. (Jonathan MacInnis / CTV)

MONCTON, N.B. -- Former New Brunswick premier Brian Gallant is stepping down as leader of the provincial Liberals earlier than planned, saying the party needs to move on and choose a new leader.

Gallant said Friday he will resign at the party's next caucus meeting, expected in mid-February.

While he plans to stay on as the member of the legislature for Shediac Bay-Dieppe for the immediate future, Gallant said he won't run in the next provincial election.

"During the holidays, many family members, friends, Liberals, supporters, and New Brunswickers have encouraged me to run again in the next election," he told a news conference in Moncton. "This is flattering but it is also problematic as the Liberal party needs to move on and select a new leader."

Gallant added: "It has become clear that while I still occupy the role of leader, many will be hopeful -- and some will be fearful -- that I will run again in the next election."

Premier Blaine Higgs said that while Gallant's decision to resign as Liberal leader "wasn't a complete surprise," he didn't expect it over the Christmas break.

"I'm sure it was very difficult," the Progressive Conservative leader said of Gallant's decision. "I know the time he spent here he worked hard, he came in obviously with certainly the best interest of the province."

The Liberal leader had announced his intention to resign after his party failed to form a minority government in the weeks following the Sept. 24 provincial election, but said at the time he would not step down until the party had chosen a successor.

He was elected Liberal leader in 2012 and won a majority government in 2014.

Liberal caucus chair Jean-Claude D'Amours said in an interview he's working with party colleagues on the next steps for choosing an interim leader.

D'Amours, a member of the New Brunswick Liberal Association's steering committee, said he's also working on providing recommendations to the board of directors regarding the party's next leadership convention, to be held in Saint John.

"We need to give appropriate time for candidates to announce their intention to run and to tour the province to gather support," he said.

"But we need to remember ... we may have an election any time, so we need to be ready."

Gallant took the opportunity to criticize Higgs during his news conference, saying that the premier is "governing like he has a majority government."

He said given the Tories' plans to cut education and health care funding, "it's quite possible that his government could fall over the upcoming budget."

Gallant said that's why he is making it clear now that he will not be reoffering -- to give the Liberal party time to plan accordingly.

The informal 18-month agreement gives the Tories, who won 22 seats, an extra three seats to earn a 25-seat majority in the 49-seat house.

Gallant said Higgs has given the People's Alliance "all the cards and therefore control of the government's agenda."

But Higgs said he's simply standing up for the province and "fighting for New Brunswick.

"I know it's important to work with my colleagues in the legislature," he told a news conference. "I'm not under any illusions, I do not have a majority government. But I'll do what's right for the province."

NB Liberal leader Brian Gallant says he will not run in the next election for premier or MLA. ⁦@CTVAtlantic⁩ pic.twitter.com/xsd4wCcqB8