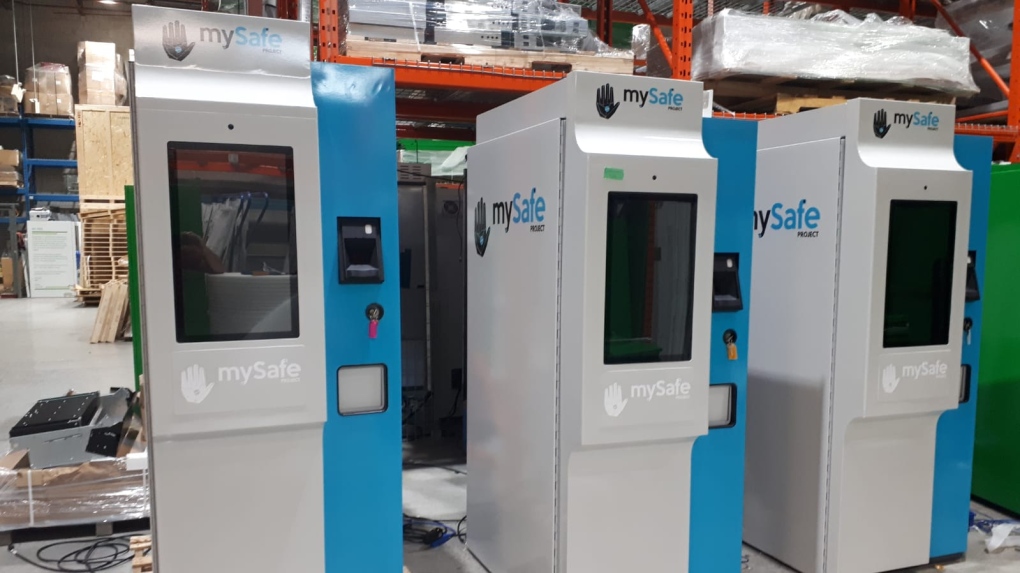 HALIFAX -- A Halifax-area company is rolling out five automated drug dispensers across Canada this week, which can provide safe, doctor-prescribed medication to opioid addicts by scanning their palm.

Corey Yantha, president of Dispension Industries Inc., said his company's machines will be leased to pharmacies and safe injection sites in Dartmouth, N.S., London, Ont., and Vancouver and Victoria, B.C. Dispension will provide all of the data-management services.

"A person can access the machine by simply scanning their palm and the machine will know that this person gets this dose (amount) and it will dispense their medication within 15 seconds," Yantha said in a recent interview.

The machines look like ATMs, weigh about 360 kilograms and are called MySafe Verified Identity Dispenser. They are tamper-proof and provide a safe way for addicts to get clean opioids such as hydromorphone instead of off the street.

The initiative is an extension of a pilot project using the machines that began late last year in Vancouver's Downtown Eastside -- an area that has been at the centre of the opioid crisis.

It's estimated more than 15,000 Canadians have died of an opioid-related overdose since January 2016. More than 5,000 of those deaths have occurred in British Columbia alone.

"We've had a pilot going in Vancouver since December," Yantha said. "We dispensed nearly 4,000 packets of clean opioids to people who were at risk."

The MySafe pilot project is the brainchild of Dr. Mark Tyndall, who has spent 20 years working in harm reduction and is a professor of medicine at the University of British Columbia's school of population and public health.

He said the initial pilot enrolled 20 people, with 10 to 12 participants who remain active for follow-up surveys. Tyndall said there were no overdoses involving people who used the machines and about a third of participants have claimed to have stopped their street drug use.

"The sample size is really small obviously, but it's had a huge impact to the people's lives that are currently using it," he said in a recent interview. "We need more numbers to really show that's happening and the deployment of five more machines will give us some more evaluative power to do that."

A study published Monday in the Canadian Medical Association Journal called on Canada to seek a new approach in battling the overdose crisis.

The study's lead author, Dr. Alexis Crabtree of the University of British Columbia, said an often-overlooked approach is the use of opioids such as methadone and buprenorphine to treat opioid addiction. Researchers showed that few people with those kinds of opioids in their system overdose.

Tyndall said there is street-level support for safe, drug-supply efforts such as the MySafe program.

"The problem right now is getting the system engaged," he said. "Providing an actual safe supply still has a lot of barriers because, in fact, we are asking physicians to prescribe drugs where they have been told not to prescribe because they are dangerous. So getting over that hurdle is ongoing."

Tyndall said the machines are programmed to an individual drug user's needs, while giving them a certain amount of autonomy and also freeing them from stigma.

"If they know that they have a secure supply of these drugs their life changes automatically," he said. "They don't have to get up in the morning and go and steal something or find money in the informal economy."

People registered for the program have to have a history of overdose and also must have tested positive for fentanyl in their urine. An encrypted profile is created for them using data from urine samples and from a biometric scan of the vein patterns in their palms.

Incorporated since 2017, Dispension had been focused on securing distribution of regulated products such as medical and recreational cannabis.

"In 2018 we shifted gears," Yantha said, "to using this technology for harm reduction. We think this (MySafe) is an innovative, cost-effective approach in dealing with an overdose crisis that has dragged on far too long."

Earlier this month, Dispension received a $500,000 loan from the Atlantic Canada Opportunities Agency to help build dispensing machines for the program.

This report by The Canadian Press was first published Aug. 24, 2020.