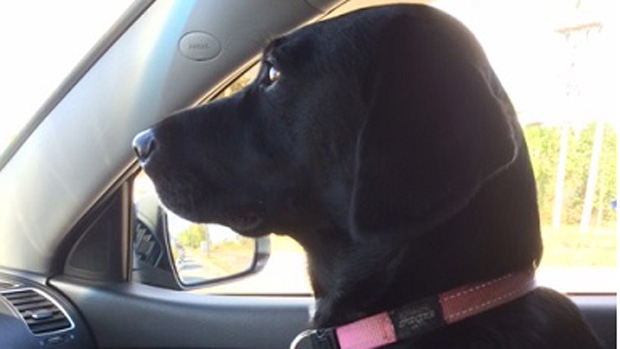 Police are asking pet owners to leave their furry friends at home while running errands this summer. (RCMP)

HALIFAX -- At least three dogs were left in hot cars Tuesday in the Halifax area, prompting an RCMP warning about how fast the heat can become life-threatening.

The force took to social media Tuesday telling people to get the message.

"It's extremely warm out and the temperature can rise very quickly inside a vehicle with the windows up. And I would suggest even with the windows down today it would be uncomfortably hot to leave a pet, a child or anyone in a vehicle for any amount of time," said Cpl. Jennifer Clarke.

"Please leave your furry friends at home, or somewhere nice and cool on this hot, hot day," reads a post from the force on Twitter.

Clarke said the RCMP responded to at least three complaints of dogs being left in cars, and said officers report the cases to the SPCA and try to locate the owners as quickly as possible.

"People still think it's OK if they roll the windows a little bit down and put a bowl of water inside," she said.

Landsburg said people don't seem to realize how quickly temperatures in a vehicle can rise.

"Most of these people that are leaving their dogs in cars are well intentioned people who love their pets. They think if they just run into a restaurant and grab something to eat, they're only going to be 20 minutes or a half an hour. But we've seen first-hand temperatures elevated very quickly in a very short period of time, and it's not safe," she said.

Landsburg said the SPCA gets calls every week, and even had a veterinarian who was ticketed after leaving a dog in a car.

She said tickets are upwards of $700 and are issued on the spot.

"Even if your dog seems to be OK, you are still going to receive the fine because you're leaving your dog in conditions that could cause severe distress," Landsburg said.