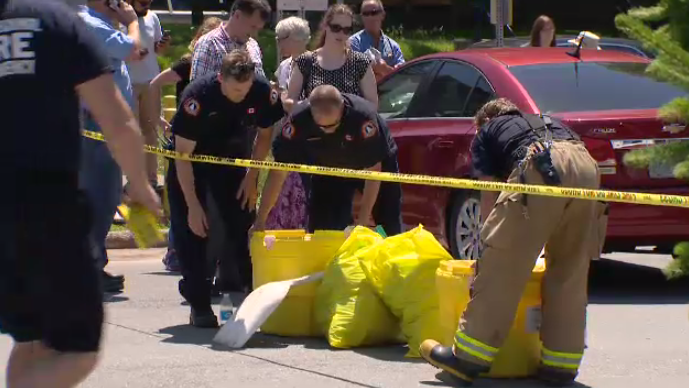 Halifax firefighters prepare to go in and clean up a chemical spill at Dalhousie University on Monday afternoon.

Halifax firefighters responded to a chemical spill at Dalhousie University in Halifax Monday afternoon, but had to take their time before heading in to clean it up.

Dalhousie University evacuated the chemistry building, the Macdonald Building, and the tunnel into the Killam Library after the spill occurred at approximately 1:15 p.m.

The buildings remain closed while a hazardous materials team went in to identify the chemicals.

At 3:30 p.m., Halifax Fire Platoon Chief Mike Blackburn said the team was just about to go in and do the clean-up.

He said it took a couple of hours to research the five different chemicals that were spilled.

“We need to know how they react by themselves as well as with one another,” Blackburn said. “We want to make sure that our team has the proper protective clothing on.”

One injury was reported, but that person was a bystander and not exposed to the chemicals, said Halifax Fire Platoon Chief Mike Blackburn, who described the man’s injury as a “headache” from a “slip-and-fall” accident.

“Anybody that was involved in the transportation of the product was not injured,” Blackburn said.

Chemical storage facility at Dal evacuated. One taken to hospital because of a spill. @CTVAtlantic pic.twitter.com/fZvjUEBfxy

Dalhousie University says the buildings will remain closed until 6 a.m. Tuesday morning at which point the situation will be reassessed.

Update: Dalhousie says the Chemistry and MacDonald buildings will remain closed for the remainder of the day as Halifax Fire continues its investigation of the chemical spill. They will update again before 6 a.m. Tuesday.