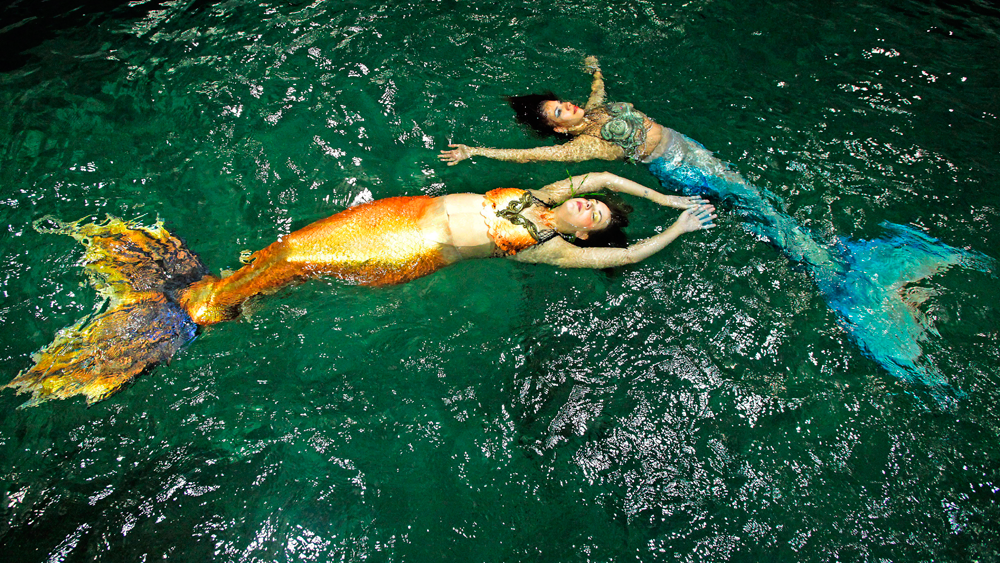 Mermaid Raina (Stephanie Brown), left, and Memaid Mutiny (Krista Hill), of the Halifax Mermaids, float on the surface of the Aquatron in Halifax on Tuesday, August 18, 2015. (THE CANADIAN PRESS/Darren Pittman)

HALIFAX -- Tiny bubbles float to the surface of a tank as Stephanie Brown blows an underwater kiss, her red hair rippling in the water like seaweed as she flips her metallic yellow and orange tail and swims away.

Brown is the co-founder of Halifax Mermaids, a company that provides educational and entertainment experiences with mermaid performers across the Maritimes.

Brown, also known as Raina the Mermaid, has a background in child and youth development and a bachelor of education. She said her company is cashing in on the mermaid trend while teaching children about the environment.

"We work on the assumption that children learn the best through play, so we create these play envrionments where they get to utilize their imagination and also learn something about the environment and the ocean," said Brown during a recent in-costume interview at the Aquatron Laboratory tank, a research facility at Dalhousie University in Halifax.

"We try to combine the entertainment aspect of seeing a mermaid, seeing them swim in the beautiful costumes, but also learning about the ocean and empowering people towards change."

Brown said the roughly five mermaids she employs teach children about everything from microplastic pollution and tidal pool creatures to the ocean food chain and the importance of recycling.

The mermaids wear realistic tails and shell hairpieces at a range of events, from birthday parties to sandcastle festivals and workshops at the Maritime Museum of the Atlantic in Halifax.

Halifax Mermaids, which is a division of Canadian Mermaids Inc., recently won a $10,000 small business grant in a contest that was run by ADP Canada Co. to expand their fast-growing, year-old business, and it couldn't have come at a better time, said company co-owner Sean Norman.

Norman said they are having a difficult time keeping up with demand, and the extra funding will allow them to hire more mermaids and book more events.

"We plan on getting a mobile tank to travel across Canada," said Norman. "It's been an unbelievable year. ... We couldn't have anticipated how much it was going to take off."

Brown said she started working as an independently as a mermaid in 2007 as a way to combine her education in child and youth development and her love for the imaginary sea nymphs.

Brown, who struggles from chronic illness and pain, said her new career helps motivate her to keep in shape and manage her pain.

She said she had a difficult childhood and benefited from programs like Make-A-Wish, so she's paying it forward by visiting sick children in hospitals.

"It's really wonderful to see how much they light up," said Brown, adding that she uses a wheelchair during hospital visits since walking around in a mermaid tail is impossible.

"We just visited a little girl who is finally out of the hospital after a few months and she lives on the ocean, so I swam up to her dock and it was just a really magical experience."

Brown's $3,000 mermaid tail is made with medical grade silicone and fitted with a monofin, which free divers and Olympians use to train for the dolphin kick, she said.

Brown said her company also offers safety workshops for children, parents and lifeguards on the proper use of mermaid tails, which have been growing in popularity in Canada and have prompted some local pools to ban the swimming accessory.