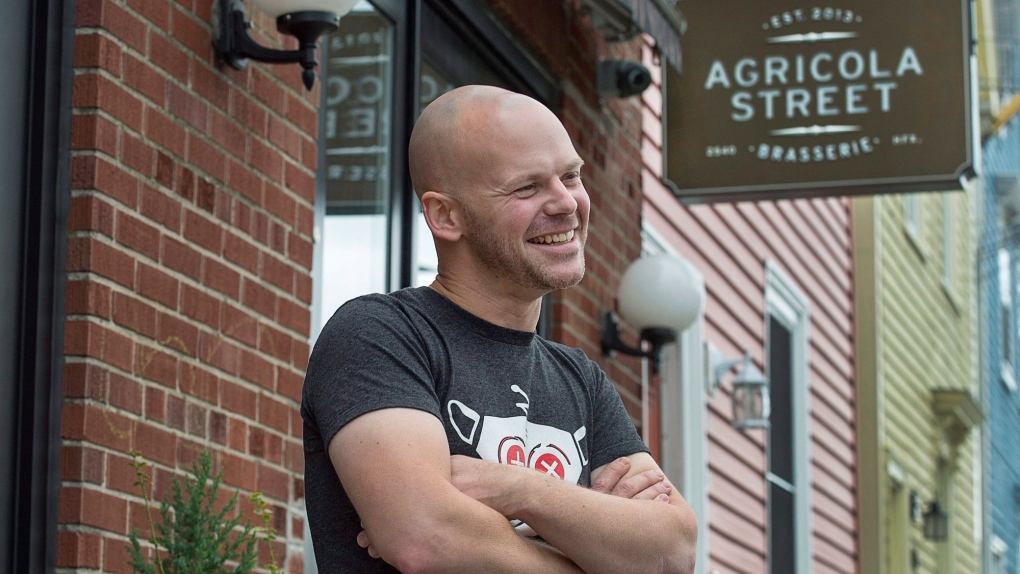 Ludovic Eveno, owner and chef at the Agricola Street Brasserie is seen, in Halifax on Friday, November 4, 2016. It began a few years ago. One by one, food destinations popped up in Halifax's historic North End, in an area previously known for its Salvation Army hostel and methadone clinic. (THE CANADIAN PRESS/Andrew Vaughan)

HALIFAX -- It began a few years ago: One by one, sophisticated, ambitious eateries popped up in Halifax's historic North End.

Restaurants like Edna, Field Guide and the Agricola Street Brasserie emphasized the local -- both in their dishes and their relationships -- and with them came microbreweries, cafes and other foodie enterprises.

Suddenly, the North End was one of the region's most vibrant food destinations.

"The businesses around us, like the breweries, we carry their products. So it's a win-win for everybody and it creates this unique community that's very dynamic."

The area, just north of downtown, is typical of gentrifying urban neighbourhoods: Musicians, young professionals and university students share the neighbourhood with low income families. Trendy Gottingen Street eateries like Ratinaud, an artisanal charcuterie, are neighbours with the Salvation Army and a methadone clinic.

It's the area's affordability and sense of community that has attracted so many young entrepreneurs.

In a city where tourists are otherwise mostly offered seafood and nautical souvenirs, Cory Urquhart, co-owner of EnVie on Charles Street, said the district is somewhere out-of-towners can get a sense of real life in Halifax's North End.

"It doesn't seem quite as touristy," said the 31-year-old Urquhart, who lives a block away from his restaurant and spends virtually all his time in the area. "It's different from the downtown scene because it has more of a homey feel. It's one big community. Everybody knows everybody, and we all work together to make sure everyone is successful."

Bicycles can often be found parked outside of EnVie -- an airy dining space that opened in 2013. Although it's a vegan restaurant, Urquhart said 75 per cent of his customers are not vegan. Menu options include ravioli stuffed with roasted kabocha squash in a dill coconut cream sauce and panko-crushed king oyster mushroom cutlets tossed in a house-made buffalo sauce.

Next door at Lion and Bright -- a cafe-bar hybrid -- young professionals can be seen sipping coffee or local craft beers in front of laptops on rustic countertops that are juxtaposed with industrial lighting and exposed pipe. In the evening, staff crank up the music and customers sit on stools at the bar or gather around long tables, ordering from a large chalkboard drink menu on the wall.

Adjacent to Lion and Bright is the Agricola Street Brasserie, which recently won Taste of Nova Scotia's restaurant of the year award. Dozens of jars containing jam made in-house line shelves in the restaurant's entryway. The high ceilings and intricate shelving at the bar serve as the centrepiece of a restaurant that would be at home on Toronto's Ossington stretch.

The district even drew one popular restaurant away from downtown. The Foggy Goggle, tired of disruptive construction of a massive new conference centre, announced last month it is moving to a stretch of Gottingen, the North End's 250-year-old main drag, that also includes the hip brunch destination of Edna and several other destination eateries.

Restaurants aren't the only food-related businesses that have opened in the North End. There's also Local Source Market, which offers fresh local products and catering; the just-opened LF Bakery, which has the city's best baguettes; and breweries including North Brewing Company and Unfiltered Brewing.

"It appeals to a lot of people who call the North End home and it's attracting people from all over the city. And now visitors to Halifax are coming to the North End to experience food," said Cuttell.

The Agricola Street Brasserie is located at 2540 Agricola Street and is open for happy hour daily from 4 p.m. to 6 p.m. Dinner is served from 5:30 p.m. to 10 p.m. The restaurant is closed on Sundays. For reservations call (902) 446-7664 or email reservations@agricolastreet.ca.