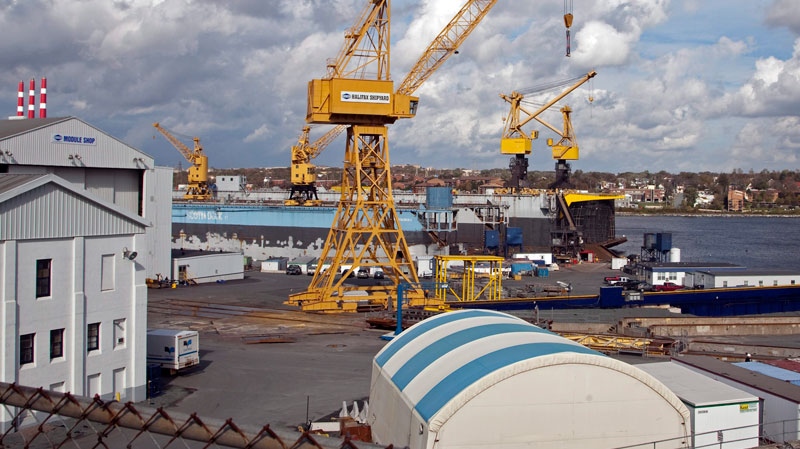 OTTAWA -- Days after signing a contract to build its long-anticipated Arctic patrol ships, the Harper government has quietly indicated it will designate Halifax-based Irving Shipbuilding as the prime contractor on the planned replacement program for the navy's frigates.

The ability to designate which company will be the prime contractor was contained in the national shipbuilding strategy, which designated Irving as the go-to company to construct the navy's future warships.

The yard had already been designated as the prime contractor on the Arctic ships, which are not as sophisticated as the surface combatants will need to be.

A government source said a contract for Irving to oversee the frigate replacement has yet to be signed and will require the approval of the federal Treasury Board when it is drafted.

It's unclear how much the contract will be worth.

The Conservatives have said they're interested in building as many as 15 warships, but experts have warned the corrosive effect of delays and inflation means they will likely won't end up with that many.

Being designated as prime contractor on the next generation of warships is a powerful position, given the money involved, that allows the company a say in designating sub-contractors, including those doing the design and installation of weapons systems.

A leaked Public Works slide presentation also shows it will allow the company to work with the federal government to "reconcile draft requirements" for the warship with the government's proposed budget.

Irving -- under the name Saint John Shipbuilding -- was the lead contractor on the construction of the existing frigates in the late 1980s and throughout the 1990s.

Other defence contractors, all with much more recent experience in major warship projects, had been quietly vying behind the scenes to take the lead on the Canadian project.

The French-shipbuilder DCNS and U.S. defence giant Lockheed Martin were among those interested, although they could now end up as sub-contractors.

Phillippe Lagasse, a defence policy expert at the University of Ottawa, said Irving's lack of recent experience in building warships won't be a handicap if the company goes out and hires the proper talent.

However, he said the federal government's decision to commit itself to the Irvings in such a way will require very stringent oversight.

"I do worry about the federal government's willingness to actually exercise its contractual rights," said Lagasse -- a reference to the delays that plagued the CH-148 Cyclone helicopter contract, delays for which the Harper government was hesitant to punish the manufacturer, Sikorsky.

"You just want to get the thing built -- so much so, you're willing to bend. You're stuck with a contractor to a certain degree and you're going to be stuck with Irving for the surface combatants now.

"Even if you put in protections and incentives, if it comes to the point that you really need the ships, how much are you willing to compromise to get it done?"