Halifax to commemorate explosion that devastated city 100 years ago

HALIFAX -- Sombre ceremonies will be held across Halifax on Wednesday to mark 100 years since the port city was devastated by a wartime blast that killed or injured about 11,000 people.

The catastrophe, known as the Halifax Explosion, remains the worst human-made disaster in Canadian history.

Reflecting on the tragedy, York University professor Jack Rozdilsky says it's important to remember what happened that terrible day, even though it may seem like it was too long ago to learn any lessons.

"Accidents can happen and accidents will happen, despite our new technology and modifications of ways of doing things," says the professor, an expert in emergency and disaster planning. "We still engage in activities that represent a danger to us."

The explosion on Dec. 6, 1917 -- caused by the collision of two ships in the harbour -- represents a cogent reminder that large-scale calamities are not restricted to faraway places.

"It provides for us an important reflection on risk," Rozdilsky says.

Many safety-related changes were made after the Halifax Explosion, including new rules for storage of hazardous materials and harbour navigation.

But there is an important, larger legacy beyond those measures.

The disaster, which left hundreds of people blinded by flying glass, played a crucial role in the founding of the Canadian National Institute for the Blind.

As well, it marked a major turning point for the Canadian Red Cross, which until then had no significant experience with major civic disasters. In 1919, the organization broadened its mandate from wartime relief to formally include peacetime disaster response and medical emergencies.

"A century later, disaster management remains a flagship program, with Red Cross volunteers responding an average of once every three hours somewhere in Canada to events that can be small-scale -- like a family displaced by fire -- or floods, wildfires and other larger-scale disruptions," the Red Cross said in a statement released Tuesday.

Rozdilsky says the disaster also prompted construction of Canada's first public housing project. The Hydrostone rose from the ashes of what remained of the devastated Richmond neighbourhood in Halifax's north end. Spread over 10 city blocks, it features 324 sturdy dwellings made from a type of fireproof concrete.

"We see the Hydrostone district now as being one of the more unique places in Halifax -- a very pleasant place to live," he says.

And while York University in Toronto is a long way from Halifax, Rozdilsky says he can trace the roots of his career to a century ago, when a PhD student from Columbia University arrived in Halifax to study the aftermath of the explosion. In 1920, Samuel H. Prince published his pioneering dissertation, "Catastrophe and Social Change," which is widely considered the first systematic, scientific study of a large-scale disaster.

"The work of Prince was a precursor to our field of study," Rozdilsky says.

York University was the first school in Canada to offer both a bachelor and a master's degree program in disaster and emergency management.

On Wednesday, a Halifax Explosion commemoration ceremony will be held in Fort Needham Memorial Park, not far from the spot in Halifax harbour where the French munitions ship SS Mont-Blanc blew up, levelling much of the city's north end and a Mi'kmaq village on the other side of the harbour.

Residents have been asked to sign books of remembrance placed at Halifax City Hall and Halifax Central Library.

And at 9:04 a.m. -- the exact moment of the blast -- a cannon will be fired from the ramparts atop the Halifax Citadel National Historic Site, the 19th-century British fort that overlooks the city.

Other events include a public reception, author readings, a children's play, a special ceremony for firefighters killed by the blast, and a series of commemorative concerts. 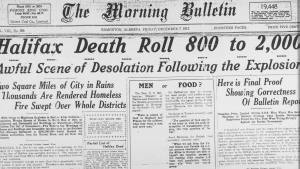