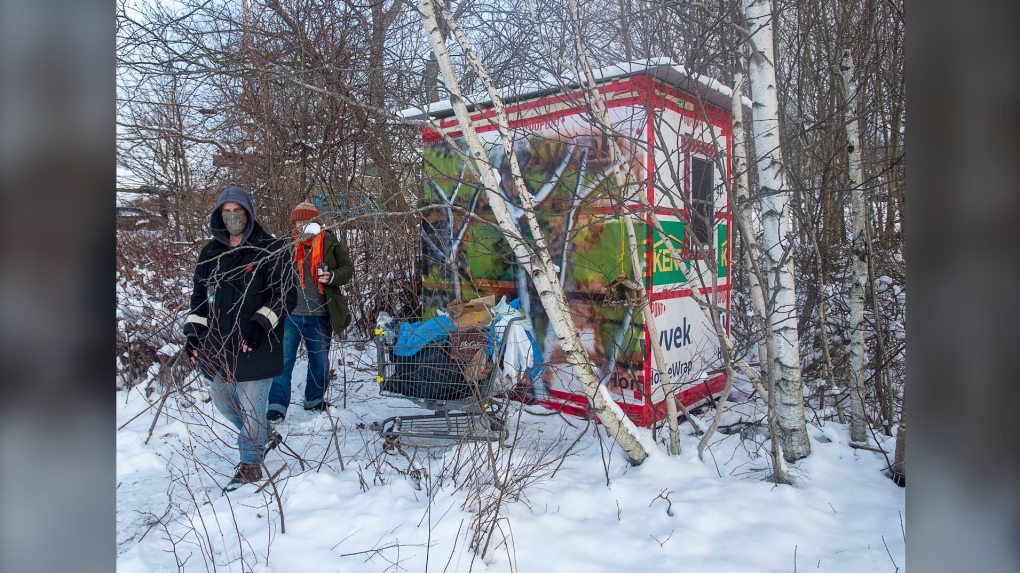 Two men stand outside a shelter in Dartmouth, N.S. on Monday, Jan. 25, 2021. Two structures were built by an advocacy group on Halifax Regional Municipality land as a stopgap measure to deal with the crisis of people living on the street.THE CANADIAN PRESS/Andrew Vaughan

HALIFAX -- A group of Halifax volunteers have become the latest Canadians to begin erecting tiny shelters for the homeless, with two wooden structures going up recently in a gentrifying section of the city's waterfront.

Halifax Mutual Aid built the pair of insulated structures amid a cluster of trees on city land in Dartmouth over the past two weekends.

One of the tiny shelter occupants, Paul, who declined to provide his last name, said in an interview Monday that without the structure he'd be suffering through cold weather in a nearby tent.

He says low welfare rates and the lack of available housing meant he couldn't find safe shelter for over three years before the small building went up.

In Toronto, a similar effort made headlines last year after a local carpenter, Khaleel Seivwright, began building tiny portable shelters for people living on the streets.

Halifax officials said in a statement Monday that residents of the "homeless encampment" in Dartmouth would not be evicted unless and until their need for adequate shelter is met.

The city noted the activity of erecting shelters on municipal land by "is not permitted without approval," but said it would work with Halifax Mutual Aid to find other options for the homeless.

The non-profit group, which did not respond to emails or requests for an interview, says on its website that it is building the structures because it believes governments aren't adequately addressing housing shortages for the city's poor.

The Affordable Housing Association of Nova Scotia estimated in a recent study that during the pandemic the city's homeless population had reached 477 people.

Halifax Mutual Aid says it believes local governments have ample resources to solve this level of homelessness, "but they refuse to."

The group listed three vacant public buildings that it said could be converted into social housing, adding, "these three empty properties alone could provide more than enough housing to all those who are currently unhoused in our city."

However, until this occurs, the aid group says it will continue building watertight, insulated buildings, each of them about 1.8-by-2.4-by-2.4 metres in dimension, with small windows and safety features such as carbon monoxide and smoke detectors.

In an interview at the Dartmouth site, Paul said he had taken up the group's offer to build him a home but doesn't wish to become embroiled in controversies over housing policy. He has painted a pattern of birch trees on one side of his new residence to help it blend in with its wooded surroundings.

"The insulation is better than vinyl tents. The fact I can lock the door is pretty cool. I'm secure. I'm safe," he said.

He said he was "perfectly fine" with the arrival of a neighbour, Andrew Goodsell, a few metres away in the second structure put up over the weekend.

Sam Austin, city councillor for the area, said he has been receiving many calls from local residents concerned about the appearance of the second shelter that Goodsell is occupying.

The councillor said he agrees with the city's stance of not forcibly evicting people after they've moved in, and he had been comfortable with the first shelter's purpose of protecting a homeless person's safety. However, he said he worries the second shelter could signal a growing encampment.

"Allowing a third party, an anonymous one at that, to build a shelter village wherever it strikes them, with no consultation with the Halifax municipality or with other local residents ... that doesn't make sense to me," Austin said in an interview Monday.

He said it would be preferable for the group to provide shelters at diverse locations where homeless people are sleeping outdoors rather than creating a concentrated encampment in one small area.

Hannah Wood, the chair of the Halifax chapter of the Association of Community Organizations for Reform Now, said in an interview the building of the shelters is a sign of growing frustration over governments' response to the housing shortage.

"It makes a powerful statement that people are compelled to give up their free time to do such a thing," she said in an interview.