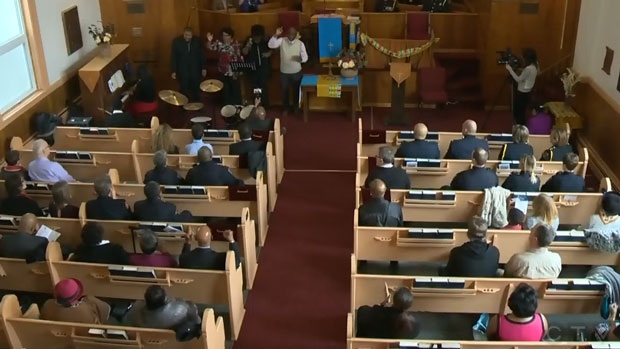 The historic Cornwallis Street Baptist Church is now distancing itself from a controversial part of Halifax's past: The city's founder.

HALIFAX -- For 185 years, the white clapboard church in Halifax's north end has been a gathering point for the African-Nova Scotian community, a place of worship, Sunday barbecues and winter coat drives.

It was founded by the son of a slave, and survived the 1917 Halifax Explosion.

But the historic Cornwallis Street Baptist Church is now distancing itself from a controversial part of Halifax's past: The city's founder.

The church has launched a contest inviting members of its congregation to suggest a new name for the pre-Confederation house of worship, originally called the African Baptist Church.

"Even though we're named for our location, it still has that negative connotation for our Mi'kmaq brothers and sisters," pastor Rhonda Britton said in an interview. "We don't want to contribute to people's oppression. We want a new name for the church that reflects who we are and what we stand for."

Shortly after arriving in Chebucto Harbour in 1749, Col. Edward Cornwallis issued a reward of 10 Guineas on Mi'kmaq scalps. The British soldier's violence towards Indigenous locals has prompted calls for his name to be removed from schools, rivers, streets, parks and monuments.

Opponents have argued that striking his name from public places is an attempt to "rewrite" or "erase history" and warn against judging an historical figure by modern standards.

Yet others say there is a difference between teaching history in books and classrooms and honouring people who incited genocide.

"You can't erase him from history and nor do you want to because it's important for you to know your history and remember your history," Britton said. "But you don't have to erect statues and glorify that ugly history."

While debate in the province over naming monuments and places after people from the past has largely focused on Cornwallis, a move by Montreal to remove the name Amherst from a street has prompted discussion about a small town in northwestern Nova Scotia.

On Thursday, Premier Stephen McNeil said governments should be sensitive to the concerns of Indigenous groups and strike a balance whenever possible. But he cautioned against moves to rename places, saying "you can't ignore our own history."

He added: "You can't eliminate it."

But Britton dismissed the suggestion that changing the name of a street or town would alter the past.

"You can't change history. We can't go back in time," she said. "But we can decide who we're going to honour."

The church is accepting submissions from members until Oct. 15, and a new name is expected to be chosen at the church's annual meeting in January.

A committee has been formed to choose the winning name, and Britton -- who is not on the committee -- declined to reveal her top choices so far.

It's not the first time the church has advocated against honouring Cornwallis in public spaces.

Two years ago, Britton penned a missive calling on the city to rename Cornwallis Street.

She suggested naming the street after a prominent African-Nova Scotian, such as Rev. Richard Preston, the church's founder; Rev. William A. White, who worked at the church for nearly two decades; or civil rights pioneer Viola Desmond.

Britton also suggested naming the street after a concept, such as Unity Street or Harmony Street. She did not receive a response from the city.

However, city council voted last spring to review the commemoration of the city's founder on municipal assets, including Cornwallis Park and Cornwallis Street. An interim report with the terms of reference and a recommended composition for an expert panel to review the issue is expected in the coming weeks.