Hundreds of ancient artifacts discovered at ancient campsite near Fredericton

Hundreds of ancient artifacts have been discovered at an archaeological dig site near Fredericton.

Archaeologists were brought in after a highway construction crew, working just metres away, began finding things that seemed significant.

The rare discoveries are unearthing the history of those whose ancestors called the area home.

“Just to know that they were having a fire right in this exact position,” says Tyson Wood, a Field Technician from Saint Mary’s First Nation. “You know, my ancestors were all sitting around this beach shore, having a fire, fishing, and camping.”

Shawna Goodall, also a Field Technician, is in awe of the discoveries.

“Just to hold an artifact in your hand, that you know that you’re the first person to hold that in 13,000 years, you get goose bumps every single time,” says Goodall of Tobique First Nation. “Every single artifact - that never goes away, that feeling.”

Those early inhabitants once made their fire pit on the site and used a tool found on site to clean animal hide.

“This gives us our only glimpse into what people were doing during this time period,” says New Brunswick’s Provincial Archaeologist Brent Suttie.

Archaeologists say the site is a major discovery, incredibly rare, and fills a chronological gap that was missing in Maritime history.

“We have a few sites down in the Pennfield area, and then we have very famous sites in Debert, Nova Scotia - that date back to 11,600 years old,” says Suttie. “We don’t have anything between those two sites. This site just happens to fall within that.”

It is one of the first sites to be found in this time period in Eastern North America.

Workers found the site two years ago, while constructing the Marysville Bypass. There was a stop work order, then an impact assessment.

Enough of a discovery was made, that the department of transportation ended up avoiding the area – and building around it.

“This could be one of the most important sites that I work on in the next ten years,” says Wood. “For it to be my very first one, it’s just a great feeling.”

So far, the team has been on the site for about three weeks, uncovering the unexpected and filling in a gap in history. 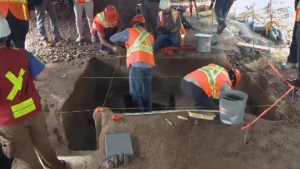