Hurricane Dorian expected to impact the Maritimes this weekend

Dorian remains a Category 2 hurricane as it spins closer to coastal areas of the southeastern United States, including Florida, Georgia, and the Carolinas. 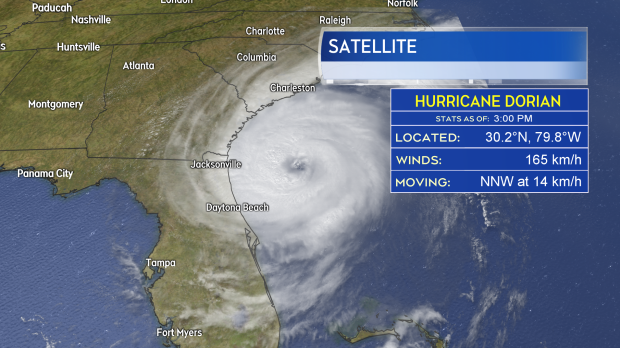 The latest forecast from the National Hurricane Centre predicts that the hurricane will skirt just off the coast of those areas into Friday morning, before making a possible brief landfall in the barrier islands of North Carolina.

From there, the storm is expected to speed northward to position just south of Nova Scotia before the track could take it into an area stretching from the Bay of Fundy to Sable Island.

While confidence is high that there will be some impact from the storm on the Maritimes and Atlantic Canada, conditions in the forecast will vary widely, depending on the precise path the storm takes as it passes. There is a higher degree of certainty in the timing of the storm, and for the Maritimes, the onshore impacts can be expected on Saturday. 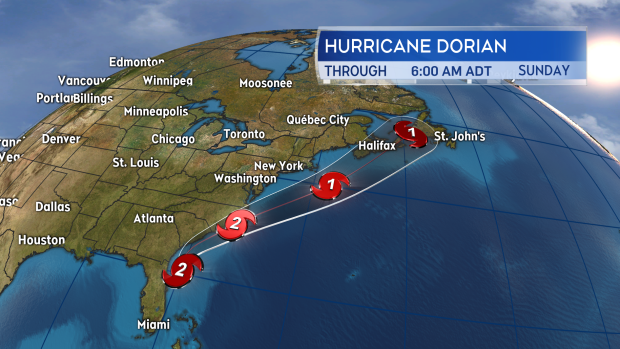 The most probable scenario at the moment is that Dorian will enter our marine waters in the vicinity of Georges Bank. From there the storm will close on the Atlantic coastline of Nova Scotia passing close to or over Cape Breton before heading into western Newfoundland.

With a storm such as this, the strongest winds would occur on the eastern side of the track while the heaviest rain would fall to the west. This track would place Nova Scotia, Prince Edward Island, and southern areas of New Brunswick into heavy rain sourced by tropical moisture. That increases the risk of seeing rainfall in excess of 50, or even 100 mm. 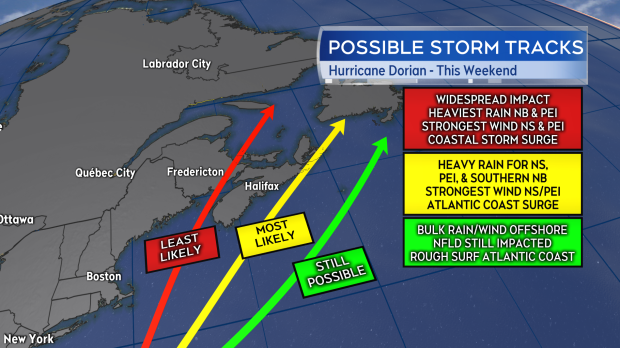 While the strongest of the winds with the storm would be offshore for the Maritimes, in this scenario, strong sustained winds and gusts would still be experienced. Probabilities of experiencing a period of tropical storm force winds (to and in excess of 63 km/h) are being given ranging from 50 per cent to 70 per cent for Nova Scotia, with the highest chances on the Atlantic coastline and for Cape Breton.

Tropical storm force winds would carry a risk of including higher winds gusts that could peak upwards of 80, 90, or even 100 km/h. Areas experiencing those types of winds would, of course, be at greater risk of power outages.

The combination of strong winds and increased sea level rise near the centre of the storm would bring the possibility of storm surge, or, at the very least, dangerously rough surf, to coastal areas with the storms passage. The risk at this time appears greatest for Atlantic coastal areas. 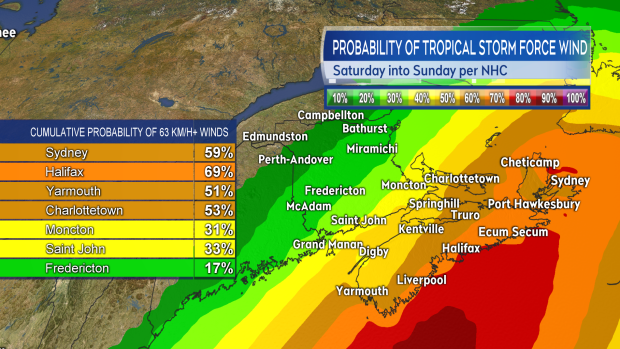 There is still significant uncertainty in the forecast for the storm this weekend. A shift westward would push heavier rain further into New Brunswick and bring stronger winds onshore to Nova Scotia. A more easterly move with the storm could hold the heaviest rain and strongest winds offshore of the Maritimes. While those details will see change over the coming days, an impact on the region is likely enough that the Canadian Hurricane Centre has issued a Tropical Cyclone Statement encompassing much of the Maritimes, as well as parts of Quebec, Newfoundland and Labrador. 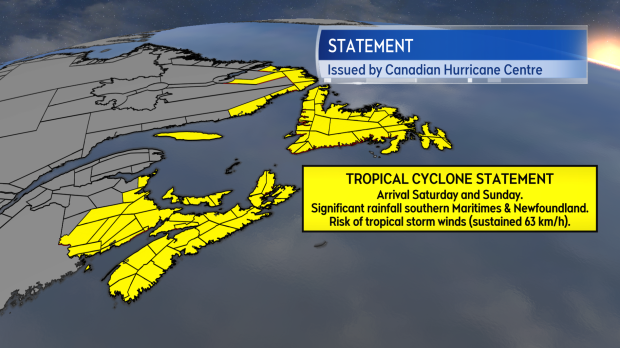 What can you do to prepare at this stage? Ensure that you are checking in on the forecast frequently throughout the remainder of this week. I’ll have the latest on the storm in posts to our website, social media, and during our television news programming.

Environment Canada and the National Hurricane Center both have websites with information on the storm updated frequently. Ensure that you are ready to go 72 hours without power. My own family ran a check at the start of this week just to make sure we have batteries and that we know where our emergency lights and kits are and that they are stocked.

If you need help preparing an emergency kit you can find information at www.getprepared.gc.ca. If you need to use your vehicle this weekend you may want to ensure the tank is topped up. Check the drainage on and around your property to ensure it is clear of any summer debris to reduce the risk of standing water. Be prepared to be flexible with your weekend plans dependent on weather conditions.