Hurricane Dorian is forecast to move into the southern marine waters of the Maritimes Saturday morning before nearing or coming onshore in eastern Nova Scotia Saturday evening.

The storm is expected to be a Category 1 hurricane, or a very strong post-tropical storm, as it passes through. In either case, extensive impacts due to heavy rain and strong winds are expected. 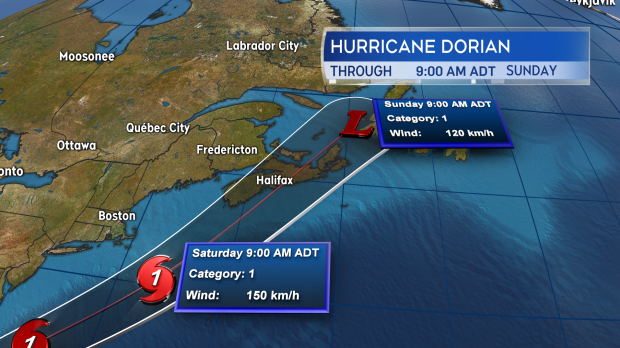 The highest rainfall totals are most likely for much of mainland Nova Scotia, Prince Edward Island, and southern New Brunswick. Due to the tropical moisture embedded in the storm, local amounts ranging from 80 mm to 160 mm for these areas are possible. The heaviest of the rain is expected Saturday afternoon through night. The heavy rain is then expected to clear eastern New Brunswick, Nova Scotia, and P.E.I. Sunday morning. A shift east or west with the storm could bring those higher rainfall amounts into other areas of the region.

Given the high amounts and downpours produced by the storm, flooding is a hazard. 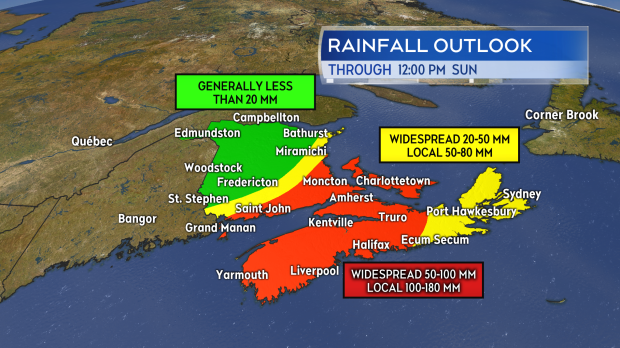 Winds that strong are likely to produce power outages. Due to summer foliage being present on trees, there is an increased risk of tree or branch falls compared to winter, when leaves are not present.

Winds are expected to increase in intensity through Saturday afternoon, peaking for most areas Saturday evening and night. Prince Edward Island and Cape Breton, Nova Scotia may continue to experience strong winds well into Sunday morning before they gradually diminish through the afternoon. 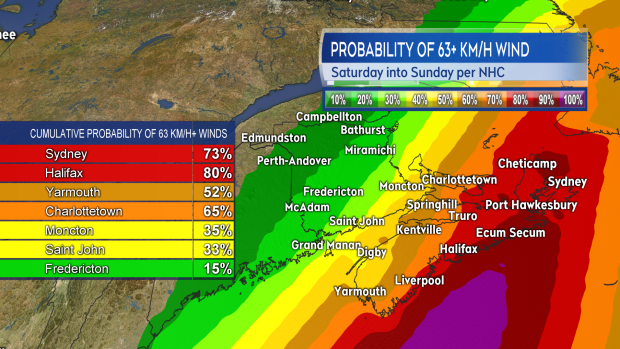 The Canadian Hurricane Centre expects that large waves and pounding surf will be produced in some coastal areas. Large waves may reach southwestern Nova Scotia Saturday morning, building into the Eastern Shore by Saturday night. North-facing coasts of the Gulf of St. Lawrence will also see dangerous surf develop Saturday night and Sunday morning. This would include Prince Edward Island and Cape Breton. 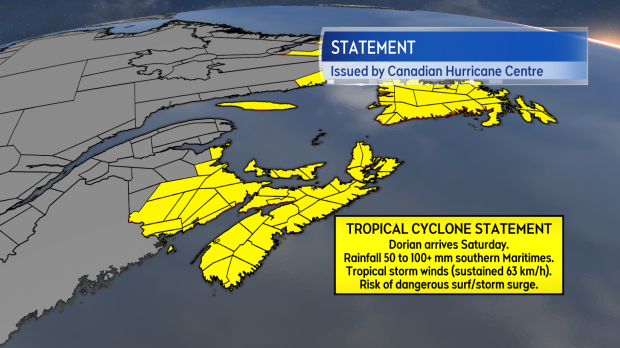 The weather is fair now and Friday. There is time to prepare. Be ready to go without power for 72 hours (recommended guideline), check the drainage on your property to ensure it is clear of debris, and make sure you have any items that you may need for the weekend to avoid travelling in adverse weather, or in the event the supplier of those items is closed due to a power outage. Heed the information given by officials regarding preparations and emergency plans for your area.

Continue to check in frequently on forecasts for the weekend. Environment Canada has authority on issuing weather-related warnings in Canada.

I will be providing updates through the week and weekend on the CTV Atlantic website and our television news programming. Further updates or links to updates via my social media sources on Facebook, Twitter, and Instagram.