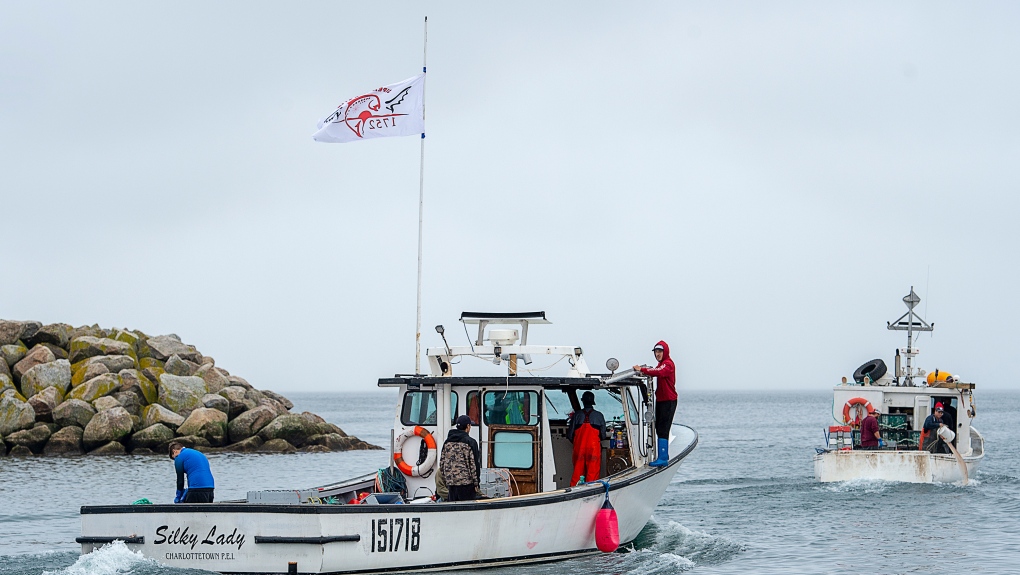 Indigenous lobster boats head from the harbour in Saulnierville, N.S. on Wednesday, Oct. 21, 2020. Tensions remain high over an Indigenous-led lobster fishery that has been the source of conflict with non-Indigenous fishermen. THE CANADIAN PRESS /Andrew Vaughan

HALIFAX -- The Indigenous moderate livelihood fishery in Nova Scotia has a new participant.

The Pictou Landing First Nation this week became the latest Mi'kmaq band to start fishing for lobster outside the federally regulated season.

Like the other bands involved in the new fishery, Pictou Landing is citing treaties from the 1700s that were affirmed in a landmark Supreme Court of Canada decision in 1999.

That ruling, known as the Marshall decision, confirmed that First Nations in the Maritimes and Quebec have a treaty right to fish, hunt and gather when and where they want as a means of pursuing a moderate livelihood.

The Pictou Landing First Nation has drafted a self-regulated fisheries management plan and it handed out fishing licences and trap tags on Wednesday.

The band's lobster fishing season in the Northumberland Strait opened Oct. 1 and will remain open until Dec. 14, even though the regular commercial lobster season doesn't reopen until the middle of next May. The band says it will also fish during the federally regulated season.

The management plan, which includes a long list of conservation and safety measures, does not indicate how many licences the band will issue but imposes a limit of 30 traps per fisher. Commercial fishing boats in the eastern section of the Northumberland Strait are allowed to use between 250 to 280 traps each.

The band's policy and protocol document refers to the fishery as the "Netukulimk livelihood fishery."

Netukulimk is defined as the use of natural resources for the "well-being of the individual and the community by achieving adequate standards of community nutrition and economic and spiritual well-being without jeopardizing the integrity, diversity or productivity of the natural bounty."

The band's fishing zone will be limited to two federally regulated Lobster Fishing Areas -- 26A and 26B -- which include the southeastern part of the Northumberland Strait and the entire west coast of Cape Breton.

The federal Department of Fisheries and Oceans has allocated 941 commercial lobster fishing licences for those two areas. That number includes 32 communal commercial licences for Indigenous bands, which are separate and distinct from the licences tied to the moderate livelihood fishery.

This report by The Canadian Press was first published Nov. 5, 2020.