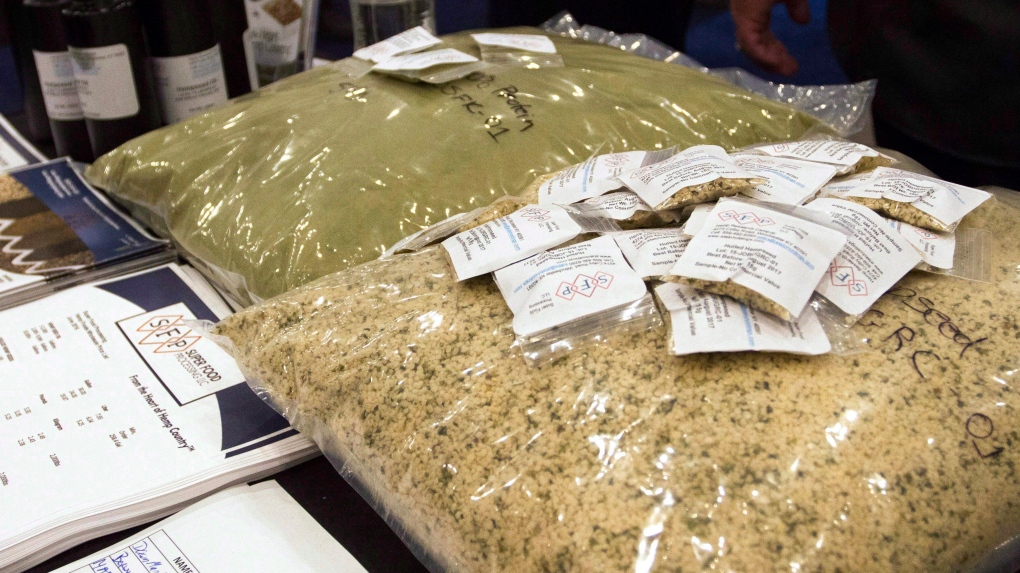 Bags of hemp seeds are displayed on a table next to promotional material at the Cannabis World Congress and Business Exposition, Friday, June 17, 2016 in New York. (THE CANADIAN PRESS/AP-Ezra Kaplan)

SAINT JOHN, N.B. -- Marijuana industry titans will gather in New Brunswick next week to discuss how to market cannabis in a competitive legal marketplace, and other issues raised by the dawn of government-run weed.

Topping their agenda is the branding challenge: Health Canada is requiring marijuana packages to be a single, uniform colour without images or graphics other than the logo and a health warning.

"We have to find creative ways to market our product and differentiate ourselves while remaining within the regulations," said Ray Gracewood, chief operating officer for Organigram, a Moncton, N.B., based medicinal cannabis producer that is ready to enter the recreational market.

Gracewood said the market needs to be able to develop brands when recreational cannabis becomes legal in Canada later this summer.

Organigram recently announced a number of brands, including Trailer Park Buds, through a partnership with the people responsible for the "Trailer Park Boys" television show. The firm's Moncton facility has expanded several times and now has more than 260 employees.

Gracewood said unless producers are able to be competitive within the regulations, people will be forced to look for loopholes.

"I don't think that is the intention, but there is a good chance that may become the end result."

Simmons, who maintains that he has never smoked cannabis in his life, said he is "bullish" on Invictus. He has purchased $10 million in stock in the company.

The Tragically Hip, meantime, are a creative partner and shareholder in Newstrike Resources Ltd., an Ontario marijuana producer.

Derek Riedle, publisher of cannabis culture magazine "Civilized" and co-chair of the conference, said the invitation-only event is an opportunity to draw on the experience of other jurisdictions around the world.

"A brand is something we can talk about here in Canada but there are remarkable differences between the way Canadian and American companies need to behave in those marketplaces. It is not just within the Canadian context," he said.

The conference agenda includes other items such as impaired driving and the unanticipated impacts of legalization.

Riedle said they will also explore the lessons learned in different jurisdictions in the United States and elsewhere around the world, but he said all eyes are on Canada.

"Because Canada is moving towards a legal recreational market first and before the vast majority of other jurisdictions around the world, we really are viewed as global leaders. The rest of the world is interested in what's going on here in Canada," he said.

But Riedle stresses there are many lessons to be learned and Canada is still very early in the game.