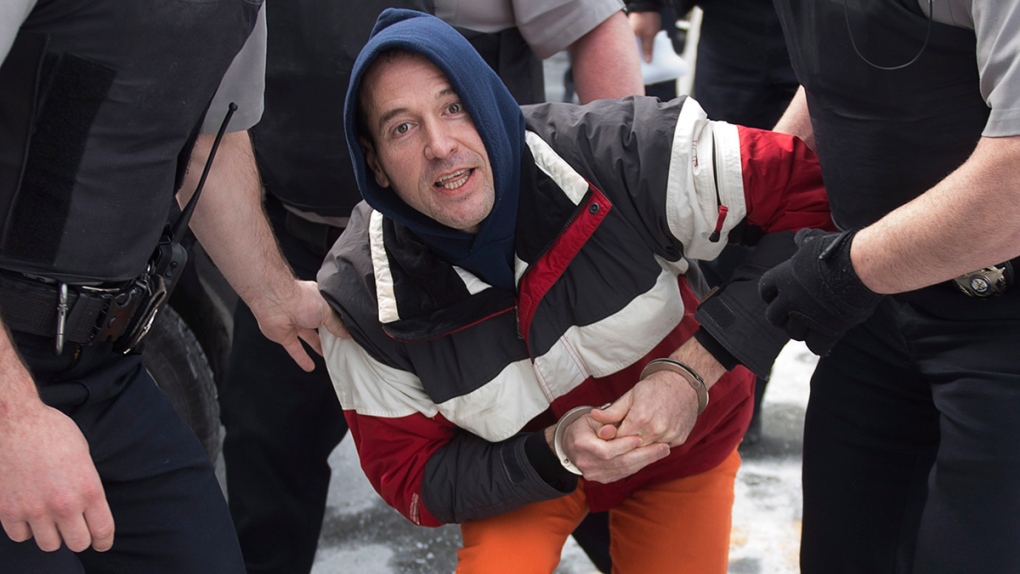 Christopher Phillips, accused of threatening police with a dangerous chemical, arrives for his bail hearing at provincial court in Dartmouth, N.S. on Tuesday, March 17, 2015. (Andrew Vaughan / THE CANADIAN PRESS)

HALIFAX -- A Halifax man accused of threatening police with a dangerous chemical had his application for bail rejected Tuesday after a judge ruled that his estranged wife can't ensure he will comply with conditions.

Judge Alanna Murphy rejected a bail application by Christopher Phillips, saying his wife Gosia is not an acceptable choice to be his surety.

"The guarantor is responsible for ensuring the accused complies with all conditions of release and ... is the eyes and ears of the court and is managing any risk," Murphy told provincial court.

"I would want to see a surety who had the ability to appropriately and effectively manage this role and Gosia Phillips is not such a person in this instance."

Gosia Phillips told the court last Friday she was offering to put up $10,000 bail in order to have her husband released from custody.

She testified that even though they are separated and she has a legal agreement prohibiting him from entering her home, she was willing to act as his guarantor.

Murphy said she would still consider granting bail to Christopher Phillips, 42, if there were a different release plan and set of conditions in place.

Defence lawyer Mike Taylor said outside court he couldn't find anyone besides Gosia Phillips who could be his client's surety.

"I'll continue to try, but I have no idea how likely it is," he said.

Christopher Phillips was arrested Jan. 21 at an Ottawa hotel and brought back to Halifax to face charges of uttering threats and possession of a weapon for a dangerous purpose.

Police allege they found chemicals at a cottage and shed in the Halifax area that were in various states of degradation. The discovery prompted evacuations in Halifax and the Ottawa hotel where Phillips was arrested.

At his bail hearing last Friday, RCMP Sgt. Lisa Stuart said their investigation began when Gosia Phillips came to them on Jan. 19 and told them her husband's mental health was deteriorating and he was behaving strangely.

Christopher Phillips also testified at his bail hearing, saying he used the chemicals to extract precious metals and that he was operating a chemicals business at the time.

Defence lawyers routinely ask for publication bans on bail hearings, which judges must grant upon their request. But in Phillips' case, Taylor told the judge he did not want such a ban.

Outside court Tuesday, Taylor said an email Phillips sent to a friend in the United States that is the basis of the uttering threats charge is not enough to prove a threat was made against police.

"There's sarcastic, flippant things said in the email that fly in the face of any suggestion this was any kind of serious threat," Taylor said.

"He stated specifically he wasn't making a threat, he wouldn't do anything illegal and he doesn't wish harm to anyone."

Taylor told the judge that Phillips wants to waive his preliminary hearing and go straight to trial on May 26 in Dartmouth provincial court.

Murphy said moving the trial from Supreme Court to provincial court may require the Crown's consent and she set a hearing on that matter for March 25.