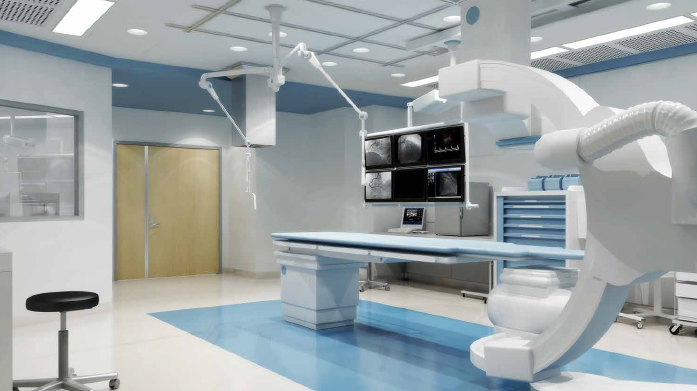 An architectural mock-up of the new lab. (Source: Government of Nova Scotia)

A lab for a heart procedure currently only available in Halifax will be part of a new expansion at the Cape Breton Regional Hospital in Sydney, N.S., said Nova Scotia’s health and wellness minister Friday.

The province says a cardiac catheterization lab will be built in a new clinical services building that is part of the Cape Breton Regional Municipality Health Care Redevelopment project.

In cardiac catheterizations, a thin, flexible tube is guided through a blood vessel to the heart to diagnose or treat conditions like clogged arteries and to prevent heart attacks.

Dr. Paul MacDonald, chief of cardiology in Nova Scotia Health’s Eastern Zone, says the lab is the biggest health care initiative announced for Cape Breton since the opening of a cancer centre in 1998.

“It will improve patient outcomes, reduce wait times for cardiac services and free up hospital beds in Cape Breton and across the province. This is a major step forward for health care in Cape Breton and for all Nova Scotians,” said MacDonald in a news release.

According to the province, cardiovascular disease is one of the leading causes of illness and death in Cape Breton.

Of the Cape Bretoners who require cardiac catheterization each year, the province says 300 are transported to Halifax by emergency air or ground ambulance.

"This cardiac cath lab will provide life-saving care in Cape Breton, and also make life so much easier for patients, who will be able to have their procedure done in less time than it takes them to get to the causeway," said Health and Wellness Minister Michelle Thompson, in the release.

The province says construction on the clinical services building is expected to start in 2023.

Canada's single-use plastics ban starts this month with their manufacture and import: These are the products on the list

Canada's ban on single-use plastics, starting with the manufacture and import for sale of a number of products, comes into effect later this month.

The federal government has approved a change in how the cannabis content of beverages is calculated, pushing the number of standard-sized, canned pot drinks that can be bought at once from five to 48.

Oldest known pair of jeans in the world pulled from shipwreck, sold at auction

Pulled from a sunken trunk at an 1857 shipwreck off the coast of North Carolina, work pants that auction officials describe as the oldest known pair of jeans in the world have sold for US$114,000.

Here's what Gen Z wants in 2023, according to Instagram

Instagram has published a new report highlighting the top rising trends for the coming year among Gen Z users across the platform.

'I will not be resigning': Winnipeg police chief supportive of determining if landfill search is possible

Amid calls for his resignation, Winnipeg's police chief says he will not be stepping down and is committed to getting justice for the four victims of an alleged serial killer.

The men’s World Cup quarterfinal stage kicked off on Friday as Croatia eliminated Brazil and Argentina beat the Netherlands. CTVNews.ca has all the latest from the tournament.

France to make condoms free for anyone under 25, Macron says

France will make condoms free in pharmacies for anyone up to age 25 in the new year, President Emmanuel Macron announced Friday.