‘Make it OK to not be OK’: The Friendship Bench provides safe space at N.B. school 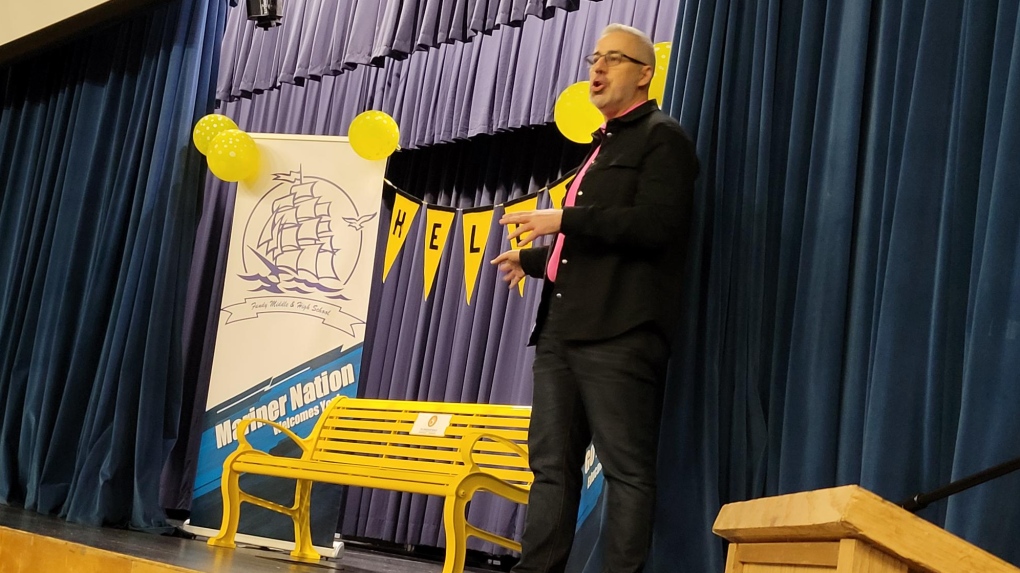 Fundy Middle and High School in New Brunswick has become the first in the province to adopt “The Friendship Bench” initiative.

The bright yellow bench was donated by the initiative’s co-founder Sam Fiorella, whose son Lucas died from suicide in 2014, after suffering in silence.

“By encouraging kids to say ‘hello’ to each other and to make it OK to not be OK, we’ve seen a 20 per cent increase in the number of kids asking for help after we’ve put this program into a school,” said Fiorella.

With suicide as the second leading cause of death for Canadians aged 15 to 34, the bench initiative seeks to reduce the statistic by serving as a visual reminder for students to sit, take a minute, and talk openly and honestly about their mental health.

“Yellow is for hello, it’s a yellow bench,” said student Elise Cheney. “Something as simple as saying ‘hello’ can make such a big difference. It’s really just there as, like, a permanent reminder and a call out to action kind of idea.”

More than 60 benches have been installed across 50 Canadian schools in seven provinces.

Besides encouraging conversation, The Friendship Bench aims to educate students about the causes of mental illness, and connect them to on-campus and in-community supports.

Each bench has a plaque directing students to the initiative’s website, which provides links to mental health support services.

The bench at Fundy Middle and High School is a legacy project from the school’s graduating class.

Hundreds of homes have been inundated in and around Australia's largest city in a flood emergency that was causing trouble for 50,000 people, officials said Tuesday.