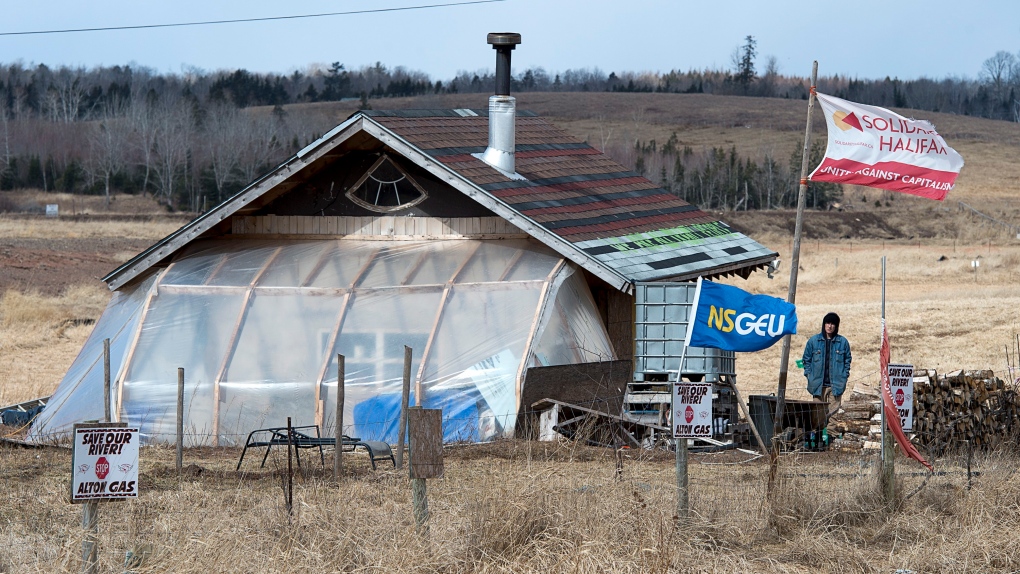 An unidentified man stands at a Mi'kmaq camp at the entrance to an Alton Gas work site along the Shubenacadie River, in Fort Ellis, N.S. on Monday, March 18, 2019. (THE CANADIAN PRESS/Andrew Vaughan)

HALIFAX -- A court order has laid out a small patch of fenced land where Aboriginal and other protesters will be required to remain as they oppose a plan to store natural gas in underground caverns north of Halifax.

The designated area of grassy field, about 22 metres by 38 metres, is part of a Nova Scotia Supreme Court order that details how a temporary injunction against protesters on the Alton Gas property will be applied.

But opponents dismissed the official "protest site" as a "play pen" in comments on the "Stop Alton Gas" Facebook site.

Michelle Paul posted on Twitter, "There is no cage big enough to contain our treaty spirit."

A spokeswoman for Alton confirmed that fencing was being erected at the Fort Ellis, N.S., site, and that signs were being posted.

The court document released by the company Monday -- which includes an aerial view of the protest site -- comes in the wake of the injunction ordered on March 18 by Justice Gerald Moir of the Nova Scotia Supreme Court.

The court order dated March 27 says the RCMP may arrest any person who violates the order.

It also says the protesters must conduct their protest peacefully, only during daylight hours and that they not set up "any inhabitation" at the site.

It prohibits people from interfering by force, threats or coercion with Alton Gas and utility workers seeking entrance to the site at 625 Riverside Road for the "purpose of investigating a recent power outage, and assessing and repairing property damage arising therefrom, and for all other operational and security purposes."

For the past 12 years, Alton Gas has been planning to pump water from the Shubenacadie River to an underground site 12 kilometres away, where it will be used to flush out salt deposits, and create up to 15 caverns.

The leftover brine solution would then be pumped back into the river over a two- to three-year period.

Protesters have gathered at the site for several years, arguing that the plan poses dangers to the traditional fisheries of the Mi'kmaq and risks harming the river used by Aboriginal populations for thousands of years.

The protest had included a makeshift structure that blocked the main access road to the company's pumphouse and control centre near the Shubenacadie River.

When Moir granted the temporary injunction to end the actions by Dale Poulette, Rachael Greenland-Smith and others, he said the company must set up another area where "protesters" could gather and be seen by the public.

The new site is an area visible from the main road, but is about 25 to 30 metres from the entrance to the Alton work site where the current protest camp is located.

"The decision by the court means people trespassing, including those named in the injunction and others having notice of the order, must leave or go to the protest area. Moving forward, access to the work site is open only to approved Alton staff and contractors," says an Alton Gas news release.

"We are setting up a separate area for peaceful protest that will be clearly marked."

The order released Monday says that under the terms negotiated and signed by the lawyers for Poulette and Greenland-Smith and the Alberta-based firm, any person arrested may be released provided the person agrees to abide by the court order, but can also be kept in custody.

However, the document says that the respondents can apply to the courts to vary the order, after giving 72 hours notice.

The Ecojustice lawyer for Poulette and Greenland-Smith who signed the document says he is no longer representing them, and their new lawyer was not available for comment.

Last week, Prime Minister Justin Trudeau was met by protesters of the Alton Gas project during his visit to Halifax, and he said Ottawa will consider their grievances.

Trudeau said Ottawa would work with local communities, Mi'kmaq chiefs and the province "to move forward on regulations in a way that addresses your concerns."

The federal government said last month that it will step in to regulate the company's plan in a way that would manage potential threats to fish, fish habitat and human health.