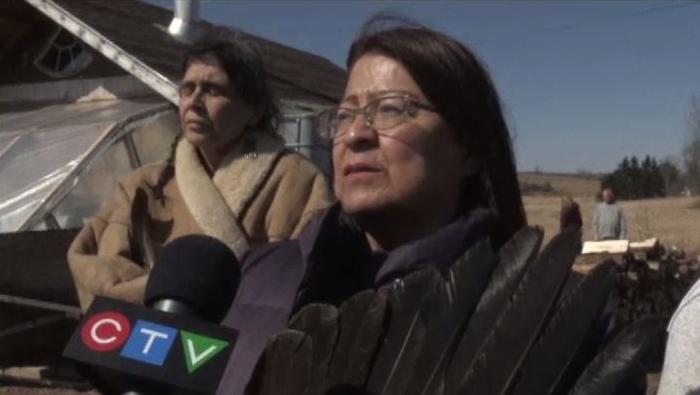 “We have to pick our fights,” said Doreen Bernard. “Right now, it's to make sure that they never put anything into this river.

Water protectors and supporters are leaving a location on the Alton Gas property to honour a Nova Scotia court order this week.

They've been removing important ceremonial items, medicines and other articles from an encampment in the area, but the protestors say they're still concerned about how the plan to pump millions of litres of water into underground wells will affect the Shubenacadie River.

“We have to pick our fights,” said Doreen Bernard. “Right now, it's to make sure that they never put anything into this river. They're nowhere doing that right now, so do we have to be here in this space?”

With the injunction the protestors will have another site designated for them to stay.

Alton Gas is planning to store natural gas in huge underground caverns north of Halifax -- a project that prompted protesters to occupy a two-storey hut at one of its facilities near the Shubenacadie River.

Lori MacLean, a spokeswoman for the firm, said it was expected the remaining protesters would move their belongings away from the site by 5 p.m. Thursday.

She said this is an "informal agreement" by the lawyers for two protesters -- Dale Poulette and his partner Rachael Greenland-Smith -- and the company on the meaning of a temporary injunction against the occupation of the site.

However, MacLean said the company "isn't planning on any immediate return to the river" before the injunction's final wording is finished.

Earlier this week, a Nova Scotia Supreme Court judge ruled that Poulette, Greenland-Smith and others must stop occupying the makeshift structure that blocks the main access road to the company's pumphouse and control centre.