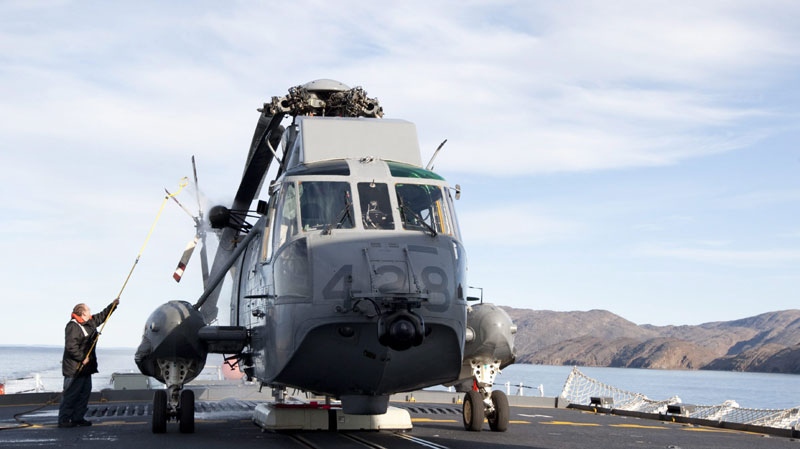 OTTAWA -- The Harper government may be ready to throw in the towel on the purchase of long-delayed CH-148 Cyclone helicopters and has gone as far as sending a military team to Britain to evaluate other aircraft.

Defence sources say the team, which included an officer from the air force directorate of air requirements branch, visited a southern base in the United Kingdom recently to look at Royal Navy HM-1 Merlin helicopters.

A spokeswoman for Public Works Minister Diane Findley confirmed the government is looking at options "other" than the troubled Cyclones, which are years behind schedule and billions of dollars over-budget.

But Amber Irwin would not get into the details.

"We are conducting an analysis of price and availability of other aircrafts manufactured by other vendors," Irwin said Thursday. "The Government of Canada is committed to ensuring that our armed forces have the equipment they need at the best value to the taxpayer."

But sources inside National Defence said the effort is "quite serious" and more than just a warning to Sikorsky, the maker the Cyclones, which has been publicly pressuring the Conservative government to accept four test helicopters currently at Canadian Forces Base Shearwater, N.S.

It is under contract to deliver a total of 28 aircraft.

The U.S. defence giant wanted to gradually introduce the helicopters into service with scheduled upgrades to the flight software until the aircraft was fully capable of handling all its missions -- a proposal the government has steadfastedly rejected.

A spokesman for AugustaWestland, the maker of the Merlin, said the company has watched the unfolding procurement drama and already conducted its own analysis of whether it can meet the Canadian air force's statement of requirements.

"We have not been asked for inputs," Jeremy Tracy told The Canadian Press, "but what we have ascertained is that the company is quite happy that we are probably more compliant today than we were at the time of bidding."

AugustaWestland was a contender a decade ago in the bidding, which ultimately saw Sikorsky picked as the winner.

The Merlin helicopter, which was examined by the team, is a variant of the CH-149 Coromrant, which Canada already flies for search-and-rescue, and both of those aircraft are based on AugustaWestland's original EH-101 design.

If the Conservatives were to scrap the Cyclone in favour of the Merlin it would be a decision steeped in irony.

In the early 1990s, Brian Mulroney's government ordered 50 EH-101s to replace the air force's CH-124 Sea Kings, which are still in service. But the deal was cancelled by Jean Chretien's Liberals shortly after they were elected in 1993.

It was Paul Martin's Liberal government which signed the deal Cyclone deal with Sikorsky for $3.2 billion -- a figure which has now ballooned to $5.7 billion. The aircraft were supposed to be in service by 2008.

The failure to deliver new aircraft was the subject of a scathing auditor general's report.

So far, Sikorsky has accrued $88.6 million in liquidated damages for its failure to meet the contract.

Last spring, former public works minister Rona Ambrose asked for an independent analysis of whether Sikorsky could deliver what it promised and Irwin says the government is currently studying a draft version of that report.

Government insiders say it was an attempt to deliver better governance over the program, which has been regular fodder for opposition parties in question period.