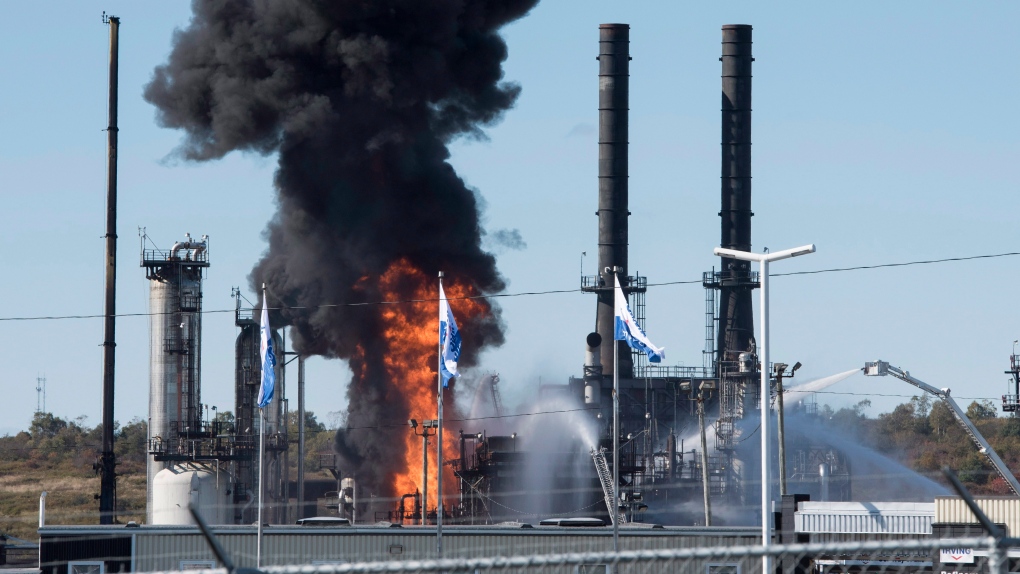 Flame and smoke erupts from the Irving Oil refinery in Saint John, N.B., on Monday, September 8, 2018. (THE CANADIAN PRESS/Stephen MacGillivray)

SAINT JOHN, N.B. -- It's been a tough month for one of Canada's wealthiest families.

The Irvings of New Brunswick are facing renewed scrutiny after a major industrial accident at the Irving Oil refinery in Saint John -- one month ago Thursday -- and three guilty pleas the following day from Irving Pulp and Paper for polluting the Saint John River.

The sudden spate of bad publicity has drawn into sharp focus the delicate relationship between the Irving group of companies and the 69,000 residents of Saint John.

The Irvings are one of the city's largest employers, and the family's privately owned companies are thought to be worth about $8 billion.

No one was seriously hurt by the refinery blast, but residents were reminded that it was the fourth explosion at Canada's largest oil refinery in 20 years.

As for the pulp and paper mill, owned by J.D. Irving Ltd., it was hit this week with one of largest penalties ever imposed in Canada for an environmental violation: $3.5 million. Fines for charges related to polluting were imposed on the same mill in 1999, 2009 and 2010.

The city's mayor, Don Darling, has said Saint John's large industrial base comes with risks, and he has called for a broader discussion about the relationship between residents and industry.

He also drew attention to another incident in January, when a butane leak near the refinery forced the evacuation of businesses on at least two streets.

"We have a very, very high concentration of industry here in Saint John and I think we've gone through a series of butane leaks and explosions and fires, and I think it has people very nervous and rightly so," Darling said shortly after the latest explosion.

Irving Oil spokeswoman Candice MacLean said the company, which employs more than 2,200 people in the province, is a "safe, secure and reliable energy supplier."

"We are steadfastly committed to our employees and our customers and continue to invest millions of dollars each year to build stronger communities in our home province and across Atlantic Canada," MacLean said in a statement, adding that the company generates over 50 per cent of New Brunswick's export trade at $5 billion annually.

Gordon Dalzell, a clean-air advocate in Saint John, said the Irving group plays a critically important role in the New Brunswick economy, but its economic might exacts a toll on the province.

"In a small city like Saint John, you quickly find out that many of your neighbours and their family members work for Irving," he said in a recent interview. "Very few people will speak out ... to keep them accountable or to criticize some of their practices."

Dalzell estimates the Irvings employ about 35,000 people across the province.

"You can't go too hard on these guys because they play such an important economic role," said Dalzell, who has lived near the refinery since 1979. "But we do pay a price for that ... When you look at Saint John, it's like a big industrial park."

Gerry Lowe, a former city councillor who now represents Saint John Harbour in the provincial legislature for the Liberals, says dealing with the Irving family can be intimidating -- but that hasn't stopped him from speaking out.

"People don't know what is going on because they are a very private family," said Lowe. "It creates so many rumours."

As privately owned companies, the Irvings' holdings are not subject to the same scrutiny as publicly held enterprises. In fact, estimates about the family's combined wealth are just guesses, based on a limited amount of public information.

When he was on council, Lowe fought against a tax deal aimed that capped the property tax on Irving Oil's Canaport liquefied natural gas plant.

"People were saying, 'You shouldn't do that, (Arthur Irving) will move the LNG terminal." Lowe said. "That's the first thing you'll hear from people who are timid."

Emma Seamone, spokeswoman for the Sierra Club Canada Foundation, said there isn't enough scrutiny of the Irvings' businesses because the family owns all of the English-language daily newspapers in the province.

"It's really hard to question Irving in the media and get that message out," said Seamone, chairwoman of the Atlantic chapter's executive committee and a former resident of Saint John.

However, the Irving newspapers are not the only media outlets in the province. The CBC, for example, has kept a close watch on the Irvings' dealings over the years.

And the newspaper group, owned by J.K. Irving, has made a point of asserting its editorial independence over the years.

"Brunswick News is run by a competent, independent team that determines content," said spokeswoman Mary Keith. "Its journalists have won numerous awards for the quality reporting."

The Irving group of companies used to be controlled by the family's patriarch, K.C. Irving. But the conglomerate has been split up over the last decade between his three sons: Arthur, J.K. and Jack, who died in 2010.

David Duplisea, spokesman for the Saint John Region Chamber of Commerce, declined a request for an interview.

"Both of these companies (J.D. Irving Ltd and Irving Oil Ltd.) are extremely important to our region and our province," he said in an email. "They are important for our economic well-being and they contribute immensely to philanthropic and community efforts as well."

Just over a year ago, Irving Oil was dealt a blow when Calgary-based TransCanada Corp. cancelled its $15.7-billion proposed Energy East pipeline, which would have carried Alberta crude to the Saint John refinery. A local business group estimated the project would have added thousands of jobs and $6.5 billion to the provincial economy.

Darling has said his once-affluent city -- the oldest incorporated city in Canada -- was looking to Energy East as a source of momentum to get the local economy moving again.

Despite the setback, Irving Oil remains a pivotal player in the province's economy -- a fact likely not lost on the province's next premier, Blaine Higgs. The Progressive Conservative leader, who will be sworn in on Friday, worked for Irving Oil for 33 years before he retired and turned to politics.

Mediacorp Canada Inc., the largest publisher of employment periodicals in Canada, selected Irving Oil as one of Canada's Top 100 Employers this year, citing its maternity and parental leave top-ups, academic scholarships and its commitment to diversity and inclusion.

The company also supports a number of charities, including the Fuel the Care program, which covers fuel-related travel expenses for a sick child's medical treatment. The program has helped more than 50,000 families across Atlantic Canada, Quebec, and New England in the past 15 years.

Keith, who is a spokeswoman for J.D. Irving Ltd., offered a lengthy emailed response when asked about the renewed focus on the Irvings.

Regarding the company's economic strength, Keith cited 2017 statistics indicating the 8,000 people who work for J.D. Irving Ltd. earn salaries that are, on average, 45 per cent higher than the provincial average for full-time workers.

The company estimates that it indirectly supports another 9,000 jobs across the province, bringing its contribution to the economy to about $1 billion in employment income in 2017.

She said the company is also known for supporting hundreds of events, scholarships and non-profit organizations.

As well, she said J.D. Irving Ltd. has a well-earned reputation for stepping up to help when disaster strikes.

Earlier this year, when the Saint John River flooded several communities, more than 150 JDI employees volunteered to fill more than 122,000 sand bags. The company helped keep the pharmacy in Chipman, N.B., open by airlifting in the pharmacist, and when the only way in or out of a west side community was by train, the company sent in an engine and passenger cars to help with evacuations.