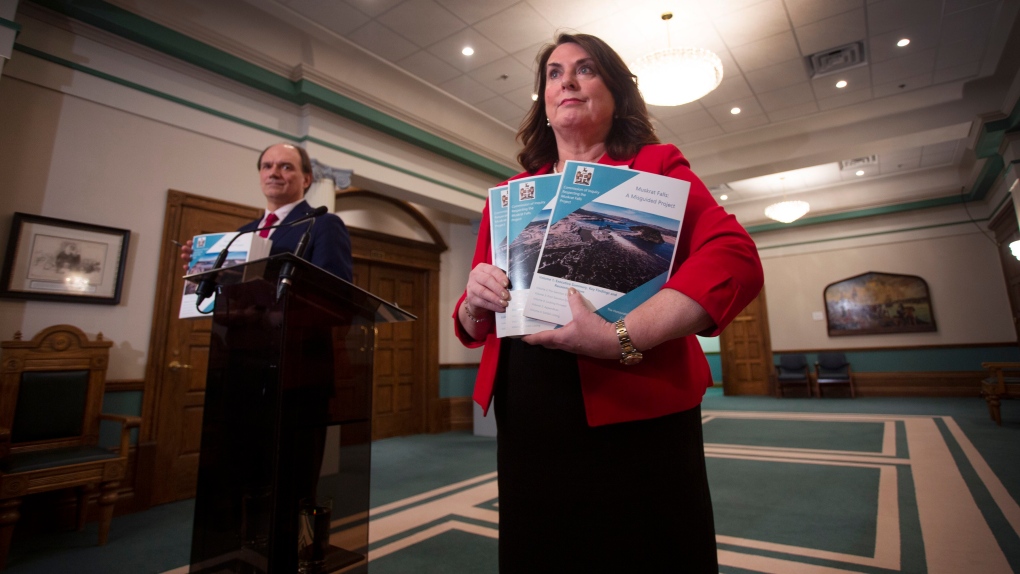 Newfoundland and Labrador Natural Resource Minister Siobhan Coady and Peter Ralph, lawyer for the provincial department of justice and public safety, hold a press conference on Thursday, February 5, 2020 at the House of Assembly. (THE CANADIAN PRESS/Paul Daly)

ST. JOHN'S, N.L. -- The commissioner leading an inquiry into the troubled Muskrat Falls hydroelectric project says past provincial governments failed to protect the residents of Newfoundland and Labrador.

In a scathing report made public Tuesday, provincial Supreme Court Justice Richard LeBlanc concluded the government failed its duty to residents by predetermining that the megaproject would proceed no matter what.

"In acting as it did, (the provincial government) failed in its duty to ensure the best interests of the province's residents were safeguarded," LeBlanc wrote.

He wrote that politicians also failed residents by placing "blind trust" in executives of Nalcor, the Crown corporation overseeing the hydro dam, who then "exploited this trust by frequently concealing information about the project's costs, schedule and risks."

Ball said the report will now be referred to police and the provincial justice department.

The inquiry led by LeBlanc ran hearings from fall 2018 through last summer looking into cost and schedule overruns of the $12.7-billion dam on Labrador's Lower Churchill River.

The report was presented to the provincial government last Thursday and reviewed by government lawyers before its public release.

The 824 megawatt hydroelectric dam will eventually send power to Newfoundland and later Nova Scotia through subsea cables. The megaproject's costs have essentially doubled since it was sanctioned in 2012 under a previous Progressive Conservative government.

It now accounts for about a third of the Newfoundland and Labrador's considerable debt and has been referred to as a "boondoggle" by Nalcor's current CEO, and the province's "biggest fiscal mistake" by its current premier.

It's set to produce more power than the province needs and its financial structure, which Ottawa has agreed to reconfigure, would leave electricity ratepayers to pay for the extra costs through their monthly bills.

In his report, LeBlanc concluded that the business case, which assumed the Muskrat Falls project was the lowest-cost power option for residents, was "questionable." He wrote that the project's economics were not sufficiently tested and that Nalcor failed to consider all potentially viable power options.

LeBlanc laid significant blame at the feet of former Nalcor CEO Ed Martin, naming him and other executives as taking "unprincipled steps to help secure project sanction," including concealing information that could undermine the business case to the public and government.

These actions included "deliberately" not obtaining a risk report prepared by consulting firm SNC-Lavalin in 2013 which added a possible $2.4 billion to Nalcor's risk calculations, though LeBlanc wrote "it is clear that Nalcor knew of its existence."

LeBlanc wrote that Martin fostered a culture of superiority within the project's inexperienced senior management team, which regularly ignored the advice of more knowledgeable individuals, and that executives took advantage of government officials' lack of knowledge about hydro projects.

He also wrote that government and Nalcor officials failed to research well-known risks related to megaproject cost and schedule runs, writing that "their failure to do this is indefensible."

LeBlanc also determined that the government "did not act appropriately" or fairly with Indigenous people regarding environmental and health concerns related to the project, saying government and Nalcor's actions created "an environment of mistrust" that led to protests, unrest and further delays.

"Even today, (the government) has failed to ensure that its commitments, and those of Nalcor, regarding environmental matters related to the project are being properly tracked, monitored and acted upon," LeBlanc wrote.

He also critiqued the government for commissioning a report by Manitoba Hydro International that was "plainly and obviously improperly influenced and biased in favour of the project." He called the report and the government's involvement in restricting its scope a missed opportunity for comprehensive analysis ahead of sanctioning the project.

LeBlanc made 17 recommendations that included limiting the powers of Nalcor related to withholding information from government on legal or commercial grounds.

He also recommended the government should not undertake any project with a budget larger than $50 million without engaging with independent experts and providing "well-defined" oversight.

Other recommendations involved taking steps to ensure civil servants "are empowered to speak truth to politicians" and enacting "duty to document" legislation applying to government, Crown corporations and agencies within six months.