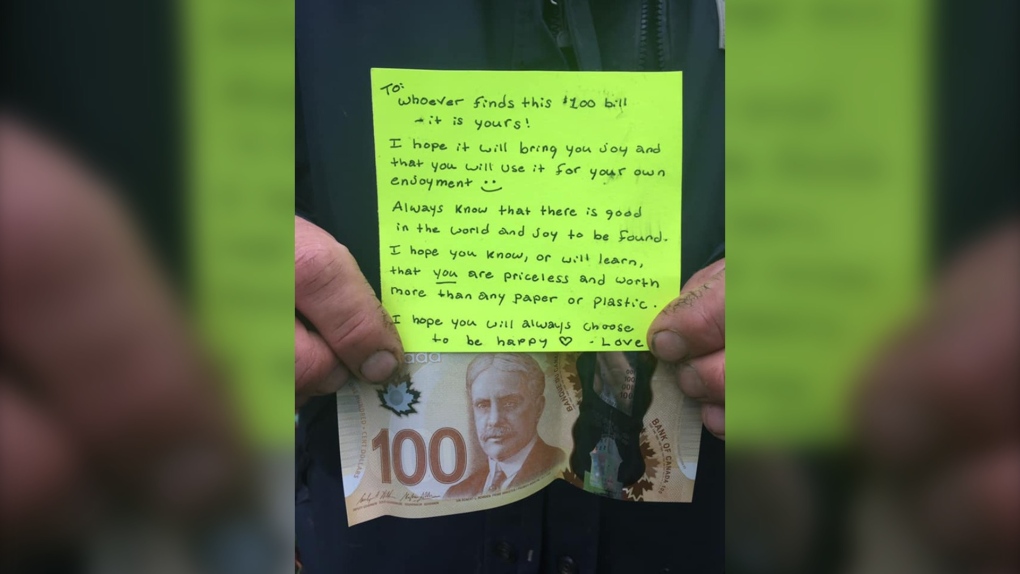 A person holds a $100 dollar bill and a note in this undated handout photo. The treasure was found by New Glasgow town employee Doug Miller while setting up for a funding announcement over the weekend. (THE CANADIAN PRESS/HO, Geralyn MacDonald)

NEW GLASGOW, N.S. -- An anonymous benefactor who secretly placed a $100 bill and an unabashed message of positivity in a Nova Scotia park has delighted and intrigued the town's residents.

The bill was taped to a New Glasgow, N.S., gazebo in a Ziploc bag with a note encouraging the finder to spend the money on something that brings them happiness.

"Always know that there is good in the world and joy to be found," the note read. "I hope you know, or will learn, that you are priceless and worth more than any paper or plastic."

The message was found by town employee Doug Miller while setting up for a funding announcement over the weekend, and the positive story has travelled fast.

Miller said people have come up to him on the street to talk about the mystery note and congratulate him on the lucky find that he at first thought might have been a prank.

"It's a little on the surreal side ... it's like something out of Hollywood," Miller said by phone on Monday.

The town employee and first responder said he's still considering what to do with the money but he hopes to pay it forward to someone else.

For Miller, the thought, effort and intention behind the big-hearted gesture were the most impactful parts of his discovery, and the thoughtful conversations with other residents that have followed.

"It's the intention that I'm really trying to absorb," he said. "Talking to people about it and the message behind it, I think it's fabulous."

Miller said he was touched by the kind message along with the sum that could make a difference in someone's life who may be struggling to put food on the table or pay bills.

Geralyn MacDonald, the town's director of community development, arrived at Carmichael Park shortly after Miller found the money and shared the heartwarming story on Facebook.

MacDonald said the random act of kindness has been the talk of the town, with nearly 1,000 comments and hundreds of shares commenting on the great community.

"We've got a lot of great people here and somebody just proved it on Saturday, that somebody would do something so amazing and so awesome," MacDonald said.

"I think they set out to make a positive impact on one person's life but they actually did for the whole community."

Sean Fraser, MP for Central Nova, shared the story on his Facebook page, noting he was with Miller after he discovered the money and applauding the "terrific gesture, and a terrific guy!"

As the community celebrates the generous act, the identity of the person behind the message is still a mystery. Miller said some people have even tried to analyze the handwriting for a clue to the author's identity.

Given how far the story has spread in the close-knit community, MacDonald said she doubts the person will come forward, making their actions even more touching.

"Whoever did this, did this and doesn't want the recognition," she said. "I'm sure whoever did this knows by now the impact this has made, and how much we would like to thank that person."