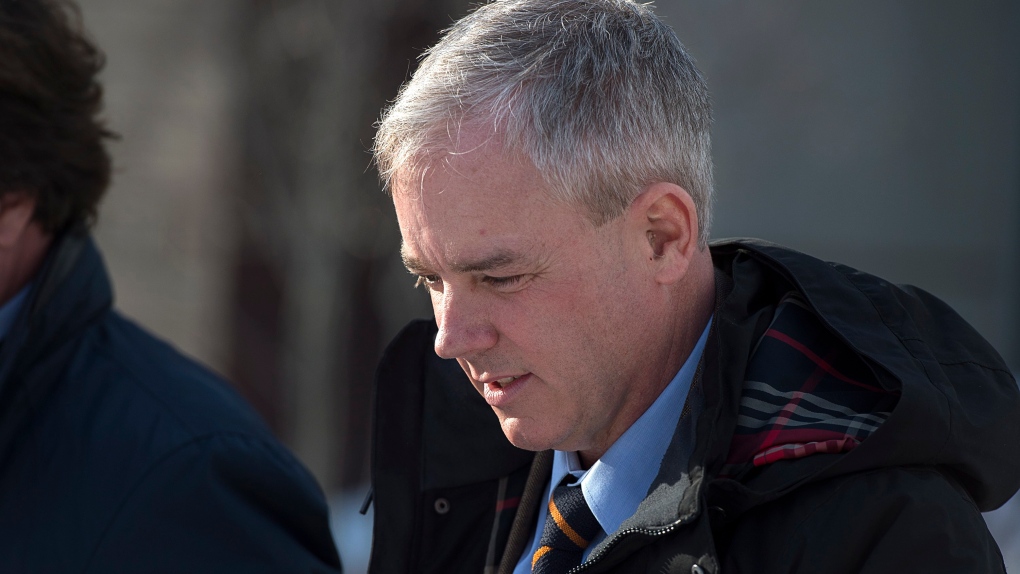 Dennis Oland heads from the Law Courts after the start of his testimony in Saint John, N.B., on Wednesday, March 6, 2019. (THE CANADIAN PRESS/Andrew Vaughan)

SAINT JOHN, N.B. -- Just over eight years after multi-millionaire Richard Oland was bludgeoned to death in his Saint John office, his only son, Dennis, is about to find out whether he will be judged guilty or not guilty of the grisly crime.

Justice Terrence Morrison of the New Brunswick Court of Queen's Bench will deliver his verdict Friday morning in the second degree murder trial of Dennis Oland, 51, who is charged with beating his father to death on July 6, 2011.

It is the second time Oland has waited for a verdict in the sensational case. Oland, a former financial adviser, was charged with killing his father in 2013 and was convicted by a jury in 2015. That verdict was set aside on appeal in 2016 due to an error in the judge's charge to the jury, and the new trial was ordered.

Now, after 44 days of hearings spanning four months, with testimony from 61 witnesses and more than 300 exhibits filed, Oland is about to learn his fate. Saint John police suspected him of the crime from the very beginning, but he has always insisted he had nothing to do with his father's death.

The last time the verdict was read, Oland collapsed, howling in anguish after the jury declared him guilty. There is no jury this time. Due to problems with jury selection last year, the Oland retrial was held before judge alone.

The Oland murder case is a family tragedy that has gripped the public from the start. Richard Oland was 69 when his battered and bloody body was discovered on July 7, 2011. He was a prominent businessman in Saint John, worth an estimated $36 million at the time of his death.

The Oland family is well known in the Maritimes where its members have been involved in beer-making for generations. The victim was a former vice president of Moosehead Breweries, the oldest, family-owned brewery in Canada.

Richard Oland left Moosehead in the early 1980s following a succession dispute but established himself in other enterprises ranging from real estate to trucking. He was killed in the offices of his investment firm, the Far End Corp., located in the heart of the old port city.

The trial was told Oland was struck more than 40 times, mostly on the head, with a weapon, or weapons, that had both sharp and blunt edges. He was hit with such force, his skull shattered in several places. Blood from the attack sprayed around the room. No weapon was ever found.

"This was a crime of passion. This was personal," lead Crown prosecutor P.J. Veniot told the court. "This was not a random killing by a crackhead."

Prosecution lawyers acknowledged the case is circumstantial but say Dennis Oland had motive and opportunity. He is the last known person to have seen Richard alive and paid that final visit to his millionaire father at a time when his personal finances were in disarray and he was struggling with debt.

"It's about a father and son, one wealthy and one not," Veniot said of the case.

Dennis Oland's defence team, led by Toronto lawyer Alan Gold, focused on mistakes by the Saint John Police Department in its investigation of the killing. There were so many errors, especially in protecting and preserving the crime scene, the defence called into question the reliability of evidence.

Gold said police officers fell victim to "confirmation bias" having decided early on that Dennis Oland was their suspect. He said police "failed to adequately process the scene" and "overlooked third parties."

"If the pieces don't fit, you must acquit," he told the court.