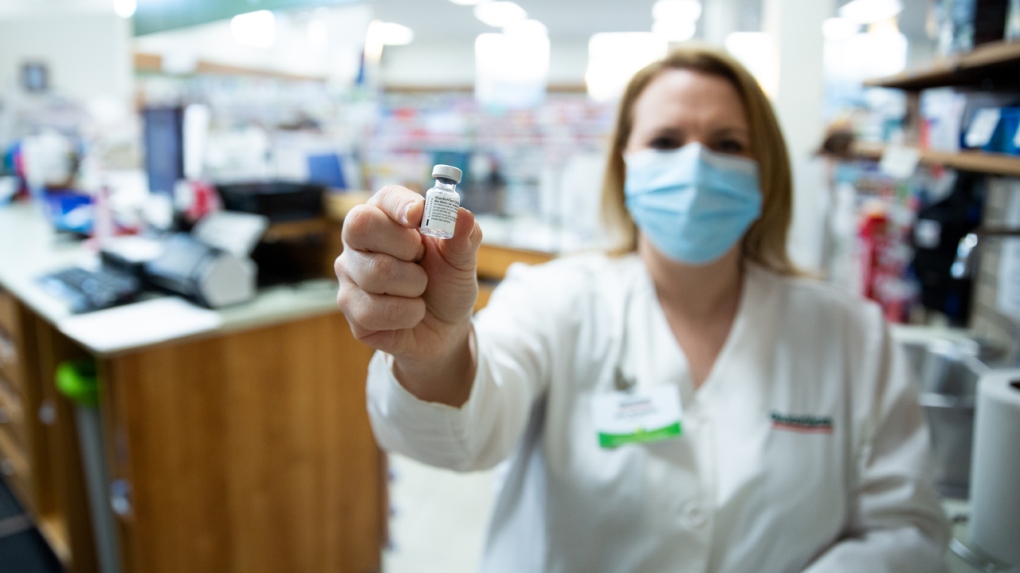 New Brunswick has had 1,462 cumulative confirmed cases since the pandemic began. In total, 1,398 people have recovered, and 29 people have died in the province from COVID-19.

Three people are in hospital, two in the intensive care unit, with COVID-19.

Public health says 782 tests were completed on Wednesday in New Brunswick, and 238,409 total since the start of the pandemic.

New Brunswick’s provincial government announced Wednesday that pharmacies will play a key role in the next phase of the COVID-19 vaccination plan.

Beginning Wednesday, New Brunswickers who are 85 and older can contact a pharmacist to set up an appointment to receive their first dose of the COVID-19 vaccine.

Public health says appointments will be scheduled at nearly every pharmacy in the province, with the first vaccinations starting March 17.

“Right now, only those who are 85 and older, or those calling on their behalf, can contact pharmacies to book an appointment,” said Health Minister Dorothy Shephard in a release. “We have seen how booking systems in other provinces have been overwhelmed and how residents of some provinces have been forced to queue up to wait for vaccines. We do not want that to happen here, which is why our plan includes a gradual, sequential rollout.”

Dr. Jennifer Russell, chief medical officer of health, said that while the vaccine is currently only available to the 15,000 New Brunswickers who are 85 and older who live in the community, it will be accessible over the coming months to everyone who would like to be vaccinated.

“New Brunswickers have played a tremendous role in keeping our COVID-19 numbers among the lowest in the country by following public health advice and avoiding actions that would overwhelm our health-care system,” Russell said. “In the same way, we ask you to patiently wait for your group to be identified before trying to book an appointment for vaccination.”

Vaccines will be administered by appointment only. At this time, appointments may be booked only by individuals who are 85 or older or by a family member or caregiver on their behalf. People who meet the criteria are asked to book only one appointment in one location.

The province says more details about their updated COVID-19 vaccination plan, including timelines for additional age groups and priority groups will be provided on Friday.

New Brunswick's COVID-19 online dashboard provides an update on the amount of vaccines that have been administered to date.

As of March 8, 38,483 doses of COVID-19 vaccine have been administered so far, with 12,152 people in New Brunswick having received a second dose.

The province has received a total of 56,135 doses of COVID-19 vaccine, and are holding 17,652 in reserve for second doses and planned clinics.

All New Brunswick zones are in the Yellow level under the province's pandemic response plan.

Prior to the changes, which took effect Monday, the province had been in the more restrictive "orange" level following a spike in case numbers dating back to January.

“As we transition to Yellow level, we must still remain vigilant especially with the presence of variants that can be transmitted more easily. It is still important to keep your circle of close contacts relatively small and continue to follow public health advice,” said Dr. Jennifer Russell, chief medical officer of health in Sunday’s media release.

On Wednesday, 1,600 personal and 1,552 commercial vehicles attempted to cross the border into the province.

Of the vehicles attempting to cross the border, 27 were refused entry, for a refusal rate of 0.9 per cent.

'Stronger together': Canada honours COVID-19 victims a year into pandemic

What do Canadians miss most after one year of COVID-19?

'Pandemic within a pandemic': Expert sounds the alarm over variants in Ontario

Sudbury and Manitoulin going back into lockdown Friday

Ontario logs more than 1,000 new COVID-19 cases for fifth day in a row

Denmark suspends use of AstraZeneca vaccine as 'precautionary measure'

'Huge miracle': Hear from the woman who gave birth while in a coma with COVID-19 complications