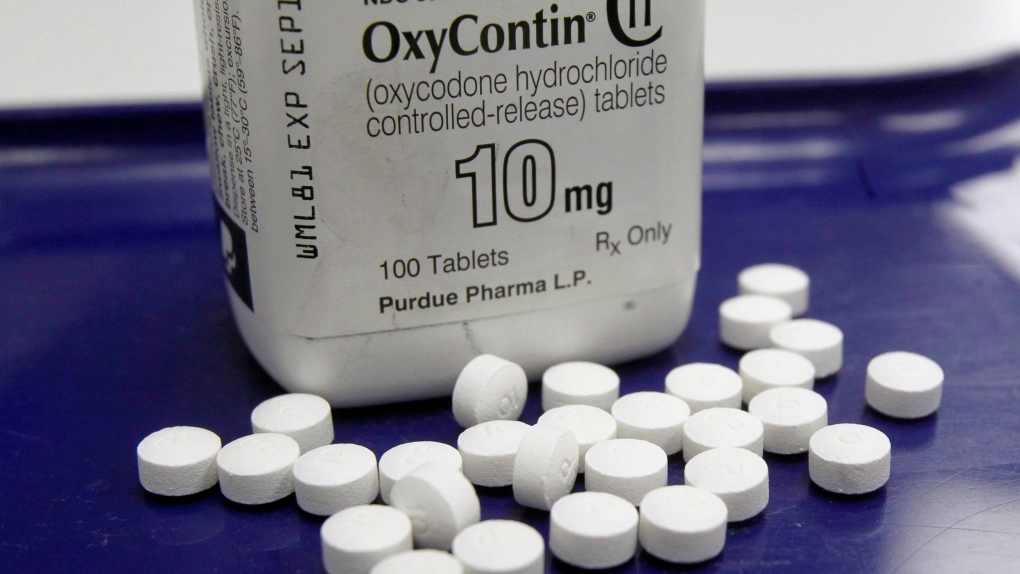 OxyContin pills are arranged for a photo at a pharmacy in Montpelier, Vt., on Feb. 19, 2013. (AP Photo/Toby Talbot)

HALIFAX -- Jayne Turner couldn't change an out-of-court deal in a lawsuit against the manufacturer of OxyContin on Tuesday, but she had her say before a Nova Scotia judge on how the prescription painkiller forever altered her life.

"I lost a husband and everything he represented. ... All that could have been, never can be," the New Brunswick woman told Justice John Murphy, a few minutes before he ruled in favour of accepting a class action settlement of $20 million to be paid by Purdue Pharma.

Murphy became the second judge to approve a settlement of the national lawsuit. With acceptances in Ontario and Nova Scotia, it must now go before judges in Quebec City and Regina before the settlement is finally completed.

Speaking quietly in the small, almost empty courtroom, Turner told the judge how her husband -- Robert (John) Turner -- started on the prescription painkiller in the late 1990s as part of a study he'd hoped would help him cope with debilitating back pain.

It helped the lobster fisherman haul his gear in the first year, but as the dosage rose he became addicted and lapsed into periods of deep fatigue and mood changes, Turner said.

On April 30, 2012, Turner fell asleep and toppled off his lobster boat, with a coroner determining his body was coping with a large dose of OxyContin, she said.

Turner was one of nine people listed by the plaintiffs' lawyer, Ray Wagner, as objecting to the $20 million agreement, with $2 million going to health authorities and about a quarter expected to be assigned as legal fees.

The judge thanked the 51-year-old for her submission and said it, along with a submission by Adam Spencer of Moncton, N.B., gave him "pause."

However, Murphy ruled he would accept the proposed settlement, echoing the decision of an Ontario Superior Court judge that the amount falls within a "zone of reasonableness."

The Nova Scotia judge said he accepted arguments that if the case had proceeded to trial there were formidable legal obstacles to overcome and it could have meant years more of delay in the 10-year-old case.

"If the case proceeds to litigation, there is a significant risk that the claims against the defendant will not succeed," he said.

The plaintiffs had argued that the U.S.-based manufacturer didn't provide adequate warning about potential addictions.

However, Purdue did not admit liability in the national settlement.

In addition, Wagner -- whose firm launched the action in 2007 -- says there were legal arguments the company could rely on against his case, such as the role doctors played in prescribing the drug.

The lawyer said one of his concerns is that Canadian regulators have never stepped in to launch a prosecution or thorough investigation of the marketing methods used for the prescription painkillers.

There "are a lot of questions asked about why there wasn't regulatory action, but that is for another place," he said in court.

Matthew Herder, director of the Health Law Institute at Dalhousie University, said the Food and Drug Act allows for charges if there has been false or misleading marketing about a drug. The law professor said Canadian governments have been reluctant to use this power, and noted civil lawsuits can end without an assignment of legal liability.

"I think what bothers me is that there doesn't have to be any admission of guilt," Turner said Tuesday.