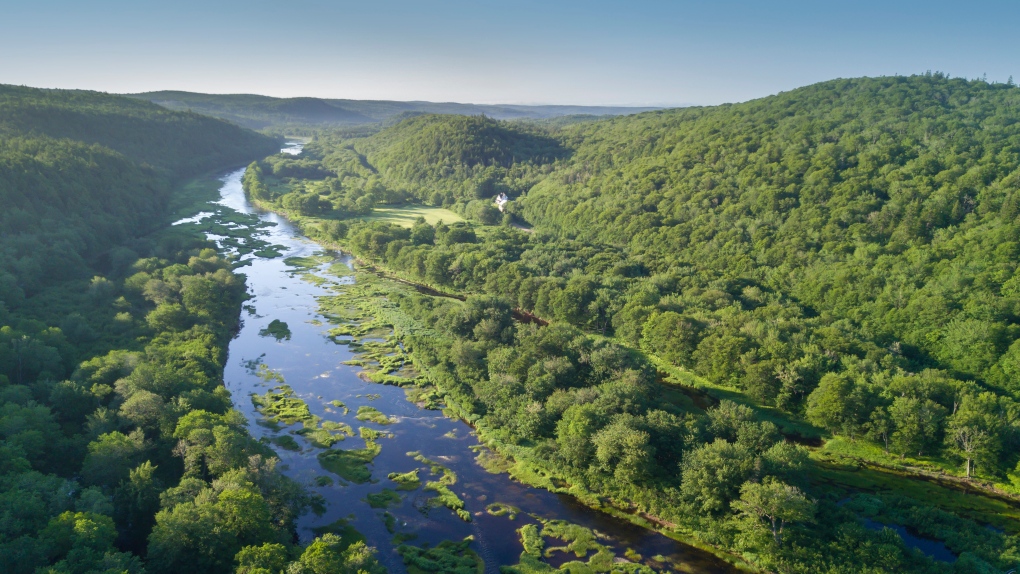 A nature conservancy organization is expressing concerns about a proposed gold mining operation near what it calls a "biodiversity hot spot" in Nova Scotia's Guysborough County. A section of the St. Mary's River is seen in an undated handout. (THE CANADIAN PRESS/HO-Nova Scotia Nature Trust, Scott Leslie)

HALIFAX -- A proposed gold mine in Nova Scotia's Guysborough County is being questioned by a conservancy organization concerned about the operation's proximity to a "biodiversity hot spot".

Bonnie Sutherland, executive director of the Nova Scotia Nature Trust, said Thursday the open-pit mine to be operated by Atlantic Gold would be next to unique and ecologically sensitive lands along the St. Mary's River.

Sutherland said the area contains some of the last old-growth and Acadian flood plain forests in the province.

"It's a very unique habitat. It supports a number of species that are at risk ... endangered turtles and birds, and there are Atlantic salmon in that river," Sutherland said.

Part of the proposal by Atlantic Gold would see a nearby highway re-routed near a 93-hectare property recently donated to the trust by the family of Paul Sobey, the retired former president and CEO of Empire Co. Ltd. That land is one of four newly protected areas along the river.

She said while the trust isn't opposing the mine project, it is worried about the impact of related infrastructure.

"We're not speaking out against the mine or anything that extreme, it's more there's an issue here," she said. "The broader question of whether the mine is the right thing for that community, that's really way beyond the mandate and expertise of the nature trust."

Atlantic Gold wants to dig the mine in an area north of the community of Sherbrooke, N.S.

The company drew criticism when an environmental activist was arrested and forcibly removed as a public meeting was conducted in Sherbrooke last week.

The arrest of John Perkins, a member of Sustainable Northern Nova Scotia, was captured on video and circulated widely on social media. He was later released without charges.

Derek Mombourquette, the provincial minister of energy and mines, said he hasn't seen the video, but if Perkins has a complaint he can approach the province's Serious Incident Response Team -- which has a mandate to review "matters of significant public interest that arise from the actions of any police officer in Nova Scotia."

Meanwhile, he said, the company is expected to continue consulting with the public as it proceeds with its application to develop the mine.

In an email, Dustin O'Leary, a spokesman for Atlantic Gold, said the company recognizes the St. Mary's River watershed is an ecologically significant area, adding that its protection is "top-of-mind."

O'Leary said the company has retained scientists and engineers to conduct studies in and around the proposed Cochrane Hill mine site.

"These studies will predict potential environmental effects and allow us to design and apply the best available engineering and environmental practices that will reduce any effects to insignificant levels," he said.

Once the studies are concluded, O'Leary said they will support the development of an environmental impact statement being prepared for submission to the Canadian Environmental Assessment Agency and the Nova Scotia Environment Department later this year.

"We believe that the Cochrane Hill Gold Mine project can be designed and operated in a way that ensures the continued health and protection of the St. Mary's River and its watershed," O'Leary said.

The Nova Scotia Nature Trust works with communities, other conservation organizations and government to protect wilderness in the province. The non-profit, charitable organization says it currently protects more than 5,666 hectares across Nova Scotia.

The Progressive Conservative and NDP leaders weighed in on Perkins' ejection from the company's public meeting, saying it raised concerns for them.

"People need to be able to feel they had their say, and in this case, there's a lot of people that feel that somebody didn't get to have their say because the police were called," Houston said. "That's not a good message to be sending."

NDP Leader Gary Burrill also saw the video and said it doesn't reflect well on the company's level of consultation. "Consultation should not be consulted in handcuffs," he said.