N.S. Mi'kmaq fisher says his movements are being watched and his traps seized by DFO

By Michael Tutton in Halifax 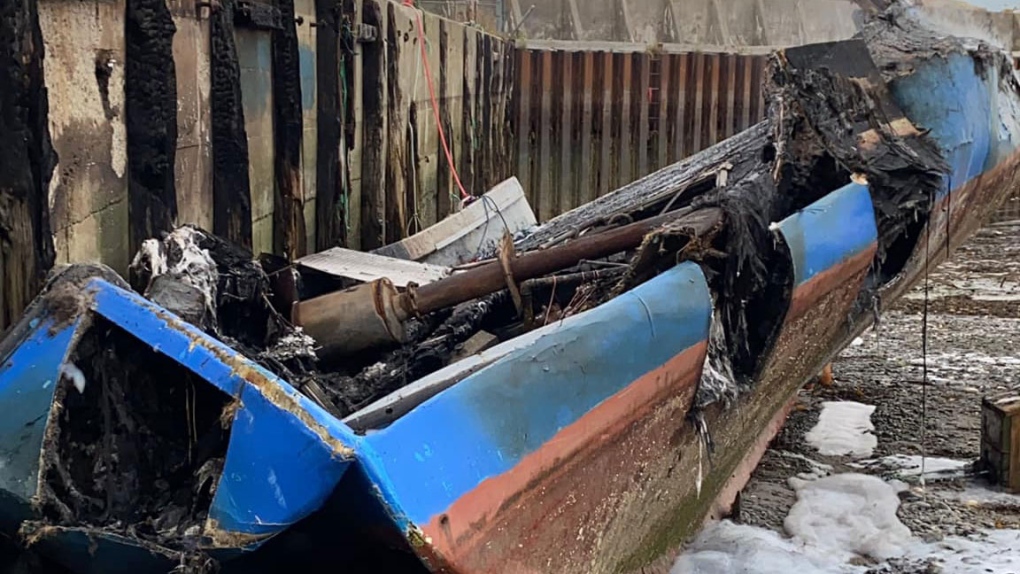 Robert Syliboy's lobster fishing boat is shown after being destroyed by a fire in this Monday, Oct. 5, 2020 handout photo. A lobster vessel belonging to a Mi'kmaq fisher has been destroyed by a suspicious fire. THE CANADIAN PRESS/HO - Robert Syliboy

Craig Doucette, a lobster fisher from Potlotek First Nation, said Wednesday he estimates officers with the Department of Fisheries and Oceans have seized about 40 of his lobster traps in St. Peter's Bay since May 10.

Doucette said he feels his actions are being monitored because enforcement officers quickly seize his traps soon after he sets them. "As it stands, right now, they kind of watch me," he said in an interview.

"They watch me when I'm in town in my vehicle. They watch me on the water. They know when I leave the water and go home and that's when they go in and take my traps."

He argues he is legally permitted to fish without a federal licence as a result of a 1999 Supreme Court of Canada decision affirming the Mi'kmaq treaty right to fish for a "moderate livelihood." The decision, however, was later clarified by the court, which said the government can regulate that treaty right for conservation and other limited purposes.

Last month, Indigenous lobster fisher Robert Syliboy of Sipekne'katik First Nation had two of his crab traps seized off Sherbrooke, N.S., and he, too, said he felt federal enforcement has become more aggressive than it was the prior season.

Syliboy has said the crab he wanted to harvest was solely for a community feast and that he didn't need Ottawa's permission to fish.

Federal Fisheries Minister Bernadette Jordan has said Ottawa has the right to enforce federal regulations in connection with moderate livelihood fisheries, and that Indigenous fishers need to have a federal licence this season.

Carole Saindon, a spokeswoman for the Fisheries Department, said Wednesday the government is working with Potlotek First Nation and other Mi'kmaq communities to "implement fishery plans so they are able to exercise their treaty rights."

"We can confirm that fishery officers have been engaged in operations in the St. Peters Bay, Nova Scotia area over the past few weeks," she said in an email.

"Any fishing activity occurring outside of the Fisheries Act and associated regulations, without a licence or in contravention of a licence issued by the department, is subject to enforcement action, no matter the harvester."

Sipekne'katik Chief Mike Sack has announced his band intends to relaunch a fishery in St. Marys Bay starting in June -- outside the federal commercial season and without federal licences. That decision means his community's fishers could also have their traps and gear removed.

Last fall, tensions erupted after Sipekne'katik launched a self-governed fishery and members of the band encountered violence from non-Indigenous residents, resulting in the destruction of a lobster pound and the burning of a band member's van in southwestern Nova Scotia.

Doucette, whose band is located 77 kilometres south of Sydney, N.S., said he doesn't intend to stop fishing. The band has launched a civil action in Nova Scotia Supreme Court to force Ottawa to stop seizing Doucette's traps and other traps from the community.

Potlotek Chief Wilbert Marshall has said the seizures reflect a failure of the federal government to uphold treaty rights.

This report by The Canadian Press was first published May 19, 2021.