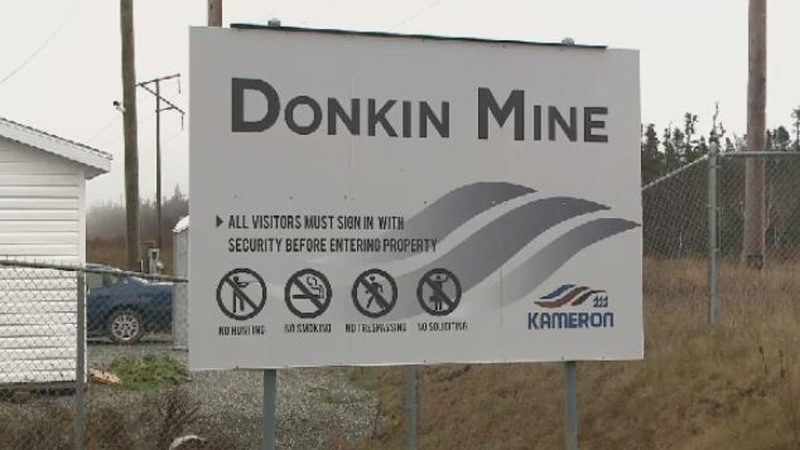 Cape Breton's Donkin coal mine is seen in this undated file photo.

DONKIN, N.S. -- Nova Scotia's Labour Department has allowed a limited increase in production at Canada's only operating underground coal mine after a series of roof collapses last year.

Kameron Coal's operations in Cape Breton were suspended for just under a month by the province in late December before it was allowed to partially resume activities in one portion of the mine while it prepared a revised roof support plan.

Scott Nauss, the province's senior director of inspection compliance, said the new plan approved on May 7 allows Kameron to mine in two sections of the Donkin mine totalling 730 metres of added rock face, which is less than 10 per cent of the mine.

Nauss said in an interview Wednesday the province is still in discussions with the American-owned colliery to provide an approved plan on ventilation, electrical operations and mining operations.

Nauss said it's only when those three additional aspects are in place and approved that the full mine will be allowed to go back into production.

New measures for roof safety include roof bolts that are about 61 centimetres longer and more frequent inspections to see if there is any sign of roof movement.

The last suspension of the mine followed a roof collapse just after Christmas, resulting in the province ordering the company to seek independent advice on a fresh roof plan. That was the second collapse that month.

The December collapses came 11 weeks after a six-day closure in October, which was ordered after the company didn't report two massive cave-ins within the required 24 hours.

Inspection documents say both reported collapses had spanned the entire six-metre width of a passage, as slabs of rock fell and left a ceiling gap up to almost four metres deep. The first rock fall ran over 18 metres along the underground roadway, while the second was about a third of the length of a football field.

The delay in reporting the falls resulted in a citation for contravention of a section of the province's underground mining regulations. There was no fine for that infraction.

The company was fined $2,000 for an accumulation of combustible coal dust and $2,000 for failing to implement the original roof plan in a way that "may have provided an indication that the roof strata were exhibiting signs of potential failure."

As with the earlier collapses, no workers were injured.

Nauss said Wednesday that in January both the company and the province separately hired independent experts on roof supports to tour the mine and bring in "industry-best" practices.

Kameron Coal, a subsidiary of U.S.-based Cline Mining Corp., said in an emailed statement, "we are very busy at the mine and this is a great thing for our employees."

The company said it is "continuing to develop the underground infrastructure in the areas covered under the approved ground control procedure."

Since it opened, Kameron has received 70 orders telling it to comply with a mining rule and 102 warnings of failure to comply.

--By Michael Tutton in Halifax.