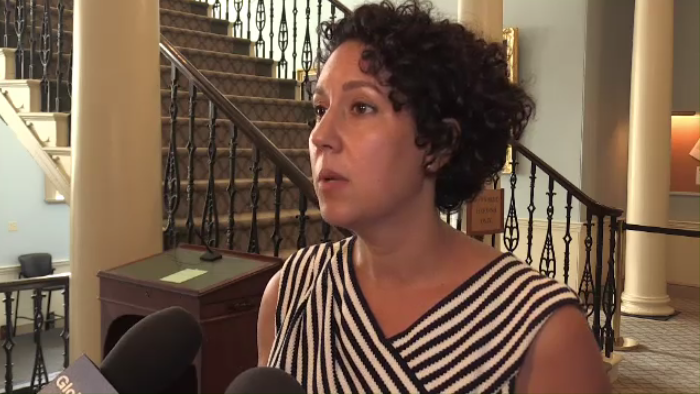 "It is extremely disheartening and upsetting to see Nazi imagery in Dartmouth," Claudia Chender said.

HALIFAX -- A Nova Scotia politician whose grandparents fled the Holocaust says she is disheartened that graffiti using Nazi imagery was found in several places near her Halifax-area riding.

NDP MLA Claudia Chender said swastikas were spray-painted at a school in the Sullivan's Pond area of Dartmouth and at a nearby church over the weekend. There was also offensive graffiti found at Prince Andrew High School.

"It is extremely disheartening and upsetting to see Nazi imagery in Dartmouth," said Chender in a phone interview Monday.

"As a parent and a politician and as the education critic, it is deeply upsetting that we would see these symbols on schools, which are really the key sites of inclusion and learning in our communities."

Chender said three of her grandparents actively fled the Holocaust, and resettled in North America.

"In my family, there is never any question -- there is no place for that level of intolerance," said Chender, who represents the riding of Dartmouth South.

"I've spoken to a number of people who have said, 'Oh this is probably just the work of careless teenagers' ... But we know that the root of those ideologies is hatred, but also ignorance. And so I think it's really important that when we see that kind of visual symbol of intolerance and hatred and xenophobia, that we speak out against it."

Chender added: "It's encouraging to see the community response, which is clearly that there's no place for that."

McLeod said it's not yet known if the incidents are related, but it's possible. He would not elaborate on what the graffiti showed.

"We just don't think that it's necessary to further spread that kind of information," he said, adding that it could also be pertinent to the investigation and in identifying a suspect.

"It would be far too premature for us to speculate on what their motive was and what the actual intent of the characters were."