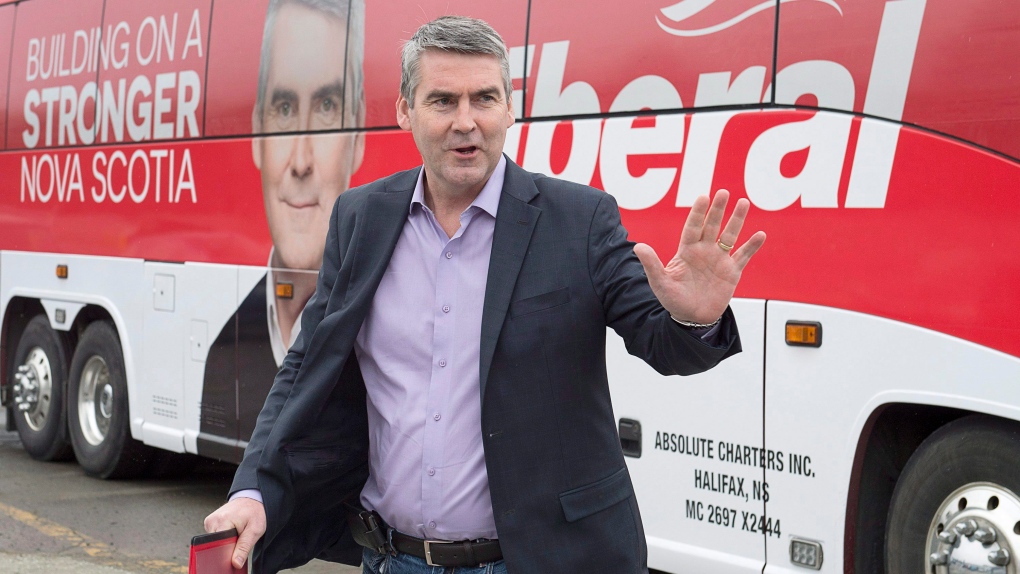 Nova Scotia Premier Stephen McNeil arrives for an infrastructure announcement as he campaigns in Halifax on Monday, May 1, 2017. (Andrew Vaughan/The Canadian Press)

HALIFAX -- In a province where it can take months to see a mental-health clinician, Keith MacIsaac wanted to let Premier Stephen McNeil know how facilities such as Halifax-based Laing House are vital to the recovery of those with mental illness.

The 27-year-old Dalhousie University student had a brief word with McNeil on Friday, following a campaign stop to announce a Liberal commitment of $34 million over four years to improve access to mental-health services across the province.

"We talked about how Laing House is really important for recovery," said MacIsaac. "I came here when I was in a really tough spot, pretty isolated with my mental-health issues, and since then I have been able to achieve a great amount of recovery."

Laing House is a drop-in centre for youth aged 16-29 who live with psychosis or mood and anxiety disorders. It provides peer support through a variety of programs including art, music and camping.

McIsaac said he was dropping by to work on an art project, adding that his role in the house is now less about recovery and more about helping others get the support they need.

He said facilities like Laing House help build routine and break the isolation and self-stigma felt by those who have mental illness.

Still, MacIsaac told reporters that access to care is an issue for many people, particularly younger Nova Scotians. He said it can take months to see a clinician for people who aren't in extreme crisis.

""I think there is a struggle to get access," he said. "I got access decently quickly because I ended up being hospitalized for my mental illness, but that's not the best route to go if you want to have care."

McNeil said the Liberals would hire 35 new mental-health clinicians as part of a plan to provide more community-based options.

Another 51 mental-health clinicians are to be hired through the expansion of the SchoolsPlus program announced in the proposed budget last month.

McNeil said the Liberals would also create a central intake system to ensure patients get the care they need.

"It's very similar to what happens now if you enter into the health-care system showing chest pains," said McNeil. "You're immediately sent somewhere to get the appropriate level of treatment."

McNeil said mental-health support workers would also be part of the 70 or more collaborative-care teams that would be created under a Liberal promise announced Thursday.

Among other initiatives is $2 million in funding over two years to pilot four youth health centres in Nova Scotia schools.

McNeil said the key to making a difference will be thoughtful investments in the system.

"Your decisions have to be evidence based," he said. "You've got to do what's right for these patients."

Hilary Rankin, executive director of the Laing House Association, said as things stand it is significantly more challenging for people in rural areas of the province to get access to mental-health services.

"We'll often have people coming here . . . saying gosh, I wish there was something like Laing House where I'm from," Rankin said.

She said her organization has expanded its reach and now has satellite groups in Yarmouth and in Sackville and is looking at other areas across the province.

Elsewhere on the campaign trail Thursday, the Progressive Conservatives pledged to spend $729 million over seven years to twin four sections of 100 series highways, with an additional $30 million to improve safety features on other sections of highways not being twinned.

The twinning projects include:

The twinning projects are virtually identical to those announced in a $390 million, seven-year plan announced by the Liberals last week.

Tory Leader Jamie Baillie said the funding would come from his party's promised $2 billion Rebuild Nova Scotia Fund, which would include matching funds from Ottawa.

Meanwhile, the NDP said it would reinstate a film tax credit axed by the Liberal government two years ago.

Leader Gary Burrill said if elected May 30, the New Democrats would re-establish a $23-million yearly film tax credit, with an additional $10 million in the first year.