HALIFAX -- The number of confirmed COVID-19 cases in Nova Scotia has nearly doubled in a week.

Nova Scotia announced 32 new cases of COVID-19 on Wednesday, bringing the total number of cases in the province to 342.

This is the biggest one-day spike in cases in Nova Scotia so far.

As week ago, on April 1, health officials reported that a total of 173 cases of the virus had been confirmed.

"We have to be cognizant that we may be having more disease activity, but also the number of positives you see actually is very dependent on your testing strategy," said Dr. Robert Strang, Nova Scotia’s chief medical officer of health, during a news conference in Halifax Wednesday afternoon.

"I firmly believe that we have a kind of gold standard of a testing strategy."

The province says more than 700 tests were completed Tuesday at the QEII Health Sciences Centre's microbiology lab, which is now operating around the clock.

Nova Scotia’s confirmed cases range in age from under 10 to over 90. Fifty-three per cent of cases are female and 47 per cent are male.

Seventy-seven people have now recovered from the virus and their cases are considered resolved.

Nova Scotia reported its first death related to COVID-19 on Tuesday. The Cape Breton woman was in her 70s and had underlying medical conditions. She died Monday at the Cape Breton Regional Hospital.

Cases have been identified across the province and more information is now available in an online map. The map is broken down by the Nova Scotia Health Authority’s four zones and indicates where testing took place. 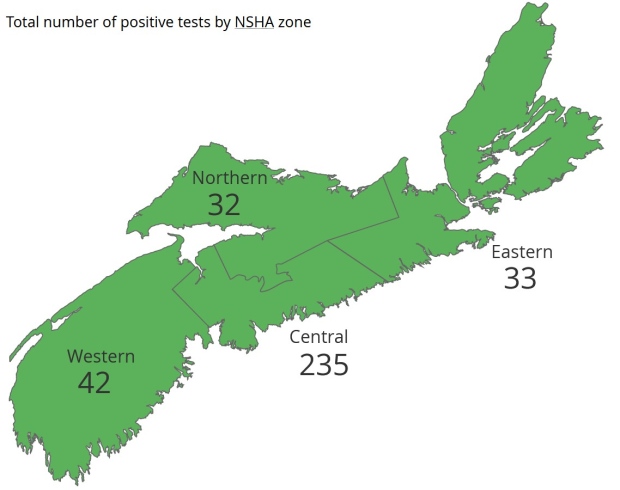 Most cases are connected to travel or a known case, but health officials have confirmed community spread in the province.

“Now that we have removed travel from the screening requirements … we are certainly going to expect that more and more Nova Scotians will meet the criteria for testing, and that’s actually good news,” said Strang.

Health officials have also expanded the list of symptoms for which people are being screened. Anyone who experiences two or more of the following symptoms is urged to take an online questionnaire to determine if they should call 811:

“We’ve expanded and broadened our testing, which means we are catching more positive cases, including the mild ones, and that’s good news,” said Premier Stephen McNeil.

“The bad news is that COVID is in our communities. And that’s why everyone, no matter where you live, no matter your race, no matter your religion, everyone must follow public health protocols. The virus does not discriminate and if you do not follow the rules, it will follow you.”

Public health is working to identify people and test people who may have come in contact with the confirmed cases.

People who claim to have COVID-19 symptoms are calling 911

Strang said he has received reports of people calling 911, claiming to have COVID-19 symptoms when they don’t.

“Thinking that somehow if they say they have COVID symptoms, they’re going to get faster attention from 911,” said Strang.

“That has to stop. Saying you have COVID will not assure you in any way that you’re going to get faster attention and it causes unnecessary anxiety with the EHS crews, and it’s a waste of resources of precious personal protective equipment in our health-care system.”

Strang is urging people to be honest about their symptoms when calling 911 or 811 and says they will receive the attention they need based on the urgency of their situation.