The province said the woman was in her 70s and had underlying medical conditions. She died Monday.

Dr. Robert Strang, Nova Scotia’s chief medical officer of health, confirmed the woman is from the Cape Breton area, but he wouldn’t release any additional details.

CTV News has learned the woman died at the Cape Breton Regional Hospital in Sydney, N.S.

“To her family, there are no words that I can say to take away the pain and suffering that your family is experiencing today,” Nova Scotia Premier Stephen McNeil said during a news conference in Halifax Tuesday afternoon.

“I hope that you know this entire province has its arms wrapped around you as a family as you go through this very, very difficult time.”

Strang said Public Health is working with the hospital to identify other individuals who may have been exposed to COVID-19.

“It’s unfortunate that this death has happened, but we do know the sad reality of COVID-19 is that people do die from this disease. It is a serious issue,” said Strang.

“It’s why we’re doing what we’re doing. If we just did nothing and let COVID-19 blaze through our communities, it would be over soon, but we would have hundreds and hundreds of preventable deaths.”

A frustrated McNeil doubled down on his orders to stay home and practise physical-distancing as the province reported its first COVID-19 death.

“As you are planning your weekend, there is a Nova Scotia family planning a life without their loved one because of this virus. This virus kills and the only way we can kill it is if we keep our distance from one another,” said McNeil.

“For the love of God, stay home and stop partying, please, for the sake of our province.”

This is the first recorded COVID-19 death in the Maritimes, but not the first in Atlantic Canada; Newfoundland and Labrador has reported two deaths related to COVID-19.

Nova Scotia also reported 17 new cases of COVID-19 on Tuesday, bringing the total number of cases in the province to 310.

The QEII Health Sciences Centre's microbiology lab completed more than 530 tests on Monday and is now operating 24 hours a day.

Strang said about 90 per cent of the province’s COVID-19 cases are related to travel or a known case, but health officials are seeing more evidence of community spread.

“We have a number of clusters of groups that, people interacting with each other in multiple cases where the only explanation we have, is that originally the virus got inserted into that group from somewhere that must have come from the community and now it’s continuing to spread within that group, within the community,” said Strang.

As a result, the province has removed travel as a requirement for testing.

Eleven people are currently in hospital. Of the 11 patients, Strang said four are in intensive care units.

Sixty-six people have recovered from the virus and their cases are considered resolved.

Strang noted that while seniors and people with medical conditions are the most vulnerable, they are not the only people ending up in hospital.

“We are seeing previously healthy young people also getting severe disease and dying. This disease does not respect age,” he said.

Fifty-one per cent of cases are female and 49 per cent are male.

There are cases across the province, with the greatest numbers reported in the central zone. 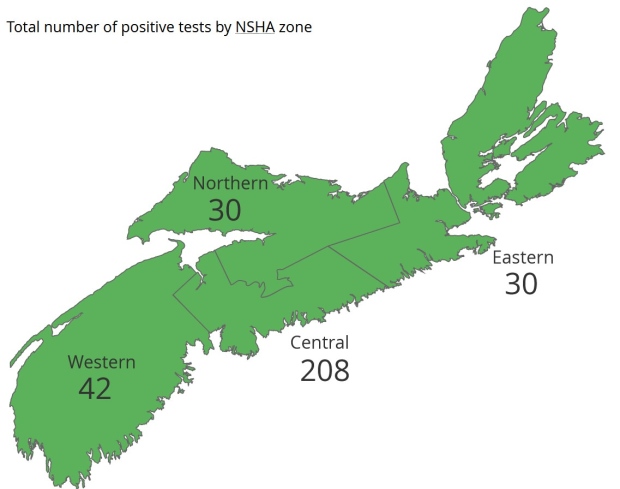 Concerns about communities with increased activity

The province has established temporary assessment centres in Elmsdale, Enfield and North Preston, due to concerns about increased COVID-19 activity in those communities.

Strang said he is especially concerned by the pattern of how the virus is spreading in North Preston, East Preston and Cherry Brook.

“Going in with a temporary assessment centre is part of working with the community to help understand those issues,” said Strang.

Strang said there are cases in the broader Halifax area that have been linked back to these communities and he is concerned that individuals aren’t abiding by the rules set out by the province.

“Unfortunately, there are groups in these communities that are, because of their willful not following the requirements to minimize social gatherings, to stop unnecessary social interaction, are a key piece of what’s driving the disease within these communities,” he said.

While some communities are seeing more cases than others, Strang stressed that there are cases across the province, so all Nova Scotians, regardless of where they live, need to heed the advice of health officials.

Reports of crowding at grocery stores

McNeil and Strang said they are also frustrated by reports of too many people shopping at grocery stores and failing to keep their distance from other shoppers.

“All the science says it works, so for crying out loud, just do it. Keep your distance,” said a frustrated McNeil.

Strang noted that people are likely preparing for the Easter weekend and he is asking them to shop responsibly.

“There are just too many instances of people still not getting it. And by doing that you’re putting us all at risk,” he said.

Strang said employees with the Labour Department will be visiting grocery stores and big-box stores over the next few days to help them create a “safe environment” for workers and shoppers.

Nova Scotians who develops COVID-19 symptoms, such as a fever, new cough or acute respiratory illness, are urged to limit their contact with others and take an online assessment questionnaire to determine if they should call 811.