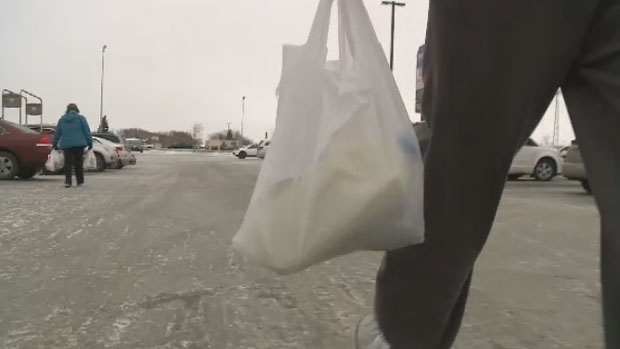 Earlier this month, Nova Scotia's environment minister granted Halifax temporary permission to dump plastic in its landfill as the city scrambled to dispose of its plastic waste when its only market -- China -- dried up.

HALIFAX -- Nova Scotia's environment minister says he's "seriously considering" enacting a province-wide ban on plastic shopping bags -- a move that would make it the first province to do so.

Iain Rankin said he was looking at all options to reduce the use of so-called film plastics, including an outright ban or fee on plastic bags.

"Everything is on the table," he told reporters Thursday after a Liberal government cabinet meeting. "We have to reduce the amount of plastics we use in the province."

Rankin said he has held "important discussions" with solid waste representatives in every region of the province and that the government will make a decision "in due time."

Earlier this month, Rankin granted Halifax temporary permission to dump plastic in its landfill as the city scrambled to dispose of its plastic waste when its only market -- China -- dried up.

Rankin says the six-month measure could be extended, though plastic will remain banned from the province's landfills.

Halifax council voted this week to examine banning plastic bags within the municipality.

Mayor Mike Savage is also expected to write a letter to Nova Scotia's premier expressing the city's preference for a provincial ban.

"Eventually, I think we will ban plastic bags," Savage said in an interview Thursday. "I think it's a matter of time for municipalities and provinces everywhere."

The Retail Council of Canada has said that while a ban is not its preferred option to reduce plastic, it said a province-wide ban would be preferable to having a patchwork of different rules in municipalities across Nova Scotia.

"It's incumbent on me to listen to what Nova Scotians want to do, especially the business community and the municipalities," Rankin said. "Some of our stakeholders prefer a province-wide approach (to banning plastic) so we're very seriously considering that."

With both the province's largest municipality and the retail association expressing support for a plastic bag ban, it appears Nova Scotia could be the first province in Canada to ban the single-use plastic bags.

"We're a leader in how we manage solid waste," Savage said. "I think we want to continue to be."

From composting to switching to clear garbage bags, he said there is always criticism to change and people that don't agree.

"Each of those things have worked very well for the municipality," Savage said. "It doesn't mean that people are wrong to be opposed to them but it does mean they had a positive impact on our community."

However, a ban on plastic shopping bags doesn't address all film plastics, which includes cereal box liners and the wrapping around products like toilet paper, water bottles or juice.

The environment minister said the province is also examining extended producer responsibility, a policy that makes the producers of goods responsible for the end-cost of disposing packaging. The concept is intended to encourage manufacturers to reduce packaging and make it more environmentally friendly, while keeping more materials out of the landfill.

"Shopping bags only constitute about half of the overall film. We still have to find markets for other types of film," Rankin said. "That's why this isn't just a knee-jerk reaction from our department. We're going to analyze all options and it could be a combination of options."

- With files from Keith Doucette