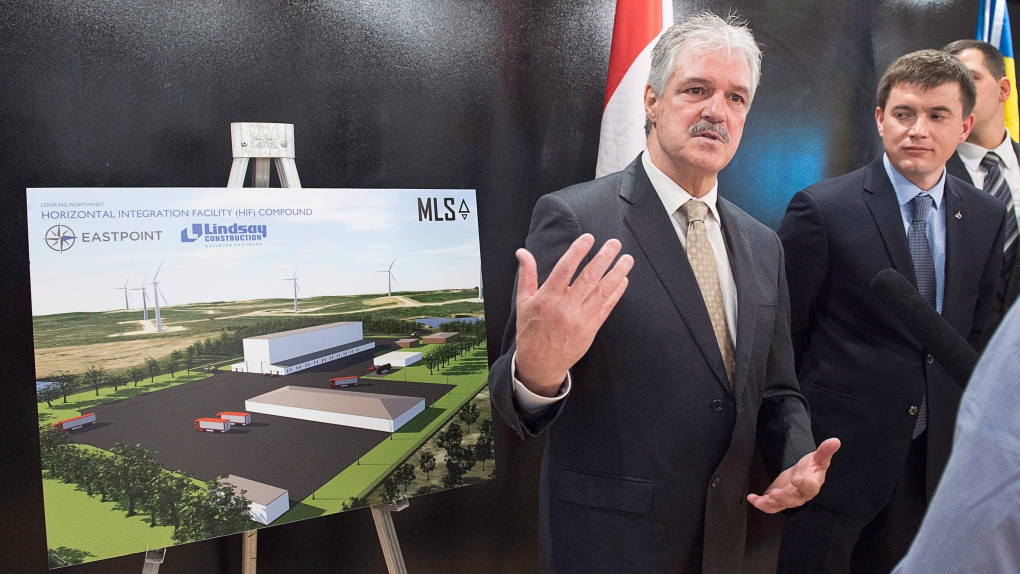 Stephen Matier, left, president of Maritime Launch Services and Maksym Degtiarov, chief designer of the launch vehicle at the Yuzhnoye Design Bureau, talk with reporters at a meeting of the proposed Spaceport project team in Dartmouth, N.S. on Monday, Dec. 11, 2017. (THE CANADIAN PRESS/Andrew Vaughan)

CANSO, N.S. -- The head of a firm hoping to open Canada's only commercial spaceport says they remain on schedule for a slated first satellite launch in 2021, even though provincial authorities have withheld approval pending more information.

Environment Minister Margaret Miller said provincial consultations uncovered concerns about the proposed Canso Spaceport Facility, and Maritime Launch Services Ltd. will need to address them before the project goes ahead.

The Canso Spaceport Facility, near the small community of Canso in eastern Nova Scotia, would be 20 hectares in size and is aimed at attracting firms that want to put satellites into orbit.

Miller said Maritime Launch Services -- a Halifax-based company which is a joint venture of three American based firms -- has a year to submit a report.

Maritime Launch Services president and CEO Stephen Matier said while Thursday's decision put a damper on their plans for a groundbreaking later this year, they still plan on beginning construction in the spring.

"We will do it as quickly as we can, and as correctly as we can, we don't want to see this thing drag out," he said.

"We certainly want to see this project through to success, we're certainly committed to making it work."

The environmental assessment study filed last month by Maritime Launch Services references surveys of at-risk species in the area, such as mainland moose and bats.

The study, prepared by independent contractor Strum Consulting, also proposes mitigation efforts in the event of a fuel spill or launch failure, and cites consultations with local groups that might be affected by construction or potential pollution from the rocket launches.

Matier said he's "disappointed" that their original application wasn't enough, but he said he's confident they'll finish the study with plenty of time to spare so they can begin construction as soon as possible.

"We never expected that this would fall off a log easy, we knew there would be challenges, and this is one of them," he said. "We're optimistic."

The government accepted public feedback for the project until Aug. 3, and over a dozen people and groups sent letters and emails, many outlining their concerns.

John Kearney, an avian consultant who did three years of field work in the same location as the proposed spaceport, submitted a nine-page document detailing the types of birds in the area and aspects left out of the original Strum study.

"The climate and weather portion of the registration document provides no information on fog conditions," he wrote. "The project area has frequent fog events, and the combination of fog with other factors greatly increases the risk to birds from the spaceport."

It said the study did not focus enough on how the project would affect the ocean and marine life, and criticized a lack of data about the emissions that would be released during operations and launches.

"What is the chemical composition of the rocket launch exhaust emissions? Do emissions contain any compounds that could be hazardous to the environment and human health?" the council wrote.

"These high atmospheric releases will travel far from the project site and will contribute to air pollution in other places in Canada or globally."

It also said the Aboriginal community accesses and uses the lands and waters within the project area for harvesting, fishing, fowling, and gathering.

Others who submitted feedback echoed concerns about the fuel, with one person writing: "This sounds like a province willing to barter away the health of humans and the natural environment for the sake of generating business."

But a small number of people expressed their support for the project, saying the spaceport would boost the rural area's economy and propel the province into the future.

"The further development of our space flight capabilities is necessary for developing security for humanity as a species," said one respondent. "Furthermore, the development of a spaceport in Nova Scotia will have positive impacts on employment within Nova Scotia for building and then maintaining the necessary infrastructure."

Another wrote in a brief handwritten note: "I firmly support the Canso spaceport facility project. There is not enough work in the Maritimes as it is."

In the meantime, Matier said he's waiting on further instructions from the environmental assessment administrator before beginning to work on the focus report. The administrator has 25 days to provide him with a terms of reference.