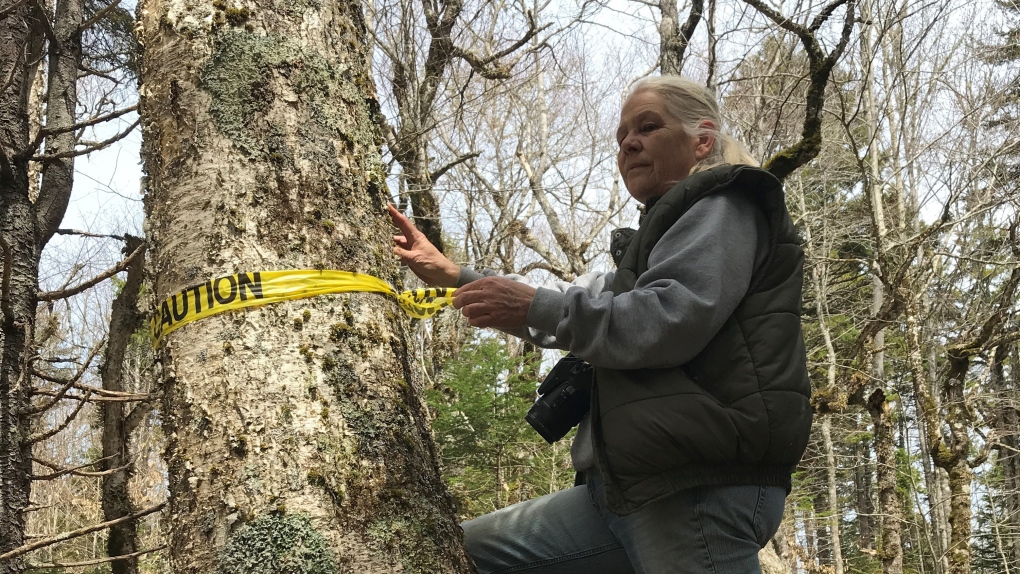 Sue Skipton measures a yellow birch tree growing atop a granite boulder in the Dalhousie Lake – Corbett Lake Crown Lands in a handout photo. The Annapolis County resident us advocating for an end to logging in the lands, as logging is set to resume on Monday in the area south of Bridgetown, N.S. (THE CANADIAN PRESS/HO-Sue Skipton)

BRIDGETOWN, N.S. -- Naturalists are listening for and spotting migratory song birds -- including an endangered species -- in an effort to halt logging of a Nova Scotia forest containing old hardwoods.

A sign went up this week from WestFor Management Inc. saying cutting would resume as early as Monday in an area between two pristine Annapolis Valley lakes known for canoe routes.

Scott Leslie, the author of seven books on natural history, said Friday evening he spotted or heard over a dozen species in the area that faces harvesting, including Chimney Swifts, which are listed as an endangered species in Nova Scotia.

The 56-year-old naturalist said, "in three hours I generated a list of 13 migratory song birds that are breeding in the area."

Gregory Heming, a municipal councillor for the area, said other biologists and naturalists are headed into the woods over the weekend with the goal of showing that the logging will disturb habitat for nesting migratory birds.

In addition, letters were sent to Environment Minister Catherine McKenna, urging her department to investigate the impact of the logging on bird species under the Migratory Bird Convention Act, he said.

"I've never seen such a well-orchestrated, knowledgeable group of citizen scientists that's went after the facts on what is happening," said Heming.

"When they came back to us with all the information it became clear to us it should not be cut."

The province's Forestry Department says the approval for the logging has taken the bird habitat concerns into account, and that a partial cut is a good example of selective forestry.

However, wildlife biologist Bob Bancroft, a former provincial government employee, said he called the RCMP and Environment Canada on Friday to ask them to enforce provisions of the Migratory Bird Convention Act.

The president of Nature Nova Scotia said his coalition of nature groups has asked him to reach out to federal authorities.

"What we've got is reckless disregard with the other animals with whom we share this province," he said.

Environment Canada didn't respond immediately with comment on whether its migratory bird legislation would be considered applicable.

However, the provincial minister of Lands and Forestry, Iain Rankin, said in an interview Friday he hasn't changed his mind on allowing cutting to continue.

"It's been approved and there hasn't been any areas of specific concern to warrant any action from the department," he said in a telephone interview.

Rankin said the partial harvest of the Crown land -- which isn't a formally protected area -- was deemed acceptable by the reviewers in his department.

"There are old trees in some of these stands, which there are all over western Nova Scotia," he said.

Rankin said the harvest is in line with last year's landmark study on forestry in the province by University of King's College president Bill Lahey, which called for a greater focus on biodiversity and ecological forestry.

He said it leaves longer-lived, shade-tolerant species like red spruce, yellow birch and sugar maple, while taking out some of the shorter-lived species like balsam fir.

He also said there are measures taken to attempt to protect birds and their habitat in the trees. "We do have regulations around retention of large legacy trees, cavity trees ... may be kept in place during the harvesting," he said.

The company was not immediately available for comment, but said it was working on a response to a written list of questions to be provided next week.

Bancroft said much of the forest has already been cut, but he intends to continue to battle the harvest. He said he's found downed trees in the stand that were aged over 130 years.

"I've been in there. I've heard them (the birds) call. It's a very unusual forest, though it's going to take the usual demise," he said.

- By Michael Tutton in Halifax.