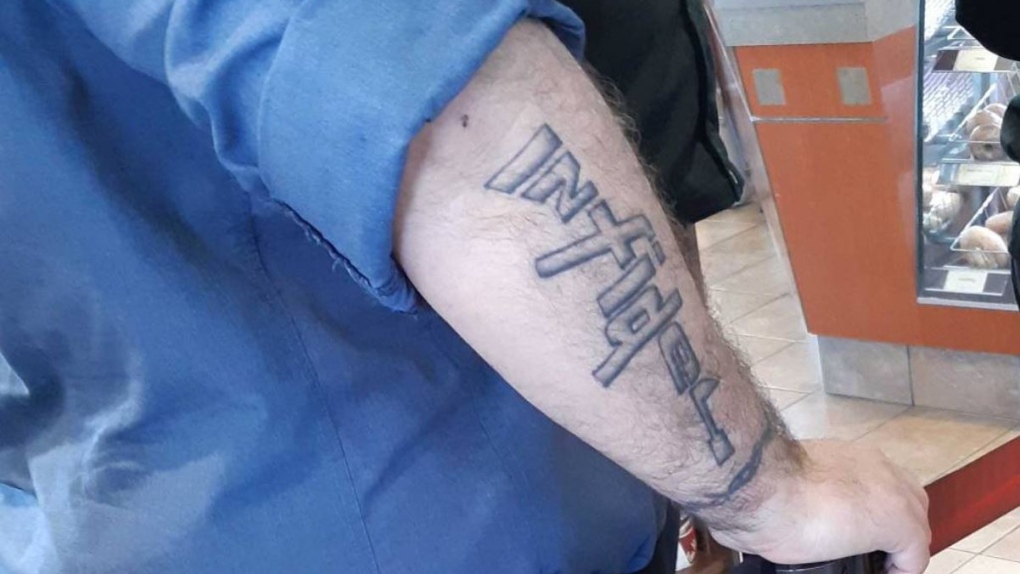 HALIFAX -- The Canadian Forces says a sailor who was publicly criticized for his tattoo featuring the word "infidel" in the shape of a rifle is going to have it tattooed over with another design.

Maj. Mark Gough of Maritime Forces Atlantic says the incident was investigated and the navy determined there was no ill intent on the sailor's part.

Gough says in an email that the sailor understands the concerns raised by the tattoo and "plans to tattoo over this tattoo as soon as possible."

The matter came to public attention as the result of a tweet from a Halifax coffee shop customer in early June which was forwarded to the sailor's superiors.

The photo shows only a man's arm with the tattoo as he waits in line to be served.

The tweet identified the man as being in uniform and wearing an HMCS Fredericton ball cap.

The Canadian Armed Forces has dress instructions related to body tattoos and piercing.

They state: "Members shall not acquire tattoos that are visible either in military uniform or in civilian clothing that could be deemed to be offensive (e.g., pornographic, blasphemous, racist or containing vulgar language or design) or otherwise reflect discredit on the CAF."

The original tweet by Rob Hutten said: "Saw a navy guy in Tim's today in uniform & HMCS Fredericton hat sporting a huge 'INFIDEL' tattoo on his right arm, stylized in the shape of a machine gun."

"The message is clear, and scary as hell."

Hutten has said he was offended by the tattoo and felt he had to publicize it because it was on the arm of an Armed Forces member.