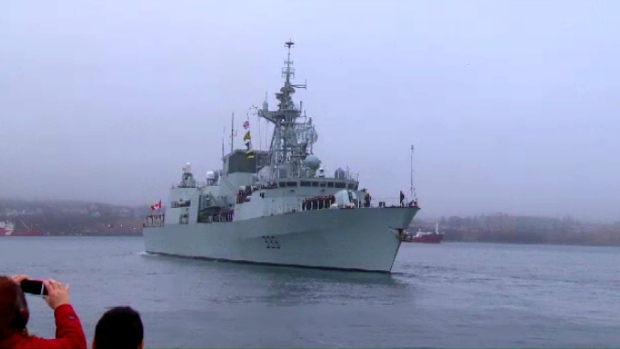 The Royal Canadian Navy says it has confirmed the identity of a sailor who was singled out on social media for his tattoo. The tweet said the man was wearing an HMCS Fredericton ball cap.

HALIFAX -- The Royal Canadian Navy says it has confirmed the identity of a sailor who was singled out on social media for his tattoo featuring the word "infidel" in the shape of a rifle.

Maj. Mark Gough of Maritime Forces Atlantic said late Friday afternoon that as a result, "the chain of command is investigating the matter further." He provided no other details.

Earlier, he said the navy received word about the tattoo from a Forces member who noticed a tweet from a Halifax coffee shop customer Tuesday and sent it to his superiors.

A photo in the tweet shows only a man's arm with the tattoo as he waits in line to be served. The tweet identified the man as being in uniform and wearing an HMCS Fredericton ball cap.

Gough said the military is concerned by any action or behaviour by a Forces member that would demonstrate intolerance or disrespect and is obligated to look into the circumstances.

"Some folks were offended by the tattoo," he said. "In this case, because it could be interpreted as being offensive to a certain culture, then we obviously have to look into it."

Gough said the issue will at some point be sent to the military's legal branch to determine whether any possible repercussions are warranted.

The Canadian Armed Forces does have dress instructions related to body tattoos and piercing. "Members are not to acquire any tattoos that are visible on the head, face or ears," the rules state.

"Additionally, members shall not acquire tattoos that are visible either in military uniform or in civilian clothing that could be deemed to be offensive (e.g., pornographic, blasphemous, racist or containing vulgar language or design) or otherwise reflect discredit on the CAF."

The tweet by Rob Hutten, which was taken down Friday afternoon, said: "Saw a navy guy in Tim's today in uniform & HMCS Fredericton hat sporting a huge 'INFIDEL' tattoo on his right arm, stylized in the shape of a machine gun. The message is clear, and scary as hell."

Reached for comment Friday, Hutten said he was offended by the tattoo and felt he had to publicize it because it was on the arm of an Armed Forces member. Hutten said he didn't talk to the man, who was standing with a couple of his friends at the time.

He said he has since been told by two people on Twitter that the sailor was the victim of an improvised explosive device in Afghanistan and got the tattoo because he was angry at the time.

"I have no hard feelings about this guy if he's not an Islamaphobe," Hutten said. "I don't want him fired, but he shouldn't be wearing that tattoo in public."