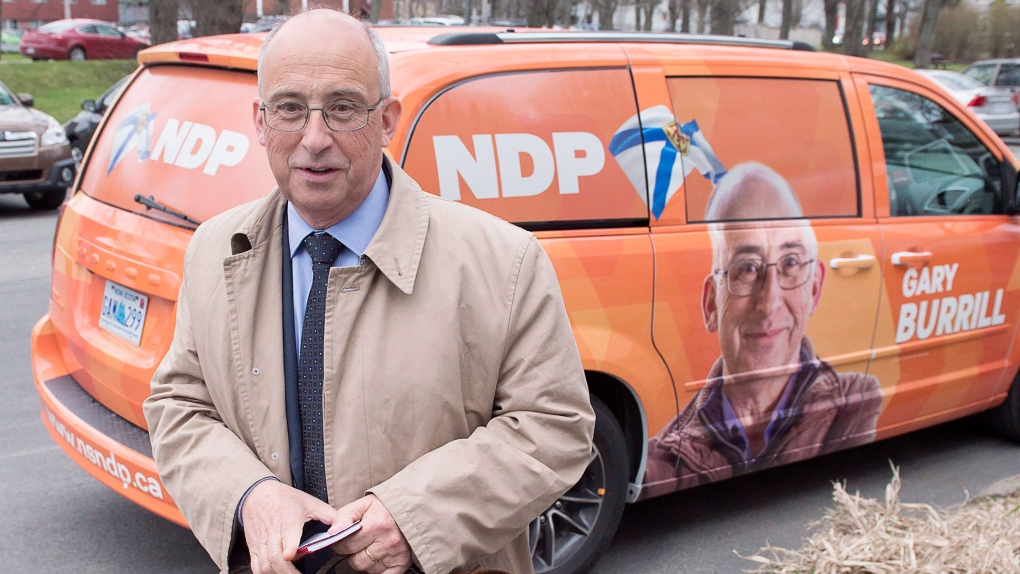 Nova Scotia NDP Leader Gary Burrill makes a campaign stop in Halifax on Monday, May 1, 2017. The provincial election will be held Tuesday, May 30. (THE CANADIAN PRESS/Andrew Vaughan)

HALIFAX -- Nova Scotia's New Democrats are touting a tax-the-rich plan they say will address growing income inequality in the province.

NDP Leader Gary Burrill said Tuesday he would raise taxes on Nova Scotia's wealthiest if elected May 30, creating the highest income tax bracket in the country.

On a day when the provincial Liberals pledged to overhaul major hospitals and the Progressive Conservatives promised funding for long-term care facilities, Burrill focused on creating a "fairer tax system."

"Income inequality in Nova Scotia has reached its greatest height," Burrill, a United Church minister, told reporters in Halifax. "Our taxation system is a primary means by which these kinds of inequities can be meaningfully dealt with."

The increase would push the combined tax rate to 57 per cent, the highest in Canada.

But with 45,000 people in Nova Scotia dependent on food banks, Burrill said it makes sense to tax the richest 3,700 people more.

Referring to a slogan used during the Occupy Wall Street movement, which took aim at the top one per cent of income earners in the United States, Burrill said the tax hike would affect a "fraction of the one per cent" in Nova Scotia.

"It's only a sign of a moral economy that we would ask those that are making over a quarter-million-dollars a year to make a larger contribution," he said.

Despite Burrill's promise to address food insecurity and income inequality, he skirted questions about where the revenues from the tax hike will be invested.

The tax increase is expected to generate an extra $20 million a year for provincial coffers.

Still, he said there will be "no higher priority than seeing in every household in the province there is enough money that everybody will be able to get their food from a grocery store rather than a food bank."

Much of the proposed work was already announced in the months leading up to the election call.

The one new item announced by McNeil was a plan to expand the emergency department at the IWK Children's Hospital.

McNeil said a Liberal government would provide $1.2 million for design work that would begin next year to modernize the department and double its size to meet growing demand.

"More and more people are walking through the doors, so we need to ensure that our facilities are modern and up to date so our health professionals can continue caring for our loved ones," said McNeil.

He said the expansion would lead to better gynecological and pre- and postnatal care for women, and to improved mental-health services for those aged 16 to 19.

Construction is to begin in 2019, although McNeil couldn't say at this stage how much the expansion would cost.

He said the funding loss has meant that senior care homes have had to compromise on the quality of food and services they provide to elderly residents. As an example, Baillie said staff at facilities like Northwood Manor have to supply meals for $5 a day and have to scrimp on things like fresh produce.

"Short-sighted, mean-spirited cuts one year after another are exactly the wrong way to ensure that we fulfil our obligation to our seniors," Baillie said. "Stephen McNeil took away the dignity and respect of seniors who live in long-term care facilities."