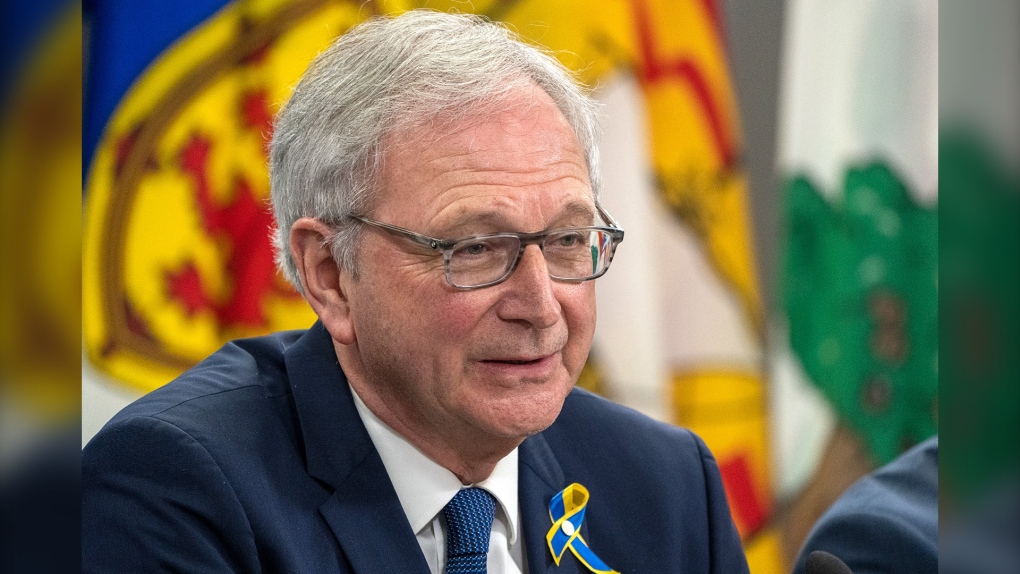 New Brunswick Premier Blaine Higgs fields a question at a meeting of the Council of Atlantic Premiers in Halifax on Monday, March 21, 2022. THE CANADIAN PRESS/Andrew Vaughan
FREDERICTON -

New Brunswick's Court of Appeal has ruled that the August 2020 snap election call that won Premier Blaine Higgs a majority government was legal.

In a decision released Thursday, the court dismissed advocacy group Democracy Watch's argument that the premier's early election call was illegal because of the province's fixed-date election law.

Writing for the three-judge panel, Justice Ernest Drapeau said there is no admissible evidence that the premier's decision to call a general election at that time came from "the pursuit of purely partisan electoral advantage."

Higgs triggered the vote two years ahead of New Brunswick's fixed election date because he said the province needed stability during the COVID-19 pandemic.

The premier called the election after opposition parties refused a proposal to support his minority government until the fixed election date in 2022 or until the end of the pandemic.

In October 2021, Court of Queen's Bench Justice Thomas Christie rejected Democracy Watch's bid to have snap elections declared illegal, but for different reasons than noted in the Appeal Court decision.

The Appeal Court disagreed with Christie's determination that the case should be dismissed on the grounds that the timing of an election is not a matter to be considered by the courts. Christie wrote at the time that in his view, "the matter borders on being considered frivolous."

Drapeau wrote in the decision that "most" of Democracy Watch's grounds of appeal are "well founded." However, the Court of Appeal determined that the argument should still be dismissed due to a lack of admissible evidence that Higgs called the election for "purely partisan" electoral advantage.

"Democracy Watch believes there was enough evidence for the Court of Appeal to rule that Premier Higgs violated New Brunswick's fixed election date law by calling the 2020 snap election at a time that favoured his party's election chances, but the court concluded there was not enough evidence to prove that he did, or didn't, call the election to favour the PC Party," Conacher said.

By Lyndsay Armstrong in Halifax

Prime Minister Justin Trudeau will be presenting the federal government's offer for billions in new health-care funding to the provinces and territories at a highly anticipated meeting in Ottawa today.

One-third of households say they're financially worse off compared to year ago: poll

A former London police officer was sentenced Tuesday to life in prison with a minimum term of 30 years for raping and sexually assaulting a dozen women over a 17-year period.

Canada’s yearslong shortage of veterinarians was exacerbated during the pandemic, as more people welcomed pets into their homes to add joy and companionship during lockdowns. Now, concerns around quickly accessing medical care for animals is more urgent than ever, says one vet.