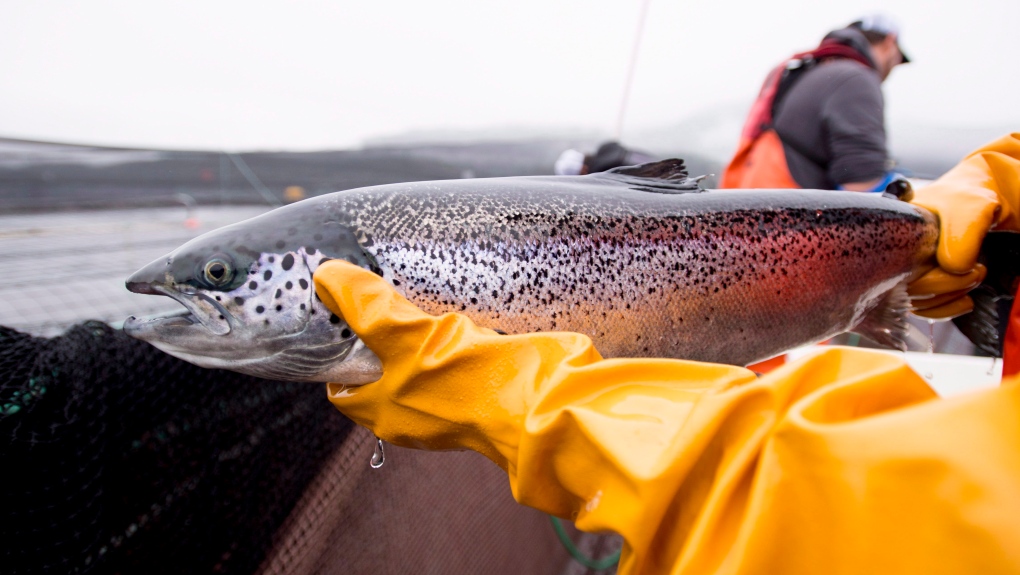 An Atlantic salmon is seen during a Department of Fisheries and Oceans fish health audit at the Okisollo fish farm near Campbell River, B.C. Wednesday, Oct. 31, 2018. A conservation group is calling for immediate action to address what they're calling "a dramatic decline" of Atlantic salmon in New Brunswick's Miramichi River. (THE CANADIAN PRESS /Jonathan Hayward)

FREDERICTON -- A conservation group is calling for immediate action to address what it's calling "a dramatic decline" of Atlantic salmon in New Brunswick's Miramichi River.

Mark Hambrook, president of the Miramichi Salmon Association, says new figures from the Department of Fisheries and Oceans show adult salmon returns to the river have reached an all-time low.

He said the numbers confirm the observations of association members over the past year.

"We were expecting bad news based on our observations and unfortunately that's what we received," Hambrook said in a release.

"The trend is the numbers keep spiralling downwards and action must be taken to reverse this."

Hambrook said the main reasons for the decline are predators, such as grey seals and striped bass, as well as warming of the river and illegal fishing.

"It's time for everyone to work together to ensure these problems get solved," he said.

Hambrook said he is particularly impressed with proposals put forward by First Nations partners to improve habitat and eradication of the invasive smallmouth bass.

In October, a coalition of conservation groups urged the federal government to agree to a plan to wipe out the bass from Miramichi Lake in order to protect salmon in the river.

The North Shore Micmac District Council, which represents Mi'kmaq nations in the Miramichi area, is leading the push to eradicate the invasive fish using a toxin called rotenone.

Hambrook said his group doesn't want the Miramichi to become like the St. John River, where there is neither a recreational fishery nor a First Nation food and ceremonial fishery.