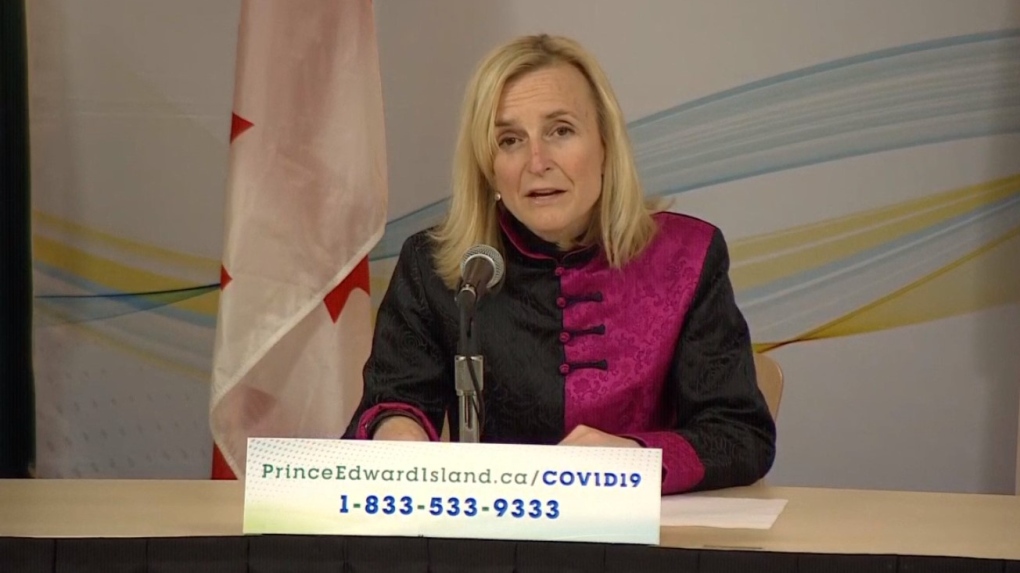 Dr. Heather Morrison said, so far, the province has completed over 1,000 tests for COVID-19, 140 of which were done on Thursday alone.

HALIFAX -- Prince Edward Island says there are no new cases of COVID-19 in the province, with the total number of cases remaining at 22.

“Just because we do not have a new case today, that doesn’t mean we should be complacent. In fact, it is the time we need to be just as vigilant as ever,” said Morrison during a news conference Friday.

Morrison said, so far, the province has completed over 1,000 tests for COVID-19, with close to 140 tests being done on Thursday alone.

There are four people considered recovered from COVID-19 on the island.

Morrison said 811 has hired close to 80 additional staff members, and there is an increase in training. They’re also receiving lots of calls through the island’s designated helpline at 1-833-533-9333.

“I expect the number of cases in P.E.I. to increase, and I expect that we will see cases in Prince Edward Island that will result in hospitalization, and that is why we’re working so hard with these public health measures and Health P.E.I. to prepare our system.”

“All Islanders, please remain diligent this weekend … if possible, stay at home, maintain physical-distance, and if you are self-isolating, do so,” she said.

“The better we are at implementing these measures, the better chance we have in P.E.I., not only to flatten the curve, but to, I’d like to think we can make it closer to a pancake. By doing something as simple as these measures, we can together save lives,” said Morrison.

Prince Edward Island's director of nursing, Marion Dowling, also reminded Islanders the cough and fever clinics are by appointment only through referral from a family doctor or nurse practitioner, or through 811.

She also advised anyone visiting the clinics to stay in their vehicle until being notified by staff to come in.

Both sites in Charlottetown and Summerside continue to see a rise in patients.

Dowling also said the assessment clinics are now providing telephone assessments for those who require them.

Prince Edward Island's Minister of Finance, Darlene Compton says, due to the excellent financial state the province was in before the COVID-19 pandemic, she doesn’t think it will be too hard for Islanders to bounce back.

“At the end of 2019, P.E.I.’s economy was out-performing the national average … our employment growth for 2019 was 2.6 per cent-- the second-fastest among provinces-- with more Islanders employed fulltime last year than every before,” said Compton.

“Because of our strong fiscal standing pre-COVID-19, and more importantly, of the resiliency of Islanders, we are going to be in a better position to bounce back together when this pandemic is behind us.”

Prince Edward Island Premier Dennis King, said in a news conference on Friday that although they have put in many measures to assist Islanders, they realize it isn’t necessarily a perfect solution.

“We have worked as a government to assist your employers, your employees, and we have established an emergency capital loan program,” said King. “We announced a rent deferral program. We wanted to work with landlords and those business owners who leased space, to defer payments at a minimum for three months. We will continually look to evolve our programme offerings in the days and weeks ahead."

King said, so far, almost 10,000 people have filed for Employment Insurance (EI) benefits in the past two weeks.

“That number will continue to grow. We are committed to doing everything we can to work with you, to get you through this, and we will get through this,” said King.

King also referred to the rent assistance subsidy announced by the Minister of Social Development and Housing, Ernie Hudson, on Thursday.

The temporary benefit was designed to provide rental assistance to those struggling to pay rent as a result of income loss or reduction due to COVID-19, providing $1,000 per household.

“This package that will see those impacted receive $500 in April, $250 each in May and June. Our program is designed this way because in April we know the federal assistance programs may roll out slower than what is needed,” said King.

“That is the same reason why we have offered a one-time $750 payment for those same individuals to help them get through until the federal programs are up and running.”

King said eligible tenants will have the benefit paid directly to their landlord, benefiting both the landlord and the tenant.

“We are working on the details of a financial package for students and that will be released early next week,” said King. “It will be targeted at those who are planning to go to a job that isn’t there now, those who were working part-time but now aren’t, and we are also looking at offering further assistance for those enrolling in post-secondary studies.”

King said Friday that any Islanders who were receiving rental assistance previously, have continued and will continue to receive that funding.

“If you're in a situation where your rental agreement is income based, and you have seen a decrease in your income, you can contact Social Development and Housing, and they will amend your financial arrangement accordingly,” said King.

On Thursday, the province announced a $25-million emergency contingency fund created to support Island workers, including the self-employed and small businesses.

Prince Edward Island’s Minister of Finance, Darlene Compton, said changes have been made to that fund for the better.

“Today, we are increasing the value of this fund to $40-million in anticipation of the evolving critical needs of Island families, workers, and businesses,” said Compton.

Compton also announced the province will be providing and option to defer provincial property tax and fee payments until December 31.

This means, property owners will have the option to defer all property taxes owing until December 31 for the continuity of local services and garbage collection.

“The province will continue to pay the municipalities’ fire stations and Island Wastewater Management Corp. for their tax and fee amounts as normal,” said King.