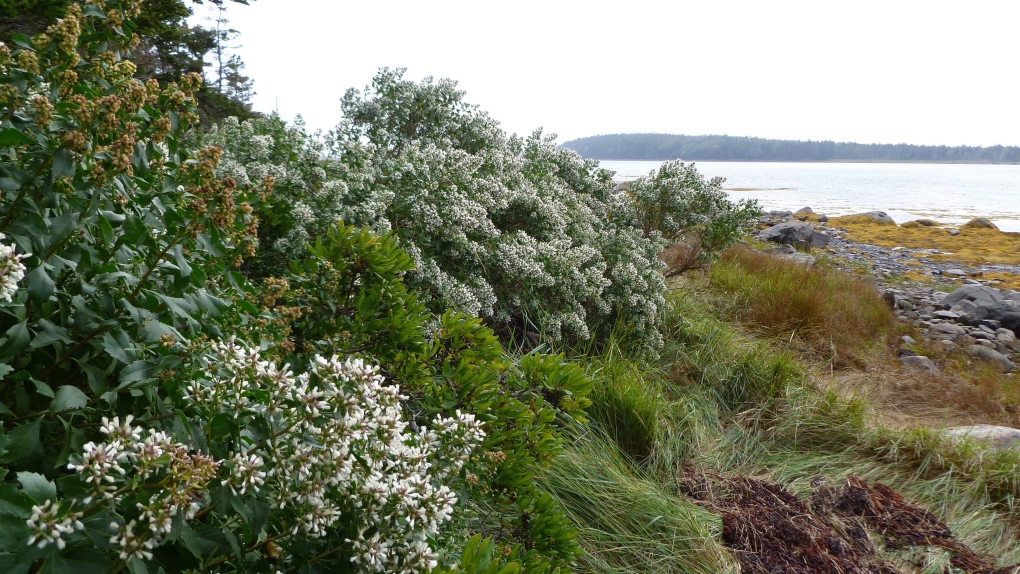 An eastern baccharis is shown in Lobster Bay, N.S., in this September 2017 handout photo. The rare plant grows only in Nova Scotia. (THE CANADIAN PRESS / Nature Conservancy of Canada, Anthony Crawford)

HALIFAX -- The Nova Scotia government is moving to give itself more powers to protect biodiversity, including wild animals, plants and water species through legislation it says is the first of its kind in Canada.

Lands and Forestry Minister Iain Rankin said Thursday the government currently doesn't have the authority or regulatory powers it needs to manage the province's biodiversity.

"This will be the first provincial legislation on biodiversity in Canada," said Rankin.

"The new act will compliment the province's wildlife act and the endangered species act and other existing legislation which are effective but don't address certain gaps that need to be bridged."

Rankin said the Biodiversity Act will create regulations that will help manage threats to rare ecosystems and better protect wildlife against invasive species.

He said the Wildlife Act mainly covers mammals, so legislation is needed to cover threats to other species including plants and invertebrates.

Proposed measures would allow the government to prevent the import, selling or distribution of an invasive species, and prevent the destruction or disturbance of rare ecosystems and habitats.

Rankin said there would also be the ability to create land management zones for set periods of time to support conservation efforts.

"For example, conditions may be put in place to protect the native ecology of a certain area, such as a certain bird species, while activities like tourism and camping can continue," he said.

Rankin said the legislation's current focus is Crown land, with possible regulations aimed at private land in the future.

Craig Smith, conservation program director with the Nature Conservancy of Canada, called the legislation a "positive and progressive" step.

"Generally the direction and framework this legislation provides is really going to set us up well to address some of imminent and emerging threats to native species and ecosystems," said Smith.

He said the yet-to-be-set regulations will be key when it comes to defining which species need further protection and in setting out the minister's powers to issue emergency orders around land use.

Smith said his organization wants to see measures for private land at some point, given there's more of it in Nova Scotia than Crown land.

"Biodiversity is in fact concentrated on private land," Smith said.

Ray Plourde of the Ecology Action Centre also lauded the legislation as an important first step.

"Biodiversity is in collapse around the world ... and it's largely driven by human beings," said Plourde.

He said had something like it been in place 20 or more years ago, the brown spruce longhorn beetle may not have been able to gain a foothold to ravage the province's spruce trees.

"If we had legislation, that could have meant for earlier intervention," Plourde said.