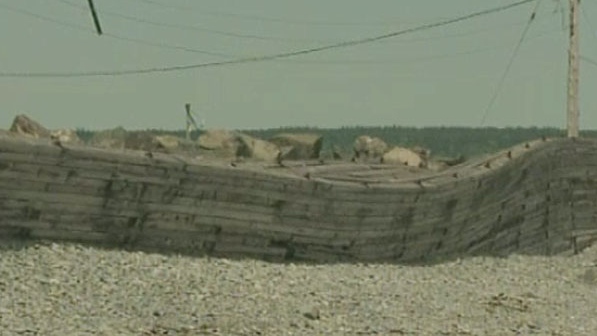 Residents of Gabarus, N.S. are concerned about the crumbling seawall in their community.

HALIFAX -- Funding commitments from three levels of government to help temporarily fix a crumbling seawall in a tiny Cape Breton village was welcomed Wednesday by a community advocate who has been calling for such repairs for years.

Enterprise Cape Breton Corp., a federal agency mandated to promote development in the region, said Wednesday it would contribute up to $300,000 to help fix the seawall that protects Gabarus from the pounding surf of the Atlantic Ocean.

That commitment came hours after the Nova Scotia government said it will do the same, pending federal involvement. The Cape Breton Regional Municipality has said it will also contribute $100,000 to the project.

"We are so happy that the governments have come together and understood that this is a protection for the people of Gabarus," Hayes said in an interview from her home in the village.

"We're talking about having one of our famous potluck suppers and going down and patting ourselves on our backs.

"There's some people here who are going to sleep better in their beds tonight."

The $700,000 budget to fix the seawall is based on an assessment last summer done by provincial engineers. The municipality is awaiting an updated engineering assessment before a final cost of repairing the north half of the 400-metre structure is worked out.

The wall was severely damaged by a storm in 2010 and the provincial government says repairs are urgently needed.

Residents of the 300-year-old fishing community and the Nova Scotia government have long argued that Ottawa, which built the seawall in the 1940s, owns the structure and is responsible for maintaining it.

But the federal Fisheries Department has repeatedly said the wall sits almost entirely on Nova Scotia-owned land and is therefore a provincial and municipal responsibility.

Marlene Usher, acting CEO of Enterprise Cape Breton Corp., said the funding commitment is not an admission of ownership.

"From ECBC's standpoint, we're looking at it as a community economic development project because of the community impact and because of the fishing activity in that port," Usher said in an interview from Sydney.

"We're not acknowledging any federal responsibility of ownership."

A group called the Friends of Gabarus has been working for years to find funding to replace the seawall, which would cost anywhere from $4.3 million to $5.3 million, according a 2012 provincial report.

Hayes, a member of that group, said with the height of hurricane season fast approaching, the safety of the village's residents is a priority.

"We're going to take what we have right now," said Hayes. "We can figure out who owns the seawall later."

The group recently filed a complaint with the federal Public Sector Integrity Commissioner's office, which investigates complaints of wrongdoing in the public sector, alleging that the Fisheries Department has neglected to fix the seawall.

The village has met in recent months to discuss emergency plans in the event of a breach of the deteriorating wall. The last breach in the early 1980s caused flooding that cut off homes in Gabarus.