HALIFAX -- Nova Scotia announced 31 new cases of COVID-19 on Monday, bringing the total number of cases in the province to 293.

This is the biggest one-day spike in cases in the province so far.

The province says 650 tests were completed at the QEII Health Sciences Centre's microbiology lab on Sunday.

Most cases of COVID-19 are related to travel or a known case, but community spread has been confirmed in the province.

Because of this, the provincial government says lab capacity will increase to allow for more testing. It is expected that 1,000 tests will be conducted each day, with the lab testing around the clock, starting Monday.

Dr. Robert Strang, Nova Scotia’s chief medical officer of health, also says travel has been removed as one of the screening requirements for assessment.

“Starting today, we’ll be looking for any Nova Scotians who have developed fever or a new or worsening cough,” said Strang during a news conference on Monday. “Those are the symptoms … that are the predominant symptoms of COVID-19.”

Nine people are currently in hospital. A news release previously stated that 10 people are in hospital, but Strang later clarified that number, saying that a total of 10 people have been admitted to hospital as a result of COVID-19. One person has since been released from hospital, so nine remain.

Sixty-four people have recovered from the virus and their cases are considered resolved.

There are cases across the province, with the central zone seeing the biggest spike. 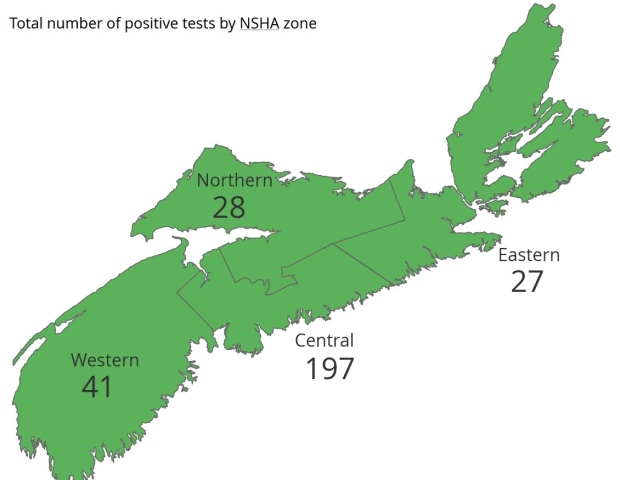 A temporary primary assessment centre is now operating in Elmsdale, N.S., and two mobile assessment centres are being established by the Nova Scotia Health Authority, to allow for community-based testing.

Anyone who develops COVID-19 symptoms, such as a fever, new cough or acute respiratory illness, is urged to limit their contact with others and take an online assessment questionnaire to determine if they should call 811.