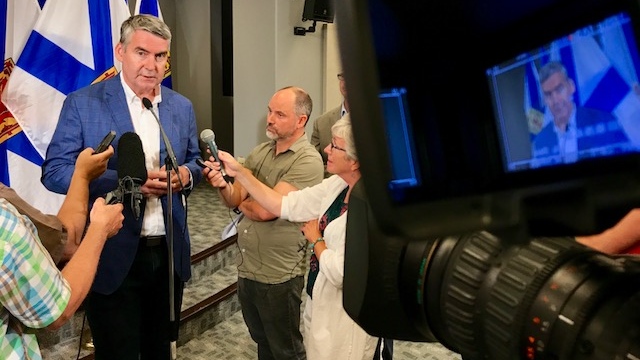 "Once we know what the final system is, then of course we'll take that to Nova Scotians, but we can't take a system to them ... without knowing what it's going to be," Premier Stephen McNeil said after cabinet Thursday. (CARL POMEROY / CTV)

HALIFAX -- With just a week left for provinces to submit their carbon pollution pricing plans to Ottawa, the Nova Scotia government says it will not share its proposal with the public.

Premier Stephen McNeil said Thursday that Nova Scotians won't be told what the plan looks like or what sort of regulations there will be.

He told reporters there's no point in showing it to Nova Scotians before the plan gets approved by Ottawa.

"Our system that we're sending in, it would need to be approved, that it meets all of the benchmarks set out by the federal government," said McNeil.

"Once we know what the final system is, then of course we'll take that to Nova Scotians, but we can't take a system to them ... without knowing what it's going to be."

According to the Nova Scotia government's website, implementing a cap-and-trade program would allow the province to reduce greenhouse gas emissions in a cost-effective way. It estimates about 20 companies would take part in a program.

It says the province has already reduced emissions by 30 per cent since 2005, and with a carbon pricing system in place it hopes to reach 46 per cent by 2020.

"The government has made a lot of noise over a long time about how they are valuing transparency, accountability, that everything is up front," he said. "And here we have one of the most important things about the economy of Nova Scotia, that in fact people aren't even going to get a glimpse of before it's gone off for its approval."

He said Nova Scotians should be able to see the original plan along with whatever changes may be necessary to ensure full transparency.

In Ontario, Premier Doug Ford recently made headlines with his plans to scrap their province's cap-and-trade system, and McNeil said he will be watching what happens next "very closely."

He added that he's proud of the steps Nova Scotians have made to reduce their emissions.

"I'm very proud of the work Nova Scotians have done through successive governments when it comes to the issue of ensuring that we continue to green our environment before this became fashionable at the national level," he said.

Ottawa says putting a price on carbon pollution is critical for Canada to meet its climate commitment under the Paris Agreement.

Provinces who wish to maintain or establish a carbon pricing system must submit an outline of their plan to the federal government by Sept. 1, and Ottawa will work with them to ensure the plan meets their standards.

Any province without a proposal that meets the benchmarks will have a federal program imposed on them.

The new carbon pricing plans will come into effect in January.