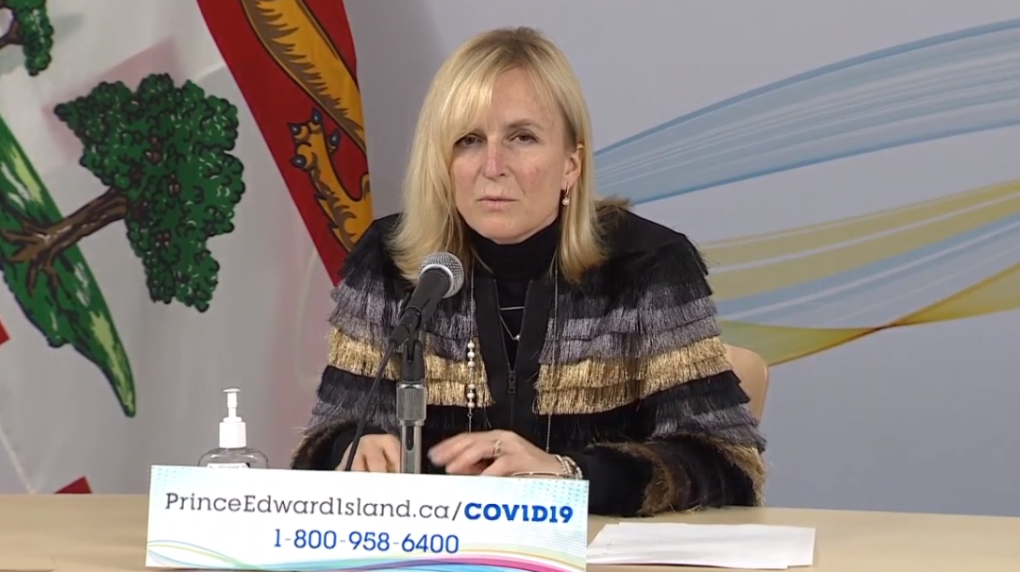 P.E.I. chief medical officer of health Dr. Heather Morrison provides an update on COVID-19 in the province on Jan. 12, 2021.

HALIFAX -- Prince Edward Island is reporting one new case of COVID-19 on Tuesday. One previously reported case is now considered recovered, as eight active cases remain in the province.

The new case involves a male in his 30s who had recently travelled outside of Atlantic Canada.

P.E.I. has reported a total of 103 cases of COVID-19 since the pandemic began in March. 95 cases are now considered recovered, leaving eight active cases in the province.

There have been no deaths or hospitalizations in P.E.I. as a result of COVID-19.

P.E.I. has reported a total of 81,653 negative test results as of Tuesday.

According to Morrison, P.E.I. is second in Canada in the rate of tests per capita, with a rate of 529 tests per 1000 population, well above the national rate of 386 tests of 1000 population.

Any passengers on the Air Canada Flight 8302 from Montreal to Charlottetown on Jan. 4, should monitor for symptoms and arrange for testing if symptoms develop.

Morrison says 4,226 doses of the vaccine have been adminsitered, which includes 1,154 second doses.

After one week in long-term care, Morrison says about 25 per cent of long-term care and community care residents have already received the first dose of the vaccine.

Morrison says by the end of this week, all long-term care residents and staff will have received their first dose of the COVID-19 vaccine, and will receive their second dose beginning the week of Jan. 25.

“Our plan to vaccinate seniors in care facilities as quickly as possible is done out of necessity,” said Morrison. “We know that across Canada, seniors in congregate living situations have been disproportionately affected by COVID-19, and I know we’ll all feel better when this group is immunized and protected against COVID-19.”

Morrison says all residents and staff of long-term care and continuing care facilities on the island will have received both doses of the COVID-19 vaccine by the end of February.

Beginning in early February, other individuals will be able to book appointments at vaccination clinics that will start in late February or early March. Morrison says that group includes over 85-years-old, adults in Indigenous communities, partners-in-care, and registered rotational workers and truck drivers.

Morrison says the next group to be vaccinated will be others in congregate living situations including group homes, community residential facilities, shelters and other priority groups including Indigenous adults and other health workers with direct patient care, such as family physicians and operating room staff.

By the end of March, Morrison anticipates everyone living and working in congregate living environments, and any health care workers who provide direct patient care will be vaccinated.

“It will take months for everyone to be vaccinated, but there will be vaccine for everyone. It would be ideal if we had enough product to offer everyone the vaccine in the next two months, but this is not the case," said Morrison. "So we are anxiously awaiting confirmation of increased vaccine supply in the spring, and I know the rest of the rest of Canada is in the same position. I will be clear, as we receive vaccine, it will be administered into the arms of islanders as quickly as possible.

While P.E.I. health didn’t ease any restrictions on Tuesday, an update is expected in the next two weeks.

“We have been looking at January 25,” said Morrison. "That would make sure that we have sufficient time to see any increase in cases following holiday travel, students arriving back to post-secondary institutions, New Year’s Eve celebrations, and those sort of things. The hope would be to ease them up if we can on that date.”

While she didn’t get into specifics, Morrison said potential examples of further eased restrictions could include allowing household groups plus 20 additional people, and larger groups for sporting events and faith gatherings, although no specific number was given.

"Should we continue on this trajectory that would put us in a good position to look at easing restrictions here on the Island first," said King during Tuesday's news update.

Canadians aren't staying home as much as they did during the first wave, data shows

Ontario reports fewer than 3,000 new COVID-19 cases for first time in a week as more cases of U.K. variant found

Severe cases of COVID-19 could be associated with poor gut health: scientific review

Blood kits sent to 48,000 Canadians to survey extent of COVID-19

Should you be wearing a mask while outside? Experts say it depends